The global robotic endoscopy devices market size was valued at USD 1.21 billion in 2018 and is anticipated to expand at a CAGR of 20.0% over the forecast period. Growing preference for Minimally Invasive Surgical (MIS) procedures, recent product approvals by regulatory bodies such as the U.S. Food and Drug Administration (FDA), and high prevalence of chronic diseases are the major factors driving the growth.

The majority of market participants focus on expanding their product line by getting product approvals from the respective regulatory agencies, such as the U.S. FDA and the European Union’s CE marking. For instance, in March 2018, Auris Health announced the FDA clearance of its Monarch Endoscopy platform. In 2014, Flex Robotic System developed by Medrobotics received CE mark approval. Medineering GmbH, a Munich-based company, received the CE approval in February 2018, for its endoscope robot. 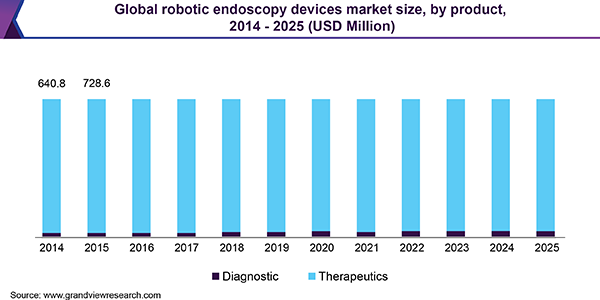 Several robotic endoscopy devices are in the developmental stage and are expected to be launched in the forthcoming years. For instance, K-FLEX, a flexible, remote endoscopic surgery robot developed by KAIST was undergoing porcine trials in September 2018. Additionally, Master and Slave Transluminal Endoscopic Robot, a flexible robotic endoscopic platform is under development by Endomaster Pte Ltd, Singapore.

These devices are developed to overcome the limitations of standard diagnostic and therapeutic procedures. The benefits of such devices in surgical procedures include fewer complications post-surgery, faster recovery time, and minimal scars, thereby reduction in the duration of hospital stays. These benefits associated with robotic endoscopy devices are anticipated to be a prominent factor for its adoption.

As the majority of the robotic endoscopy devices are used in various surgical procedures, thus the growing number of robotic surgery procedures is expected to support the growth of the robotic endoscopy devices market. During the Annual Minimally Invasive Surgery Symposium (MISS) 2016, the surgeons reported that the number of robotic general surgery procedures in the U.S. was nearly 140,000 in 2015 and is constantly witness significant growth with each passing year.

In 2018, the therapeutic segment held the largest market share of 97.0%, attributed to the rising adoption of robotic endoscopy devices for surgical intervention and a growing number of market players developing novel robotic endoscopy devices for various surgical procedures. Following the introduction of the Da Vinci Robotic Surgical System by Intuitive Surgical Inc., the acceptance of robotic-assisted surgery has increased significantly.

The rising adoption of the robotic platform in the medical sector has encouraged prominent players to develop robotic endoscopy devices. Some of the key companies include TransEnterix Surgical, Inc.; Auris Health (Johnson & Johnson); Medineering GmbH; Medrobotics Corporation; and others.

The diagnostic segment is expected to witness the most lucrative CAGR of 24.6% over the forecast period, attributed to increasing development and approvals of robotic endoscopy devices for various diagnostic procedures. For instance, the Monarch Platform by Auris Health (Johnson & Johnson) is indicated for a bronchoscopy. Technological innovation is anticipated to further fuel growth. For instance, Storm Lab U.K. has a robotic platform for providing a safer alternative to standard colonoscopy for patients with Inflammatory Bowel Disease (IBD).

Laparoscopic procedures emerged as the largest segment and were valued at USD 946.0 million in 2018. A growing number of robotic laparoscopic surgeries is one of the major factors contributing to the growth. Factors such as rising geriatric population, demand for laparoscopic diagnostic and therapeutic procedures, and unhealthy lifestyle are expected to further propel the market.

Robotic endoscopic platform with bronchoscopy applications can be beneficial for patients with lung lesions that may require a biopsy before surgical resection, immunotherapy, or stereotactic radiation. With the recent launch of robotic platforms for bronchoscopy, the adoption is anticipated to witness a moderate pace. For instance, in June 2018, UPMC Hamot, a hospital in the U.S. started utilizing the Monarch platform for lung cancer diagnosis.

The colonoscopy segment is anticipated to expand at the fastest CAGR of 33.5% over the forecast period. A large number of developmental stage devices for colonoscopy applications is one of the factors driving growth. Additionally, a high prevalence of inflammatory bowel diseases, such as Crohn’s disease, ulcerative colitis, and colorectal cancer is anticipated to support the growth.

Hospitals accounted for the largest revenue share in 2018. Hospitals are the primary care options in a lot of countries, which is one of the significant factors driving the growth of the segment. Furthermore, the availability of funds for the hospitals in the developed regions coupled with the growing adoption of robotic endoscopy devices for various types of surgical procedures is contributing to market growth. For instance, in April 2018, Medineering GmbH announced the successful clinical use of its robotic endoscopy devices across various university hospitals in Germany and Northern Italy.

The number of robotic-assisted laparoscopy procedures is witnessing growth in hospital settings. Moreover, well-established hospitals in developed countries provide training to physicians on robotic surgery. Additionally, rising patient awareness about the benefits of robotic systems is also anticipated to propel the demand in hospital settings. 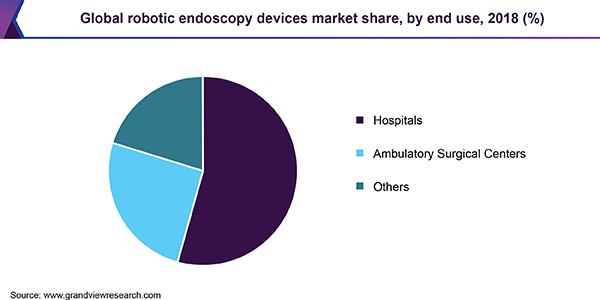 The ambulatory surgical center's segment is expected to expand at the fastest CAGR CAGR 21.5% over the forecast period. The growing adoption of robotic devices in ambulatory surgical centers, especially in developed countries such as the U.S. is anticipated to be one of the key factors boosting growth. The rising patient inclination toward minimally invasive procedures is expected to further boost the growth.

In 2018, North America dominated the global market, accounting for 59.9% of the revenue share. The U.S. accounted for the largest regional revenue share and is expected to continue its dominance over the forecast period. The key factors boosting the growth include the presence of a well-established healthcare sector, the financial capability of the hospitals to invest in robotic endoscopy devices, general awareness about robot-assisted medical procedures, and the presence of a large number of market participants in the region.

Asia Pacific is expected to register the fastest CAGR of 12.9% over the forecast period. The factors such as rising disposable income, healthcare expenditure, and prevalence of chronic diseases are expected to drive the regional demand. Additionally, the growing adoption of robotic systems in the healthcare facilities is expected to fuel the demand.

Intuitive Surgical, Inc.; TransEnterix, Inc.; Auris Health; Medineering GmbH; and Medrobotics Corporation are some of the major market players. R&D investments, collaborations with other industry participants, and new product launches are among the key strategies adopted by these players for gaining a competitive edge.

This report forecasts revenue growth at global, regional, and country levels and provides an analysis of the latest industry trends in each of the sub-segments from 2014 to 2025. For this study, Grand View Research, Inc. has segmented global robotic endoscopy devices market report based on product, application, end-use, and region: