The global root beer market size was estimated at USD 728.1 million in 2021 and is anticipated to grow at a compound annual growth rate (CAGR) of 4.6% from 2022 to 2030. The market growth is driven by the increasing demand for low-alcoholic beverages, the rising popularity of root beer among millennials, and the growing foodservice market globally. The outbreak of Coronavirus disrupted the global root beer supply chain and distribution channel owing to the closure and restrictions on bars, restaurants, and hotels globally. According to the 2020 ProWein Business Report, the COVID-19 affected around 77% of hotels, with turnover declining by 60% across the sector, while restaurants saw sales decline by 91% by the end of 2020. 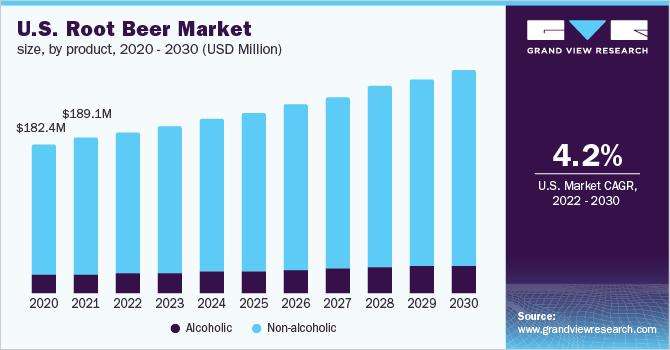 The alcoholic product segment is expected to grow at the fastest CAGR over the forecast period. The increasing demand for low alcoholic beverages is expected to drive the growth of the segment. Traditional alcoholic root beer contains 0.5 to 2% Alcohol By Volume (ABV), but few brands, such as Not Your Father’s Root Beer, offer hard root beers, which have a high ABV value of over 5.9%. The root beers were initially made without alcohol in them. But, due to the consumers changing behavior and preference for low-alcoholic drinks, companies started incorporating alcohol in them. Various brands in the market also offer hard root beer. A few of them are AB-InBev Best Damn Root Beer, Abita Bayou Bootlegger, and Jed’s Hard Root Beer.

The conventional segment accounted for the largest share of more than 82.5% of the global revenue in 2021. Conventional root beer is typically non-alcoholic or with a low ABV value (less than 2%). It is mostly consumed in the North America region. Traditional root beers were made of root bark of sassafras (a North American species of tree). Sassafras is the primary flavor and main ingredient in conventional root beers. Sassafras was banned by the Food and Drug Administration in 1960 owing to the presence of safrole (a carcinogenic component) in sassafras. Most commercial root beers now available in the market contain the artificial flavoring of sassafras.

However, some companies, such as Hansen Beverage, use safrole-free sassafras extract to retain the authenticity of root beer. The diet type segment is expected to grow at a steady CAGR over the forecast period. Diet root beers, such as sugar-free, low-sugar, caffeine-free, gluten-free, and more, are gaining popularity among consumers owing to the growing health and wellness trends. In addition, growing westernization in Asia Pacific and other regions is further expected to accelerate the segment growth. Companies, such as Keurig Dr. Pepper Inc., The Coca-Cola Company, Dad’s Old Fashioned Root Beer, and Boylan Bottling, offer diet root beers, such as zero sugar, zero-calorie root beers.

The off-trade distribution channel segment dominated the market with a revenue share of 70.9% in 2021. The off-trade distribution channel includes root beer merchants, supermarkets, hypermarkets, retail outlets, caterers, beer/specialty stores, and e-commerce platforms. Consumer inclination towards e-commerce is expected to drive segment growth. This sales channel has seen more growth as compared to the on-trade channel. The pandemic-induced lockdown boosted product sales through off-trade channels. According to a 2020 Drink Analysis report by the International Wine and Spirit Record (IWSR), around 80% of alcohol sales in the U.S. were generated from the off-trade channel. Factors, such as work-from-home policy followed by most companies, strict rules in pubs & bars like wearing a mask, and anxiety related to COVID-19, have driven consumers to off-trade channels. 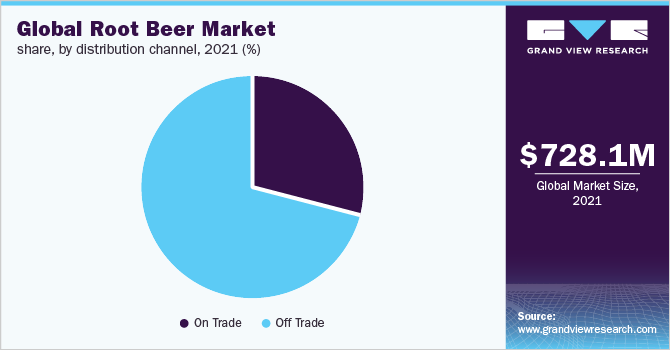 Supermarkets & hypermarkets dominated the off-trade segment. These retail chains have been offering various deals, such as discounts on product prices, which is another factor propelling the demand for root beer via the off-trade distribution channel. The on-trade segment is expected to grow at a steady CAGR over the forecast period. The on-trade distribution channel includes outlets like bars, clubs, restaurants, hotels, and coffee shops. The COVID-19 pandemic affected the growth of the on-trade segment drastically, owing to the shutting down of the aforementioned outlets. Moreover, international tourism came to a standstill due to strict lockdown and preventive measures across the globe.

North America dominated the global market and accounted for a 41.3% share of global revenue in 2021. The U.S. is the leading consumer of root beer in North America. Soft root beer is popular among consumers in the country. However, increasing consumer inclination towards low-alcoholic beverages with distinct flavors is driving the demand for hard root beer in the region. Hard root beers typically have an ABV of 5 to 6%. The U.S. is the largest consumer of root beer in the world. This drink is native to the U.S. as it was traditionally made using the root bark of the sassafras tree, which is mainly grown in the U.S. This non-alcoholic beverage became popular during the prohibition period in the U.S. in the early 19th century.

The increasing awareness about health and wellness is also expected to drive the product demand in the country. The Europe market is anticipated to grow at a significant CAGR over the forecast period. Countries, such as Germany and the U.K., have high consumption compared to other countries in the region. Growing consumer inclination towards healthy foods & beverages owing to the rising health and wellness awareness is a major factor driving the demand for root beer. It is considered healthier compared to other soft drinks available in the market. The region has the presence of the world’s most health-conscious population.

Consumers in European countries are increasingly becoming aware and more knowledgeable regarding health. Consumers in the region are opting for premium healthy and organic products. Growing trends in the food and beverage sector, such as vegan foods, sugar-free & low-calorie food, among others, are influencing people to choose diet drinks over conventional drinks. This shift in consumer behavior is driving the demand for diet root beer. Companies are focusing on developing new diet root beers owing to changing consumer demand. For instance, in July 2021, Warped Wing Soda Co. announced that it will be soon releasing a caffeine- & gluten-free non-alcoholic root beer.

The global market is characterized by the presence of numerous well-established players. Companies are increasingly focusing on new product development to gain a higher market share. For instance, in 2020, Reed’s Inc., came back with its Limited-Edition Bavarian Nutmeg Swing-lid Root Beer under its brand Virgil’s in Germany. New product launches, mergers & acquisitions, and geographical expansion are some of the key strategies adopted by market players to strengthen their industry position. For instance, Not Your Father’s Root Beer, an American brand, is developing innovative root beer with high alcohol percentage. Some of the prominent players in the global root beer market include:

This report forecasts revenue growth at global, regional, and country levels and provides an analysis of the latest industry trends in each of the sub-segments from 2017 to 2030. For the purpose of this study, Grand View Research has segmented the global root beer market report based on product, type, distribution channel, and region:

How big is the root beer market?

What is the root beer market growth?

Which segment accounted for the largest root beer market share?

b. North America dominated the market with a share of 41.3% in 2021. This is attributable to increasing consumer inclination towards low alcoholic beverages with distinct flavors.

Who are the key players in the root beer market?

What are the factors driving the root beer market?

b. Key factors that are driving the root beer market growth include increasing demand for low-alcoholic beverages, the rising popularity of root beer among millennials and women, and the growing foodservice market globally.