The global rubber tired gantry crane market was valued at USD 1.08 billion in 2016 and is expected to witness significant growth over the forecast period. Multiple advantages, such as low operating costs and technological advancements, are expected to stimulate the usage of these products. Technologies such as automation and wireless communication are enabling the market to attain operational efficiencies.

Emerging economic countries including Mexico, Columbia, India, and China, among others, are expected to provide adequate opportunities for market growth. The increasing trend of transshipments has led to the development of port infrastructure in these regions due to the rise in container traffic.

Favorable government initiatives for the development of ports, such as port capacity expansion and infrastructure development, are impelling the demand for rubber-tired gantry cranes. The expansion of the Panama Canal has further led to an increase in global container shipping traffic that enables ports to employ high capacity container handling equipment. The high cost of installation and maintenance services is expected to restrain the market. Moreover, the upgrading of existing equipment adds to the expense of the organization.

The growing population in emerging economies has led to an increase in the demand for goods and raw materials. This has subsequently contributed to a significant increase in trade volumes across the developing regions, thereby leading to investments in the development of port infrastructure. Furthermore, the increase in vessel size due to rising trade volumes has led to the implementation of sophisticated container handling equipment such as rubber-tired gantry cranes. These cranes offer effective container management capabilities owing to high operational efficiency.

The 16-wheeler RTG segment is expected to emerge as the fastest-growing segment and is presumed to grow at a CAGR of 6.1% from 2017 to 2025. The low maintenance costs incurred due to the low cost of spare parts is a significant factor for the growth of these products. Moreover, a large number of wheels lead to convenient maneuverability and increased driver safety.

Regions such as the Asia Pacific have witnessed a surge in inter-regional trade due to an increase in exports, mainly from China and India. This has enabled the regional government to invest in the development of port infrastructure to manage the incoming and outgoing container traffic. Furthermore, governments in various regions are inclined toward port expansion. For instance, in 2015, the Hong Kong government announced plans to expand the container capacity at Kwai Tsing Container terminal to cater to the growing transshipment cargo in this region.

Diesel-powered RTG dominated the global market and was valued at USD 724.3 million in 2016. Electric RTG is anticipated to be the fastest-growing segment, registering a CAGR of 9.9% over the forecast period. 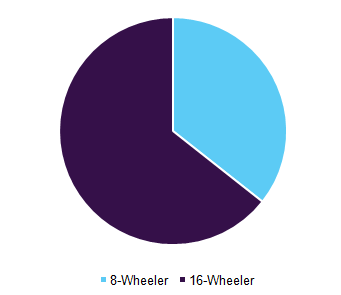 Electric RTGs reduce the need for engine component maintenance. They are able to save up to 600 liters of engine oil per year. They have a lower maintenance cost and reduced downtime. Regions such as Europe, where the government has imposed strict regulations regarding air pollution and emission control, have witnessed increased adoption of electric RTGs. They help in reducing company expenses by eliminating the usage of hydraulic and engine oil.

MEA is expected to be the fastest-growing region, registering a CAGR of over 5.3% over the forecast period. The Asia Pacific region dominated the market and was valued at over USD 486.8 million in 2016.

Ports in Europe have adopted electric RTGs to reduce pollution and greenhouse gas emissions. Government regulations in this region, such as verification of carbon emission in maritime transportation, have enabled the adoption of electric container handling equipment. Furthermore, financial transparency regarding port investments has enabled port authorities to make strategic investments in port infrastructure.

The market comprises a small number of players that hold a large market share. Retaining market share is the key area of focus for these players. Market competitors have laid emphasis on developing efficient products that work on alternate sources of energy, such as electric and hybrid cranes. The changing macro-economic factors, such as import-export taxation and government regulations, also create a huge impact on market players.

This report forecasts revenue growth at global, regional, and country levels and provides an analysis of the industry trends in each of the sub-segments from 2014 to 2025. For the purpose of this study, Grand View Research has segmented the Rubber-Tired Gantry (RTG) crane market on the basis of type, power supply, and region.