The global sailing jackets market size was valued at USD 119.2 million in 2018 and is projected to expand at a CAGR of 6.7% during the forecast period. An increasing number of sailing events organized by various organizations is one of the major market drivers. Rising participation in small sailboat racing, yacht racing, yacht cruising, power boating, motor boating or cruising and other such activities is expected to further fuel the demand for sailing jackets.

According to the Outdoor Industry Association, the sustainability of sailing jackets has been gaining significance among recreationists. A significant part of the purchasing decision of U.S. consumers depends on product sustainability. The manufacturers are also taking up the responsibility to meet environmental standards and animal welfare. The Responsible Down Standard (RDS) certification has become essential for the North American and European apparel manufacturers. This regulation aims to safeguard the animals used for sourcing down and feathers. The companies are focusing on environment-friendly insulation technologies for these jackets. 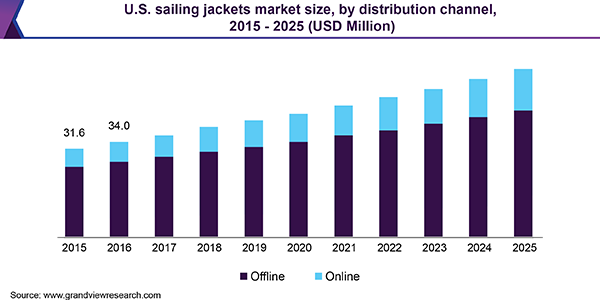 Over the past few years, consumer preference is shifting toward Perfluorocarbons (PFC) free products. PFC is the commonly used chemical for the production of waterproof outdoor apparel including sailing jackets. However, PFC as it is non-biodegradable. The textile producers are replacing PFC by hydrocarbon polymer-based and bio-based chemistries for the production of waterproof jackets. Major companies have been producing PFC free jackets as per the consumer demand.

Sailing is one of the most popular recreational activities in developed countries including the U.S., France, and U.K. According to the Sports and Fitness Industry Association (SIFA), around 62% of the sailors from the U.S. have a household income of more than USD 75,000 per year. However, marine sports associations are encouraging middle and relatively lower-income consumers to participate in this sport. They are launching affordable events and training programs, especially in emerging economies such as Asia Pacific. Such initiatives are expected to fuel the marine sports industry and thus, in turn, expand the scope of application for outdoor apparel such as sailing jackets in the upcoming years.

In 2018, men held the largest market share of more than 60% in terms of revenue. According to a sailing survey of the U.S., more than 60% of the male participants sail 15 or more times annually. The gender gap is higher in the economies from Asia Pacific. Therefore, men’s sailing jackets have a little larger market in Asia Pacific as compared to North America and Europe. The male application segment is anticipated to continue holding the leading market share over the forecast period.

The kid application segment holds the smallest share of the global sailing jackets market. However, this segment is expected to witness significant growth in the near future. Over the last few years, several associations including Willamette Sailing Club, Manchester Sailing Association, Mullaghmore Sailing club, and OziOpti have been encouraging kids’ participation in this sport by organizing various events. For instance, OziOpti, an Australian company focusing on a junior sailing yacht, has started affordable dinghies rental and training plans to increase kid's participation in sailing. Such initiatives are projected to fuel the demand for kids’ sailing jackets in the upcoming years. 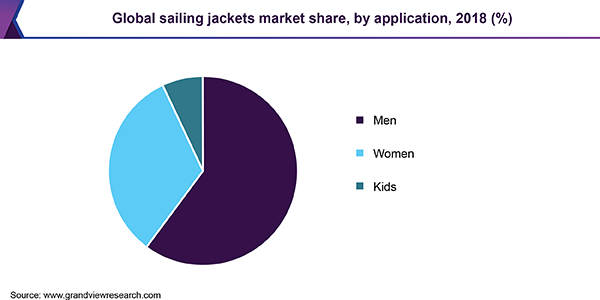 The women application sector is expected to register the fastest CAGR of 7.3% from 2019 to 2015. Yachting is gaining significant popularity among women across the world. Increased initiatives taken by the water sports institutions have been contributing to the increased number of women sailors. The World Championships organizes more than 30 events annually only for women. In 2016, the United Kingdom Sailing Academy (UKSA), a maritime training provider, launched a career program for women to encourage them to take up the sport as a profession. These initiatives are expected to fuel the demand for women’s sailing jackets in near future.

Online distribution channel is projected to expand at the fastest CAGR of 8.6% from 2019 to 2025. Amazon, Wetsuit Outlet, and Sailing Pro Shop are some of the prominent online suppliers of sailing jackets. The rising number of smartphones and internet users has been boosting the number of online shoppers across the world. The smooth shopping experience along with easy payment methods are expected to attract more consumers to opt for online retail. Furthermore, these distribution channels are gaining remarkable popularity among the working population owing to the convenience the online stores offer over brick and mortar stores. Leading manufacturers sell products through their own online portals to directly connect with the consumers, which helps them understand their requirements and feedback.

In 2018, North America held the leading market share of more than 40%. Recreational yachting is one of the most popular leisure activities in the U.S. Rising participation in marine sports activities has strengthened the industry in this region. Furthermore, the lenient regulations have fueled the adoption of yachting as a sport. As a result, the demand for yachting equipment and clothing including jackets has witnessed significant growth. In addition, the presence of a large number of water sports associations has prompted the consumption of sailing jackets in this region.

Europe held a significantly high share of the market in 2018. Croatia, Italy, Greece, Turkey, France, Spain are the most popular yachting destinations in Europe.

Asia Pacific is expected to expand at the fastest CAGR of more than 8% from 2019 to 2025. China, Australia, Vietnam, Thailand, and South Korea are the prominent regional markets for sailing jackets. A growing number of marine sports activities and availability of affordable training programs are expected to accelerate the regional market growth.

This report forecasts revenue growth at global, regional, and country levels, and provides an analysis of the latest industry trends in each of the sub-segments from 2015 to 2025. For the purpose of this study, Grand View Research has segmented the global sailing jackets market report based on application, distribution channel, and region: