The global sclerotherapy market size was valued at USD 848.8 million in 2019 and is expected to grow at a compound annual growth rate (CAGR) of 5.6% from 2020 to 2027. Sclerotherapy is a minimally invasive procedure used for the treatment of spider veins or varicose veins and involves injecting the veins with sclerosing agents like detergents, chemicals, and osmotic agents. It causes shrinking of the veins and reduces the damage or appearance of them. Factors such as the growing patient geriatric population, rising incidence of varicose veins, technological advancements pertaining to venous diseases, and growing demand minimally invasive procedures are driving the market. The introduction of ultrasound-guided sclerotherapy and foam sclerotherapy has enabled practitioners to carry out these procedures even in the most painful and underlying veins with precision and care. Primary varicose veins is a condition wherein the congestion is caused in the superficial venous system and may lead to eczema and stasis dermatitis. 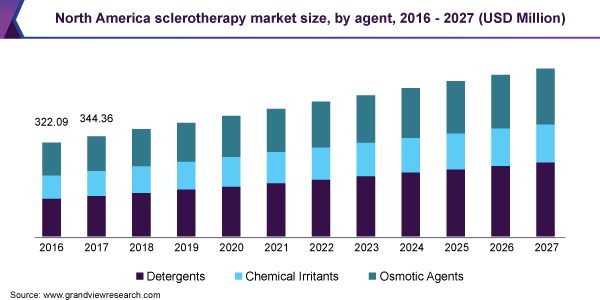 This condition is curative and can be treated by a dermatologist wherein an irritating medication is injected into the vein to induce endothelial damage, inflammation, fibrosis, occlusion, and eventually absorption of the offending smaller vessels. In industrialized countries, more than 30.0% of women and about 10.0% of men consult for venous insufficiency signs and symptoms in legs. Factors like heredity, excess weight, and some professions requiring a prolonged period of standing or sitting may increase the risk of developing a chronic venous disease of the legs. Long term varicose veins and thrombosis lead to skin lesions, skin pigmentation, chronic edema, dermatitis, eczema, and ulcer. According to the Society of Vascular Surgery, more than 33.0% of women and about 17.0% of men consulted a doctor for telangiectasias and varicose veins in industrialized countries, affecting up to 35.0% of people in the United States and Europe.

The treatment of sclerotherapy is widely used to treat varicose veins as it is a minimally invasive procedure and has minor side effects like temporary pigmentation and burning. The sclerotherapy treatment proves to be effective in 87.0% of the cases, according to Mayo Clinic. However, the treatment can cause matting, scarring, and allergic reactions in some patients, which might hinder the market growth. Moreover, the advent of advanced treatment options for varicose veins like endovenous laser ablation, radiofrequency ablation, conventional operation, and subfascial endoscopic perforator surgery are likely to hinder the market growth.

The detergents segment held the largest market share of 42.0% in 2019 and is expected to reciprocate the highest CAGR over the forecast period. Based on the agent, the sclerotherapy market is segmented into detergents, chemical irritants, and osmotic agents. Detergents sclerosing agents are used for the treatment of spider telangiectasias in various concentrations ranging from 0.05% to 0.5%. These detergents work by the mechanism known as protein theft denaturation by causing endothelial damage or desquamation of endothelial cells in plaques through interference with cell surface lipids. The most common type of detergents is Sodium Morrhuate (SM), Ethanolamine Oleate (EO), Sodium Tetradecyl Sulphate (Sotradecol), Polidocanol, and Scleremo.

Detergents are widely used during the treatment of varicose veins and mostly all the detergent sclerosing agents are FDA approved, have higher efficiency, and low risks or side effects associated during the injection. Many studies have been conducted regarding direct toxic effects of the Detergent sclerosing agents on the formed elements of blood and it was found that the addition of SM, EO, STS, or POL to citrated plasma did not cause clotting, resulting in higher adoption of the agent.

A foam with detergent sclerosants allows a more efficient sclerosant effect by increasing both dwell time and contact area while minimizing the admixture of sclerosant and blood. This increase in efficiency allows lower sclerosants doses. Ultrasound-guided foam sclerotherapy is an upcoming therapy which allows the doctor to monitor the effect of each injection while ensuring the safety of all adjacent structures and effective is more effective as compared to a liquid therapy.

North America dominated the market and accounted for a revenue share of 46.1% in 2019 and is expected to showcase a significant CAGR in the forecast period. This is attributed to increasing R&D investments and the presence of global players. According to the Society of Vascular Surgery, more than 33.0% of women and about 17.0% of men consulted a doctor for telangiectasias and varicose veins in industrialized countries, affecting up to 35.0% of people in the United States and Europe. More than 40.0 million people in the U.S. suffer from varicose veins and almost 50.0% of them had a family history. Factors like increasing technological advancements in venous diseases, high geriatric population suffering from varicose veins, and the minimally invasive nature of the treatment have fuelled the market share in the region. 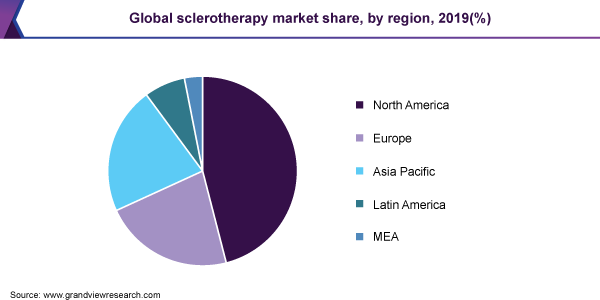 In APAC, the market is expected to witness the highest CAGR of 6.9% over the forecast period due to the escalating geriatric population and sedentary lifestyle in developing economies, namely India and China. According to NewsGram, 7.0% of India’s youth suffers from varicose veins due to a sedentary lifestyle. In countries like China, 100.0 million people suffer from varicosities and 40.0 percent of them are affected with varicose veins of the lower limbs. These are the factors that are expected to drive the market in the region over the forecast period.

The market is highly competitive in nature. One of the key factors driving the competitiveness among market players is the rapid adoption of advanced technologies like foam therapy and ultrasound-guided sclerotherapy. Moreover, a prominent number of these players are rapidly opting for strategic expansions and collaborations for increasing their geographical presence and increasing sales volume in emerging and economically favorable regions. For instance, in March 2016, Merz Pharma and AngioDynamics, a leading provider of innovative and minimally invasive medical devices for vascular access, surgery, and peripheral vascular disease, signed an agreement. According to this agreement, Angiodynamics will serve as the exclusive distributor of Asclera (polidocanol) Injection used for the treatment of spider veins within the vein market in the U.S. Some of the prominent players in the sclerotherapy market include:

This report forecasts revenue growth at global, regional, and country levels and provides an analysis of the latest industry trends in each of the sub-segments from 2016 to 2027. For the purpose of this study, Grand View Research has segmented the global sclerotherapy market report on the basis of the agent, type, and region:

How big is the sclerotherapy market?

What is sclerotherapy market growth?

Which segment accounted for the largest sclerotherapy market share?

b. North America dominated the sclerotherapy market with a share of 46% in 2019. This is attributable to rising geriatric population with varicose veins, high technological advancements pertaining to venous diseases, and high acceptance of minimally invasive procedures.

Who are the key players in the sclerotherapy market?

What are the factors driving the sclerotherapy market?

b. Key factors that are driving the sclerotherapy market growth include a rising global geriatric population with an increased incidence of varicose veins, high technological advancements for the treatment of venous diseases, and high demand for less invasive procedures.