The global scratch resistant glass market size was valued at USD 3.46 billion in 2016 and is expected to witness rapid growth owing to rising demand in smartphone manufacturing. The demand for scratch resistant glass will be driven by the introduction of premium smartphones and high-quality televisions that find increased usage of these products equipped with added strength.

The market is expected to witness high growth owing to a substantial increase in the shipments and sales of smartphones. Increasing adoption of advanced technology by smartphone manufacturers is expected to act as the major driver for market growth. The smartphone industry is majorly driven by developing economies such as India, China, and South Korea owing to increasing disposable incomes and changing lifestyles.

Germany is one of the major countries in Europe with high smartphone penetration. It contributed to more than 12% of market share in Europe in 2016. The growing trend among consumers to purchase multifunctional devices is expected to boost the demand for scratch resistant glass over the forecast period. The demand is expected to grow rapidly owing to manufacturers offering new display technologies at affordable prices.

The smartphone screen protectors that are available at low price points are expected to disrupt the market of scratch resistant glass. The increased retail presence of these products and the ease of application are the major factors driving the demand for these screen protectors. The high penetration of these products and presence of this glass type in premium smartphones is expected to negatively impact the market growth.

Tablets are the second fastest growing application segment growing at a CAGR of 10.4% from 2017 to 2025. The growing demand for laptops and increase in the average screen size of smartphones is responsible for low penetration of scratch resistant glass in this application segment. However, the demand is expected to grow over the forecast period on account of the introduction of new products with enhanced features and increased toughness. The growing usage of tablet screens in industrial applications is expected to further augment the demand for tablets over the forecast period.

The demand for wearable smart devices is growing at a rapid pace is expected to be a major consumer of scratch resistant glass over the forecast period. The introduction of new products by companies such as Fitbit, Garmin, and Apple is expected to have a positive impact on market growth.

North America was the largest market for scratch resistant glass and accounted for 35.2%, in terms of revenue, in 2015. Technological advancements coupled with a high adoption rate of new technologies are expected to play a key role in increasing the demand for these products over the forecast period. 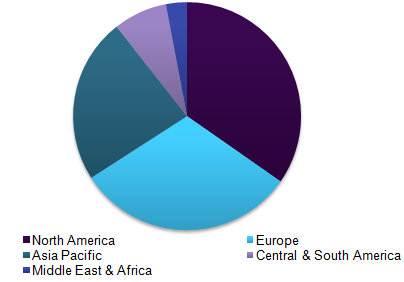 The growing innovation in the glass sector coupled with rising investment in research and development in countries such as UK, Germany, and France is driving the consumption of scratch resistant glass in Europe. The digitalization revolution is benefitting the manufacturers in the region as the requirement for high performance glass with high toughness is expected to increase rapidly.

Asia Pacific is one of the fastest growing regions backed by growing population and rising disposable incomes in countries such as China, Japan, and India. The presence of a large number of smartphone manufacturers in the region is expected to boost the consumption of scratch resistant glass over the forecast period. The favorable government initiatives in emerging countries such as Indonesia and Philippines aimed at boosting manufacturing activity is expected to have a positive impact on the market growth of scratch resistant glass.

The industry is highly concentrated owing to the presence of few manufacturers.  The major manufacturers are Asahi Glass, Corning Glass, Nippon Electric Glass, Guardian, Kyocera and Schott Glass. The other players in the market are Rayotek, Rubicon Technology, Crystalwise Technology, Crystran, Saint-Gobain and Swiss Jewel.

The major features of the competitive environment comprise rapid new product development and technological innovation. Companies are investing heavily in the development of new products to maintain their stronghold in the market. End-users are investing heavily in the research projects of industry participants which are expected to heat up market competition in the future.

This report forecasts revenue growth at global, regional & country levels and provides an analysis on the industry trends in each of the sub-segments from 2014 to 2025. For the purpose of this study, Grand View Research has segmented the global scratch resistant glass market on the basis of application and region: