The global self-healing materials market size was estimated at USD 291.4 million in 2018, growing at a CAGR of 46.1% from 2019 to 2025. Growing demand for advanced self-repairing polymers from end-use industries and the ability of materials to repair damages caused due to mechanical friction are the factors estimated to drive overall market growth in the forecast period.

The self-healing materials produced by hydroxyl end-functionalized polydimethylsiloxane (HOPDMS) and poly diethoxy siloxane (PDEs) are used to prevent the substrate from external environmental impact. Also, the introduction of self-healing microcapsules containing rejuvenator has resulted in a decrease in crack formation in asphalt formulations. 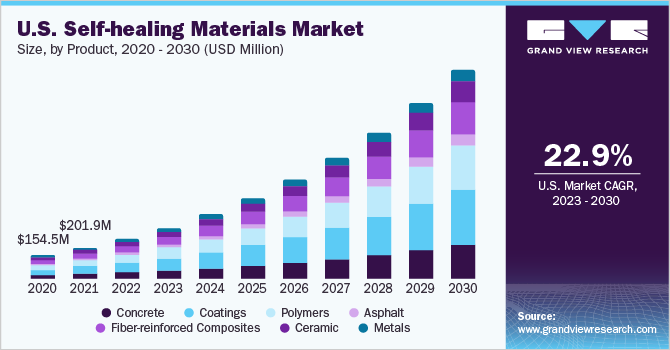 The U.S. self-healing materials market is expected to witness notable growth over the forecast period owing to the growth in the construction sector in the country. Increased demand for energy-efficient construction solutions is one of the primary factors driving the market growth. Besides, the high adoption of the product in the application industry is expected to drive growth.

Factors such as the high cost of such products coupled with the presence of the number of substitutes are estimated to restrain the overall market growth. Besides, limited awareness of the products primarily across the less developed economies is expected to limit the market growth over the next seven years.

Securing competitiveness, profitability, and scaling up from pilot scale to industrial scale productions are major challenges estimated to have an impact on the industry growth over the forecast period. However, the rise in the capital expenditure by the companies in the industry is expected to open up new avenues for market growth over the forecast period.

The coatings segment accounted for 27.3% of the total market share in 2018 and is estimated to reach 28.3% market share by 2025 on account of the rising demand for the product from automotive and aerospace industries. An increase in the operation lifetime of paints and coatings coupled with the reduction in the maintenance cost is expected to emerge as the major factor driving growth.

The polymers sector is estimated to grow at a CAGR of 46.4% from 2019 to 2025, on account of its rising use in the plastic industry and engineering activities. Polymers are extensively used owing to their ability to repair micro-scale damages and restore the passive state of the substrate thereby resulting in increased adoption.

The self-healing concrete is estimated to grow at the fastest pace with a CAGR of 48.4% over the forecast period owing to its durability & strength coupled with the high use of the product in critical applications in the building & construction industry. Also, rising demand from construction sectors mainly in Europe and the Asia Pacific is estimated to boost concrete demand in the future.

Reversible polymer technology emerged as the leading segment for the industry and is estimated to grow at a CAGR of 44.5% from 219 to 2025. The factors such as the rising demand from the medical sector on account of heightened application scope are expected to drive the industry growth. Besides, superior rebinding offered by the aforementioned products is expected to benefit the industry.

The microencapsulation technology is estimated to register notable gains owing to its ability to repair polymeric composites after being injured by chemical and mechanical progressions. Microspheres are present in the compounds that release their contents at a suitable time which leads to superior healing of the surface. The high use of such products across applications is expected to drive growth.

Capsule-based technology is a new substitute to the conventional repairing techniques, with its working dependent on the potential of the existing developed microencapsulated agents, size of microcapsules, and required healing efficacy. The segment is expected to realize notable gains on account of the increasing application in the growing building & construction industry.

Biological material systems are exclusively used in medical implants with the sector estimated to witness a CAGR of 47.5% in the forecast period. Also, the growing geriatric population is anticipated to increase the demand for biological self-healing material which is further expected to benefit the industry growth over the forecast period.

The building & construction segment dominated the market accounting for 33.4% of the total demand in 2018. Growth in the usage of the materials in the non-residential construction segment is expected to drive the market over the forecast period. Also, the rise in the growth of the application of such materials in the B&C sector is expected to bode well for the industry. 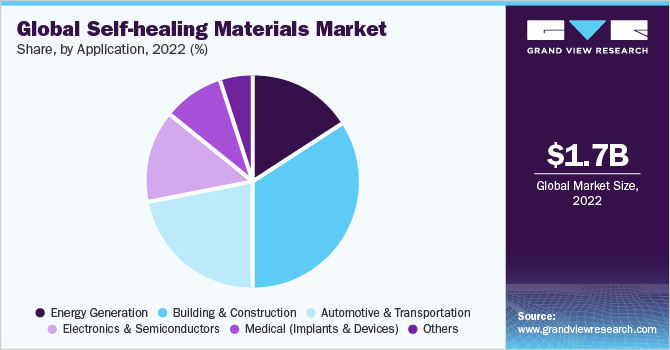 The Automotive & transportation sector emerged as one of the major applications for the products on account of the rising affinity of the consumers towards the lowering of the maintenance cost of the paints. For instance, Ford developed a new technique of self-healing film that protects the car from damage and scratches, which is expected to be implemented on a commercial scale.

The self-healing materials are exclusively used in the energy generation industry in ionic conductors, insulators, and electrical conductors, power generation, and oil & gas refineries. Moreover, electronics companies such as Samsung and Apple are using self-healing materials in mobiles, laptops, and desktops which are expected to drive their demand over the forecast period.

Europe dominated the self-healing materials market accounting for 31.1% of the total market share in 2018. High use of self-repairing specialty polymers in several countries like France, UK, and Germany coupled with process innovation, advanced R&D, and expansion of automobile production across the region are estimated to fuel the industry growth over the forecast period.

North America is the second-largest consumer of self-healing materials, followed by the Asia Pacific, on account of rising demand from end-user industries. The U.S. dominates the North American market, in terms of consumption, owing to the high demand from the residential sector, extensively developed manufacturing industry, and government initiatives towards infrastructure development.

Initiatives by the Government of Mexico to increase foreign direct investments in the semiconductor industry are estimated to boost the growth of the microelectronics manufacturing industry. This is presumed to boost the demand for semiconductor coating, positively affecting the consumption of self-healing materials in North America.

Asia Pacific market is estimated to exhibit a CAGR of 51.9% over the forecast period, owing to the massive potential of the construction industry in the region. The construction industry in the Asia Pacific is estimated to exhibit exponential gains on account of rising per capita income, rapid urbanization, and a growing population, which is further expected to promote industry growth.

The major players in the market are focused on inorganic growth through the enhancement of its technology and product portfolio to provide next-generation solutions to its customers. The key strategies approved by key players comprise partnerships with third-party distributors and research institutes for enhancing their position in the global industry.

Companies have started focusing on developing multifunctional coatings owing to the increase in the competition among the market players. For instance, BASF SE obtained a patent for self-healing coatings. This includes a cured coating which is estimated to be implemented in several sub-segments of its product portfolio which is further expected to improve the company share.

This report forecasts revenue growth at global, regional & country levels and provides an analysis of the industry trends in each of the sub-segments from 2014 to 2025. For this study, Grand View Research has segmented the self-healing materials market based on the product, technology, application, and region: