The global ship-to-shore cranes market size was valued at USD 2.17 billion in 2016 and is expected to gain traction over the forecast period. The growth can be attributed to numerous factors such as growing container traffic, vessel sizes, and transshipment activities. The steady and optimistic market conditions have led to numerous initiatives in the port industry to upgrade not only ship-to-shore (STS) cranes but also the quay, depth, and other port cranes (RMGs/ RTGs). 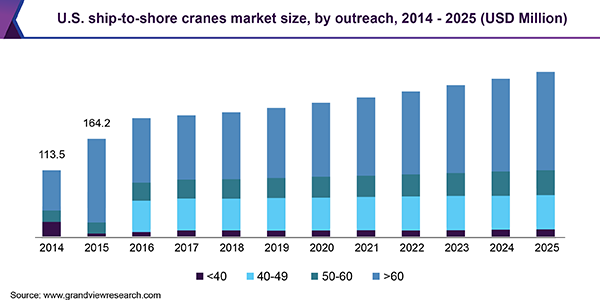 While the Asia Pacific maintained its position as the largest contributor, Latin America and the Middle East are also driving the demand. An important characteristic of these regions is the investment in the Greenfield projects and the growing amount of private investments for port infrastructure development. The uncertain economic conditions and the high investment costs required for these cranes can hinder market growth to an extent over the forecast period.

Major companies focus on capacity management of STS cranes, when there is a rise in container throughput, by heightening, strengthening, and extending them. Upgrades in existing machines are the preferred option for such companies, as it enables cost savings.

Expansion of the Panama Canal catered to the growing demand for maritime trade by providing an additional route to accommodate container vessel traffic. It has led to the expansion of ports in regions, such as Latin America. It has also increased exports to the Asia Pacific and North America. Furthermore, port expansion has favored the installation of ship-to-shore cranes to manage the container throughput.

Automation plays a remarkable role, as it enhances driver safety and container management efficiency. Technologies, such as Electronic Load System (ELC) and Ship Profiling System (SPS) enable safe transfer of containers from a ship to a port.

The >60 STS crane is expected to expand at the fastest CAGR of 6.4% over the forecast period. This growth can be attributed to the upgrades in existing STS cranes to improve their container handling capacity.

Longer outreach enables a ship-to-shore crane to carry out faster container transport with fewer moves. The Asia Pacific region is expected to favor the growth of the >60 STS crane segment, owing to an increased number of containers in the region. According to the World Bank Organization, in 2014, container traffic in India was 11,655,635 TEU and this figure is anticipated to grow over the forecast period. Thus, the regional installation is expected to surge in near future.

The electric segment emerged dominant in the global ship-to-shore cranes market. It was valued at USD 1.06 billion in 2016. The segment is anticipated to register the fastest CAGR of 5.8% over the forecast period. 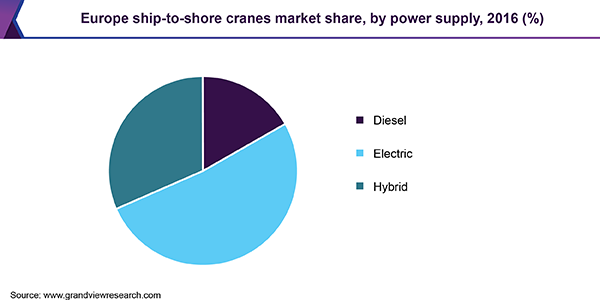 Electric STS cranes do not require frequent maintenance. This helps in reducing expenses for a company. They also eliminate the use of the engine and hydraulic oils, as they are powered by electricity. Increased government regulations to control and prevent pollution have led to a rise in the adoption of these machines. Technological advancements have enabled low energy consumption, which has further stimulated demand.

The Asia Pacific is expected to be the fastest-growing regional segment. It is anticipated to expand at a CAGR of over 5.8% over the forecast period. The increased demand for goods has led to an exponential rise in container traffic in the region. This factor is anticipated to stimulate port expansion in various parts of Asia Pacific.

STS cranes are essential parts of the port infrastructure that forms a crucial aspect of logistics transport across the world. The growing container traffic in the Asia Pacific has stimulated governments in the region to invest in port expansion. This is anticipated to foster the installation of these machines as they play a crucial role in container handling activities.

The market comprises a smaller number of key players with large market shares held by individual organizations. The barriers to entry are many and new players find it difficult to compete. Acquisition or partnerships with large companies are the primary strategies adopted by most companies to grow and remain competitive.

The competition is fierce and the key players share resources and exploit economies of scale through collaborations. Market players, such as Shanghai Zhenhua Heavy Industries Co., Ltd., adopt the non-conventional supply chain approach, which involves the shipping of an entire crane to the destination. This approach aids in saving time and reducing installation costs.

This report forecasts revenue growth at the global, regional, and country levels and provides an analysis of the latest industry trends in each of the sub-segments from 2014 to 2025. For this study, Grand View Research has segmented the global ship-to-shore cranes market report based on outreach, power supply, and region: