The global smart biopsy devices market size was valued at USD 2.40 billion in 2018 and is anticipated to expand at a CAGR of 5.6% over the forecast period. Increasing the adoption of minimally invasive surgical procedures coupled with a high prevalence of various types of cancer is expected to drive the demand for smart biopsy devices.

Smart biopsy assists in cancer diagnosis and helps distinguish healthy cells or calluses from tumorous cells. The procedure is performed by interventional radiologists and the diagnostic department to identify diseases for a healthcare institution such as medical clinics, diagnostic centers, and hospitals. There are more than 100 types of cancers classified by their different organs such as malignant melanoma of the colon and rectum, and more. Various types of biopsies such as incision and excision, skin, shave, center needle, fine needle aspiration, and vacuum-assisted biopsies are used for the diagnosis. 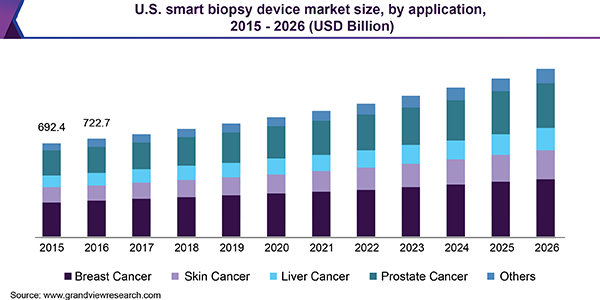 Besides, rising awareness about various diseases, especially among women coupled with an unhealthy lifestyle is expected to propel the smart biopsy device market. According to the National Center for Biotechnology Information (NCBI), in Europe, cervical cancer is one of the most common cancers among women, mainly among women above 45 years of age. In 2015, a twitter campaign called #SmearForSmear was launched to encourage women about cervical cancer screening.

According to the World Health Organization (WHO), breast cancer is another common disease occurring in women due to changing reproductive patterns, increased life expectancy, and the adoption of the western lifestyle. In middle- and low-income countries, the majority of women die from breast cancer. According to Breastcancer.org, 268,600 new cases of invasive breast cancer are diagnosed in the U.S. After skin cancer, breast cancer is the most commonly diagnosed disease among women. As part of national control plans, WHO promotes breast cancer control programs to increase awareness about the diagnosis to detect early signs and symptoms. Therefore, a growing number of cancer awareness campaigns are expected to increase the demand for preventive diagnostic procedures, thereby driving the growth of the smart biopsy devices market.

The breast cancer segment dominated the market because it is the most common cancer diagnosed among women aged 45 years and above. This cancer develops in breast cells which typically forms either in lobules (glands that produce milk) or ducts (pathways which bring milk from glands to nipples). Breast cancer had several symptoms such as breast pain, pitted skin over the entire breast, blood discharge from nipples, inverted nipples, and swelling in the underarm area. In low- and middle-income countries, due to lack of awareness among women, breast cancer is the most common. Thus, increasing awareness among women, in addition to growing availability and affordability of diagnostic procedures, is expected to drive the demand for smart biopsy devices in the breast cancer segment.

The skin cancer segment is expected to expand at the fastest CAGR in the forthcoming years owing to the increasing number of patients suffering from malignant skin tumors. Skin tumor is an abnormal growth of cells in the epidermis (outermost skin layer) caused due to unrepaired DNA damage leading to mutations. These mutations lead the skin cells to multiply rapidly and develop a malignant tumor. There are two main causes of skin cancer High exposure to UV radiation and the use of UV tanning machines can cause multiple mutations in the skin cells. In the U.S., skin cancer or melanoma of the skin is the most commonly diagnosed disease. The U.S. FDA had approved the MELAFIND device for the treatment of skin cancer, which is used as a tool for biopsy. Growing awareness regarding skin cancer coupled with rising availability and affordability of diagnostic procedures is expected to drive the segment growth soon.

North America dominated the market for smart biopsy devices in 2018, owing to the increasing prevalence of cancer, raising awareness about cancer screening programs, the presence of well-established healthcare facilities, and the availability of early diagnostic procedures in the region. Cancer is the major cause of morbidity in North America. Thus, a growing number of technologically advanced minimally invasive biopsy procedures are expected to fuel the regional demand for a smart biopsy device. 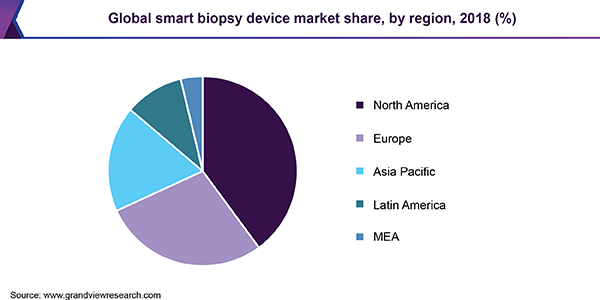 Asia Pacific is expected to register the fastest CAGR over the forecast period, due to increasing government initiatives, healthcare spending, awareness campaigns regarding cancer, and availability of technologically enhanced smart biopsy devices. The Indian government had announced two major initiatives in the healthcare sector, namely, Ayushman Bharat program and National Health Protection Scheme. Also, the National Breast Cancer Awareness Month (NBCAM) organized by major breast cancer charities in the U.S., helps create awareness regarding the causes and prevention of breast cancer. All these factors are projected to fuel the regional demand for smart biopsy devices.

The major market players are Becton, Dickinson, and Company (BD); C. R. Bard, Inc.; B. Braun Melsungen AG; Cook Medical; INRAD Inc.; and PLANMED OY. These key players focus on launching innovative smart biopsy devices, growth strategies, and technological advancements. For instance, in December 2017, BD completed the acquisition of C. R. Bard, Inc. with annual revenue of USD 16 billion. Through this acquisition, the company expanded its healthcare product portfolio boosting its chances to compete with other global healthcare leaders. Such advancements are anticipated to boost the market growth over the forecast period.

This report forecasts revenue growth at global, regional, and country levels and provides an analysis of the latest industry trends in each of the sub-segments from 2015 to 2026. For this study, Grand View Research has segmented the global smart biopsy devices market report based on application and region: