The global smart clock market size was valued at USD 469.2 million in 2018 and is projected to expand at a CAGR of 25.4% from 2019 to 2025. Rising awareness about the Internet of Things (IoT) coupled with improved standards of living is expected to boost the demand for luxury household products, such as smart clocks. 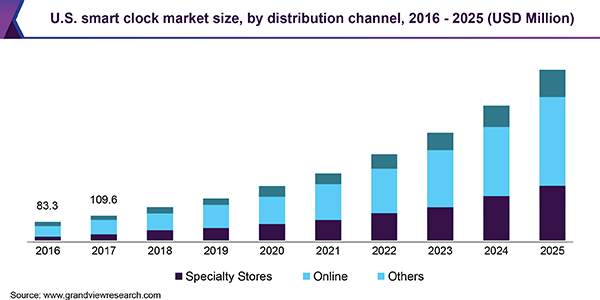 Moreover, the industry participants are incorporating the latest technologies in their products. For instance, in October 2016, Kickstarter, PBC, launched a ground-breaking voice-controlled and AI-assisted smart alarm clock. Asia Pacific is expected to be the fastest-growing regional market at a CAGR of 26.4% from 2019 to 2025.

North America was the largest market in 2018 and is projected to expand further retaining its leading position throughout the forecast years. The online distribution channel was the largest segment in 2018 and accounted for more than half of the overall market share. Specialty stores is expected to be the fastest-growing distribution channel segment over the forecast period.

The online segment led the global smart clock market in 2018 accounting for more than half of the overall share. The rising number of internet and smartphone users, especially in developed countries, boosts the segment growth. In addition, e-commerce platforms including social media and Google Ads have an essential role in influencing consumer preferences. Specialty stores are expected to be the fastest-growing distribution channel from 2019 to 2025. 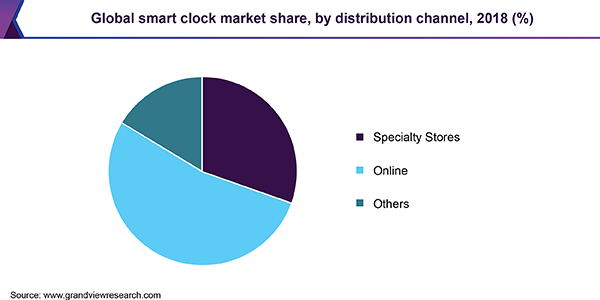 In developing countries, such as India, Thailand, Vietnam, Bangladesh, and China, unorganized retail is one of the primary distribution channels. In addition, major retail chains like Reliance Digital, Croma, and Vijay Sales are focusing on establishing new stores, which is projected to support segment expansion. For instance, in June 2019, Reliance Industries launched 100 new stores across India under the brand name Reliance Digital.

North America was the largest market in 2018 and accounted for a share of more than 35% owing to increased demand for home automation products. Major manufacturers, such as Amazon, Lenovo, SDI Technologies, Vobot Smart Alarm Clock, and Kickstarter, are developing new products to gain a maximum customer base. For instance, in January 2018, SDI Technologies, Inc. launched an innovative Google Assistant built-in smart clock under the brand name ‘iHome iGV1’. This factor is likely to boost the region’s growth further.

However, Asia Pacific is expected to be the fastest-growing regional market. It is projected to expand at a CAGR of 26.4% from 2019 to 2025. Increased consumer purchasing power in emerging economies, such as China and India, is expected to be the key factor responsible for the region’s growth. Moreover, rising awareness about IoT in countries like Singapore, Japan, and South Korea, is expected to offer numerous opportunities for the market participants.

This report forecasts revenue growth at global, regional, and country levels and provides an analysis of the latest industry trends in each of the sub-segments from 2015 to 2025. For the purpose of this study, Grand View Research has segmented the global smart clock market report on the basis of distribution channel and region: