The global smart syringes market was valued at USD 4.75 billion in 2015. The high growth is anticipated on account of the increasing prevalence of various target diseases, the increase in the number of vaccinations, the growth of the geriatric population, and the need to prevent hospital or clinic-acquired infections.

In 2014, the data published by the WHO suggests that each year over 16 billion injections are administered across the globe. Nearly 90% of them are utilized for curative care while 5% is used for immunization, and the remaining 5% account for blood transfusions and intravenous administration of drugs and fluids. 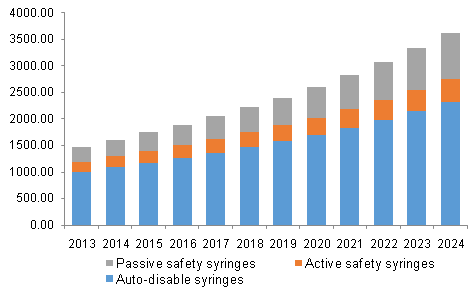 Moreover, the WHO is taking significant measures for promoting the usage of smart syringes across all the countries by 2020, and this factor is expected to positively reinforce the smart syringes market over the next seven years.

According to the estimates published by the United Nations in 2012, the global geriatric population count was estimated to be nearly 809.4 million, which is anticipated to reach nearly 1.13 billion by 2022 and exceed a value of over 2 billion by 2050.

Owing to the age-associated risk factors and the continual adoption of unhealthy lifestyle practices, the elderly population is expected to suffer with chronic diseases and as a result, this upward trend in diseases is expected to boost the usage rates of smart syringes over the forecast period.

These syringes are widely preferred for the routine administration of drugs and fluids as they are equipped with a safety mechanism, which prevents their re-use; thus, negating the possibility of disease transmission through previously used syringes.

However, the passive safety syringes segment is expected to emerge as the fastest-growing category with a CAGR of 9.8% from 2016 to 2024. The relatively fast growth of this segment is attributed to their ease of use, increased patient safety due to the automatic activation of the safety feature, and the prevention of infection transmission achieved with these syringes.

The global smart syringes market is segmented on the basis of its applications, such as drug delivery, vaccination, and blood specimen collection. In 2015, the drug delivery segment accounted for the maximum revenue share and is further expected to drive the smart syringes market growth over the forecast period. Increase in the prevalence of target diseases and the existent, high unmet needs of vaccination across the emerging economies are expected to accelerate the market growth over the forecast period.

The market is segmented based on its end-user into hospitals and HMOs, diabetic patients, family practices, psychiatrists, and others. Hospitals and HMOs held the largest market share in 2015, and this segment is expected to grow at a lucrative CAGR over the forecast period. Increase in the demand for outpatient and inpatient hospital services is expected to reinforce the market growth over the next seven years.

In 2015, North America accounted for the largest share valued at nearly 43%. The high share is attributed to the increasing awareness about needle stick injuries, the continual improvements in healthcare practices, the presence of a huge geriatric population base, and the existence of well-developed primary and secondary healthcare centers across the region.

By 2022, Asia Pacific is expected to emerge as the fastest-growing region with a CAGR of 9% from 2016 to 2024. Increases in the public and private healthcare expenditure levels to support efforts in curbing disease transmission and improve patient care are amongst the key reasons favoring the market growth over the forecast period.

Moreover, the risk of needle stick injuries and hospital-acquired infections is very high in this region and significant efforts are being undertaken by the WHO and various other government agencies to reduce the spread of infections, which is in turn expected to boost the smart syringes market over the forecast period.

Becton, Dickinson and Co. Braun Melsungen AG, Terumo Medical Corporation, Baxter International, Inc., Retractable Technologies, Inc., Smiths Group Plc, Medtronic Plc (Covidien), Unilife Corporation, and Revolutions Medical Corporation are some of the key players operating in the market. The high unmet demands in various emerging countries and the shift in the healthcare systems towards the adoption of safe injection practices provide huge scope for market expansion, which is expected to drive the usage of smart syringes over the forecast period.