The global sodium nitrite market size was valued at USD 385.2 million in 2021 and is anticipated to expand at a compound annual growth rate (CAGR) of 4.3% from 2022 to 2030. The demand for the product is anticipated to be driven by its increasing usage in meat curing applications. Additionally, the growth is also fueled by the growing demand for processed meat products including sausages, seafood, bacon, and ham. The product finds its application in several industries including pharmaceuticals, food and beverage, and textiles. It is employed as a preservative, particularly in the meat processing sector, because it serves as a color fixative and inhibits the growth of dangerous bacteria, making the meat safe to eat. The utilization of sodium nitrite has grown over the years as the pharmaceutical industry is involved in research and development. Its most recent application has been in the treatment of coronavirus-induced lung damage. 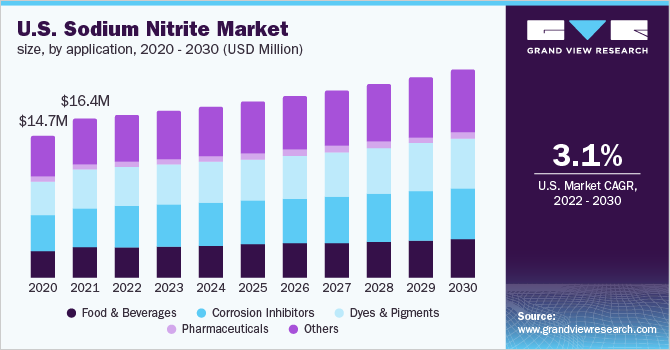 Sodium nitrite is used as a starting material in the production of a variety of compounds, including saccharines. It also acts as an antioxidant and antiozonant used in the rubber industry. The product is available in several grades such as food grade, technical grade, anti-caking technical grade, and others.

Raw materials used in the production of the product include nitrogen oxides and sodium carbonate (Naâ‚‚COâ‚ƒ) or sodium hydroxide (NaOH). Naâ‚‚COâ‚ƒ is a highly versatile substance and a co-product of chlorine production. It is very corrosive and generally used as a 50% solution or solid. NaOH is a disodium salt of carbonic acid. It is also known as soda ash or washing soda.

The sodium nitrite market is fragmented with the majority of the manufacturers and major players located in the Asia Pacific. The COVID-19 pandemic had a positive impact on the demand for the product as research and development suggested its innovative usage in healing the lung injuries caused by the coronavirus. This has boosted the use of the product in the pharmaceutical industry, consequently driving the market for sodium nitrite.

The food and beverages segment dominated the market for sodium nitrite and accounted for the highest revenue share of 24.0% in 2021. The growth is attributed to the increased usage of food additives in the poultry and meat industries. In the meat industry, the product also acts as an antimicrobial apart from a pigment inhibitor thereby restricting the growth of foodborne pathogens. Furthermore, sodium nitrite is a typical preservative found in processed meats. It is added to meat during the curing process to keep the meat fresh and away from bacteria. Sodium nitrite can eliminate germs from the meat that develop in the presence of moisture dehydrating bacteria.

The Asia Pacific dominated the market for sodium nitrite and accounted for a revenue share of 74.3% in 2021. The segment is predicted to witness the highest CAGR of 4.7% over the predicted years. The growth is attributed to the rising demand for food-grade sodium nitrite, notably in countries like India, China, and Japan. China is the world's largest food and beverage consumer market. The food and beverage sector is predicted to be driven by population growth and increased per capita disposable income. The eating habits of Chinese consumers have shifted as a result of their fast-paced lifestyles. They are inclined towards packaged foods rather than creating their meals. 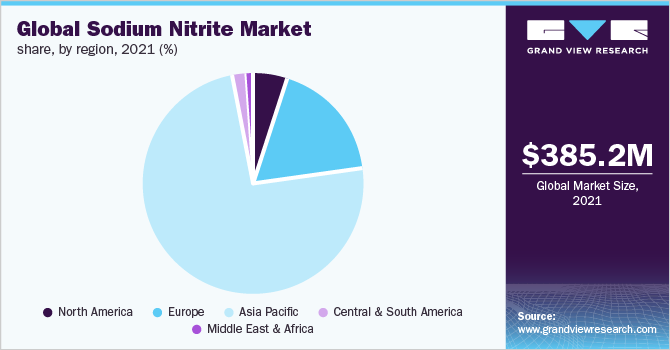 According to IBEF November 2021 report, India is the largest generic drug provider across the globe. India accounts for 50% of the global supplies for various drugs. The manufacturing of the COVID 19 vaccine has placed India in the most important position in the pharmaceutical sector. India is the home of many top pharma companies. With the continued advancement in manufacturing, medicines are expected to boost the pharmaceutical market in India. This is likely to have a positive influence on the market demand in the coming years.

Europe accounted for the second-largest market share of over 17.0% in terms of revenue in 2021. Numerous regulations are confining the usage of chemically derived products in food and beverages, especially in the North America and Europe regions. Regulations have been established by government bodies owing to associated health concerns. This is likely to further spur the demand for natural sources of sodium nitrite such as lettuce, celery, and other vegetables in Europe and North America over the forecast period.

The industry is highly fragmented with the presence of a large number of manufacturers. Multinational corporations in the market have established a global supply chain through in-house supply channels or third-party distributors. For instance, companies such as BASF SE have appointed third-party distributors to supply their products in the market.

In the Asia Pacific region, China is the major producer of the product with the presence of large manufacturers across the country. The market for sodium nitrite is expected to display considerable competition among the present players to sustain in the market. Some of the prominent players in the sodium nitrite market include:

This report forecasts revenue growth at global, regional, and country levels and provides an analysis of the latest industry trends in each of the sub-segments from 2017 to 2030. For the purpose of this study, Grand View Research has segmented the global sodium nitrite market report on the basis of application and region:

Which segment accounted for the largest sodium nitrite market share?

b. The food & beverages dominated the sodium nitrite market with a share of 23.95% in 2021. This high share is attributable to rising demand for food preservatives in the food processing industry.

How big is the sodium nitrite market?

What is the sodium nitrite market growth?

Who are the key players in sodium nitrite market?

What are the factors driving the sodium nitrite market?

b. The demand for sodium nitrite is anticipated to be driven by its utilization in meat curing applications.