The global sperm bank market size was estimated at USD 4.33 billion in 2018 and is projected to expand at a CAGR of 3.3% over the forecast period. Innovations in cryopreservation techniques, rising awareness, emergence of fertility tourism, and increasing access to infertility treatment are the key factors driving the growth. Increase in risk of miscarriages is also among few key factors boosting the demand. For instance, according to an article published by Tommy’s, an organization funding research in the area of stillbirths, premature births, and miscarriage in the U.K.; around 650 babies were miscarried per day in 2017.

Rising prevalence of obesity across the globe is also one of the key drivers for the market. Obesity is one of the known risk factors for low sperm count in men and infertility among women. Men and women with fertility issues opt for artificial insemination techniques. Thus, rising risk of infertility due to obesity, is expected to boost the demand for fertility treatments, such as In vitro Fertilization (IVF), thereby driving the market growth. 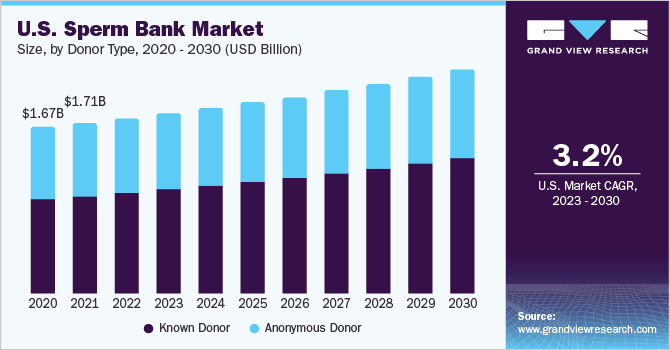 Rising concerns of male infertility due to abnormal and inadequate sperm volume and ejaculatory issues is projected to further drive the demand for sperm bank services. According to the American Association of Pregnancy, male infertility accounts for 30% of the infertility cases, which is around one-fifth of all infertility cases. Apart from genetic problems, male infertility is also caused due to illicit drugs, exposure to toxic substances, frequent alcohol consumption, and smoking. Thus, growing prevalence of male and female infertility worldwide is propelling the adoption of infertility services, such as donor insemination and IVF procedures, thereby boosting the market growth.

Rise in funding and supportive government initiatives across various countries is anticipated to boost adoption of fertility treatments, thereby driving the demand for sperm banks. The Singapore government offers around 75% co-funding for various Assisted Reproductive Technology (ART) procedures, such as IVF, Gamete Intrafallopian Transfer (GIFT), and Intracytoplasmic Sperm Injection (ICSI). In December 2015, the Ontario government announced a USD 50 million fertility program that funds one cycle of IVF and unlimited artificial insemination and intra-uterine insemination treatments. The National Health Service (NHS) also funds the treatment for infertility across the U.K.

Moreover, the market is witnessing lucrative growth opportunities owing to the growing acceptance of single-parent or same-sex families in many societies. Growing acceptance of the Lesbian, Gay, Bisexual, and Transgender (LGBT) community is one of the factors driving sperm donations across various countries. In June 2018, IVF treatment for single women and lesbian couples was made accessible in Malta, after Marie Louise Coleiro Preca, Maltese President signed Embryo Protection (Amendment).

In 2018, known donor segment held the largest market share of 56.1% in terms of revenue and is projected to expand at a lucrative CAGR 4.3% over the forecast period. Changing legal landscape in many countries mandating the right to the offspring to know their biological parent is a key factor for the highest revenue share. Austria, Switzerland, New Zealand, Sweden, U.K., and Australia are the examples of such countries with stringent laws against donor anonymity.

Anonymous donors do not disclose their identity in any official records however, in some countries it is disclosed to the recipient, by a confidentiality contract between the donor and recipient. The process of using anonymous donor is less complex as compared to that of known donor. However, a growing number of countries adopting the policy of disclosing the biological identity of the offspring is one of the factors that can negatively impact the segment growth.

Sperm storage segment is projected to register a lucrative CAGR of 4.2% over the forecast period, attributed to several factors such as innovations in cryopreservation techniques, increasing prevalence of infertility, and demand for IVF procedures. Sperm storage is beneficial for storing fertility in case of medical treatments, surgery, exposure to toxic environment, or high risk occupations such as military.

In 2018, in vitro fertilization segment held the largest revenue share of 96.5% and is projected to register a CAGR of 3.3% during the forecast period. Growing awareness regarding the benefits of IVF procedures over insemination procedures is one of the crucial factors boosting the sperm bank market. High cost of the procedure is also one of the key factors driving growth.

Increased prevalence of infertility among male population and high maternal age in countries such as Japan are few other factors driving the demand for IVF. Abolishment of China’s one-child policy and increasing incidence of Polycystic Ovary Syndrome (PCOS) are few other market drivers. Rise in access to IVF due to supportive reimbursement framework or funding also contribute to creating favorable growth opportunities. 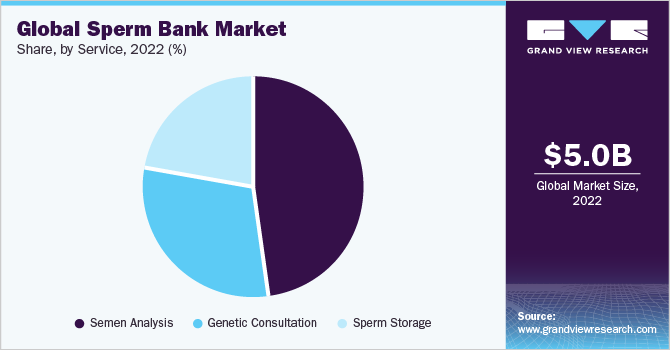 North America led with a market share of 34% in terms of revenue in 2018. This is majorly attributed to growing prevalence of infertility among the American population. For instance, according to the U.S. Department of Health and Human Services statistics updated in 2017, around 6.1 million women between the age of 15 to 44 face difficulty in getting pregnant or staying pregnant.

Europe held the second largest revenue share in 2018, attributed to the factors such as lower treatment cost compared to U.S. and Canada and rise in the number of IVF centers. Emergence of fertility tourism is also driving the regional demand.

Asia pacific market is expected to witness a lucrative CAGR of 5.0% over the forecast period. Growing demand for ART and low cost treatment are some of the factors that are expected drive the regional growth. Furthermore, a supportive legislative framework is another factor boosting the market.

This report forecasts revenue growth at global, regional, and country levels and provides an analysis of latest industry trends in each of the sub-segments from 2014 to 2025. For the purpose of this study, Grand View Research, Inc. has segmented the global sperm bank market report on the basis of donor type, services type, end-use, and region: