The global spiced rum market size was valued at USD 6.69 billion in 2019 and is anticipated to witness significant growth in the years to come. The market growth is majorly attributed to shifting consumer preference for premium alcoholic drinks. 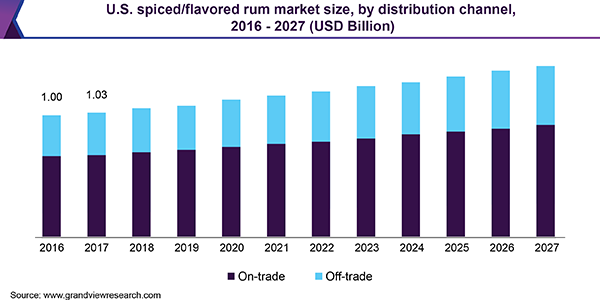 Shifting trend towards consuming a low quantity of alcohol with better quality has been boosting the demand for flavored rum, especially among the millennials. Furthermore, the expansion of cocktail culture among millennials at the global level is expected to widen the growth opportunity for flavored rum in the upcoming years.

The cocktail revolution has been appealing to a large number of drinkers who are interested in both traditional and exotic flavors. This trend has raised the sales of spiced spirits in bars, pubs, and restaurants. Furthermore, the cocktail enthusiasts have been posting appealing photos on Instagram that has been influencing a large group of followers. For instance, a vast number of “drinkstagrammers” are also encouraging consumers to try spiced drinks through social websites. This trend is expected to expand the scope of spiced rum over the next few years.

Though the traditional fruit flavors accounted for a major proportion of the overall sales in 2019, the industry has immense potential in terms of innovation. In addition, millennial consumers are seeking to purchase drinks with ordinary flavors. Therefore, alcoholic beverage manufacturers have been launching new flavors in order to gain a competitive advantage over other players. For instance, in August 2018, Diageo’s brand, Captain Morgan, introduced a new flavor, Apple Smash, which blends green-apple flavor with Caribbean rum. Later, in March 2020, Captain Morgan introduced its Captain Morgan Tiki. This tropical edition is fortified with ingredients, including mango and pineapple, which are considered ideal for summer.

Over the past few years, premium rum with innovative flavors has become an alternative for both the spirit consumers having refined tastes and keen to explore new products. On the other hand, the strong foothold of a wide range of non-alcoholic beverages through brick and mortar and online channels is expected to pose a threat to the market growth. Furthermore, growth of other spirits such as scotch and whiskey can impact the growth of the market for spiced rum.

The on-trade segment led the spiced rum market in 2019 and held over 60% share of the global revenue. Over the past few years, spirits sales have significantly increased in the on-trade segment owing to the augmented number of consumers drinking at bars, pubs, and restaurants.

The off-trade distribution channel is expected to witness the fastest growth over the forecast period. According to the Wine and Spirit Trade Association, in 2019, more than 10 million consumers have bought spiced rum from specialty stores and supermarkets in the U.K. Expansion of e-commerce has also widened the growth opportunity for spiced rum in the off-trade segment. The in-store pickup option and on-demand delivery services have been pushing the online sales of spiced rum among the consumers. As a result, liquor store chains are expanding their online distribution capabilities.

The fruit-based flavored rum dominated the market with more than 55% share of the total revenue in 2019. Consumers have shown remarkable interest in the citrus fruits blended products. Among the citrus fruits, lime, pineapple, and orange are the key sub-categories in the market. Furthermore, coconut is another popular choice among the consumers owing to its health benefits. Considering the growing demand for the fruit-flavored drinks, manufacturers of flavored rum have expanded their fruit product line. For instance, over the past few years, Bacardi has extended its portfolio by incorporating several citruses, tropical, and exotic fruits, such as lemon, grapefruit, tangerine, orange, coconut, pineapple, banana, mango, dragon berry, and raspberry. 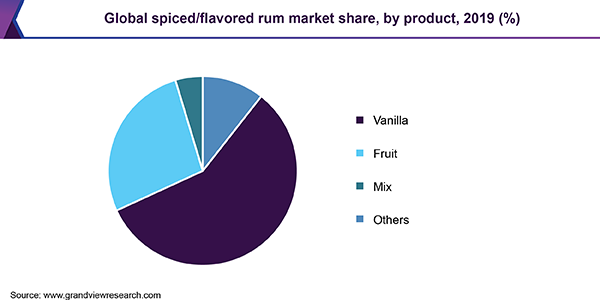 The mixed spiced rum is expected to witness the fastest growth over the forecast period. This segment includes a combination of different spices and spices blended with fruits. Spices including cinnamon, clove, and ginger blend very well with flavors, such as vanilla and fruits, and provide a unique taste to the drink. Companies including Captain Morgan, Bacardi, and Altitude Spirits have introduced mix-flavored spirits in their products. For instance, in March 2019, Bacardi launched its Bacardi Spiced rum in U.K. to cater to the growing demand at the domestic level. This spirit is a combination of spices and natural flavors blended with gold rum that offers a bold, smooth, and sweet taste.

Asia Pacific dominated the market for spiced rum in 2019 with more than 45% share of the global revenue due to the large consumer base in countries, such as China, India, South Korea, Japan, Philippines, and Australia. According to the British Chamber of Commerce in Korea (BCCK), the sales of gin and rum have been significantly growing in South Korea, especially in Gangnam and Itaewon areas. This trend is expected to compel the industry participants to launch spiced rum in these countries.

Europe is expected to witness the fastest growth over the forecast period. Consumers in the region are increasingly exploring different types of rum, including spice and fruits flavored. As per the Wine and Spirit Trade Association, in 2019, the sales of the product in off-trade have increased by 6% in the U.K. as compared to 2018. Similarly, consumers in Germany are seeking for spiced rum. Sweet flavors have gained significant popularity among German consumers. Growing trend of exploring flavored drinks will create growth opportunities for spiced rum in Europe in the upcoming years.

The companies have been investing in the market in response to the growing demand for spiced rum. For instance, in April 2018, Hotaling & Co., distiller, and importer of premium craft spirits, has invested in Denizen Rum. This investment helped the company to enhance its product portfolio, distribution channel, and marketing.

This report forecasts revenue growth at the global, regional, and country levels and provides an analysis on the latest industry trends and opportunities in each of the sub-segments from 2016 to 2027. For the purpose of this study, Grand View Research has segmented the global spiced rum market report based on product, distribution channel, and region: