The global spinal muscular atrophy treatment market size was valued at USD 883.7 million in 2017 and is anticipated to expand at a CAGR of 12.9% over the forecast period. Increasing awareness regarding Spinal Muscular Atrophy (SMA) and a growing number of initiatives to improve treatment options for rare diseases are among the key factors augmenting market development. For example, the enactment of the Orphan Drug Act, 1983 in the U.S., and a similar act for orphan medicinal products in the EU has increased the importance of research activities for the management of rare diseases.

In 2017, the U.S. FDA granted an orphan drug license to RG7916, a joint development program by Roche, SMA Foundation, and PTC Therapeutics for the treatment of SMA. Similarly, the Orphan Drug Designation was also granted to Cytokinetics’ CK-2127107 by U.S. FDA in May 2017. This is expected to accelerate the number of clinical researches in this field, thereby propelling market growth. 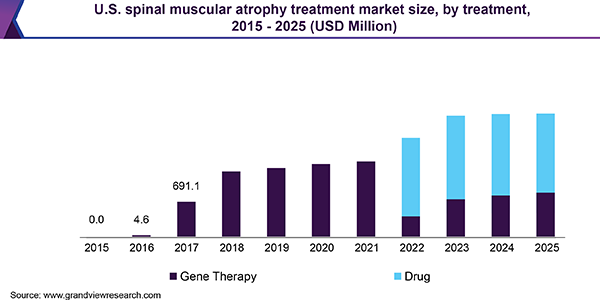 Moreover, initiatives undertaken by various public, as well as nonprofit, organizations for creating awareness regarding SMA is another factor driving the market. In January 2018, the National Institute for Health and Care Excellence (NICE) invited Biogen to submit a single technology appraisal for Spinraza to enable NHS funding. NICE and NHS, U.K. are developing a managed access agreement for a long-term reimbursement plan for Biogen’s Spinraza.

In addition, organizations, such as Cure SMA, SMA Foundation, and Muscular Dystrophy Association, are creating awareness about this disorder. Major companies are heavily investing in R & D for the development of a curative treatment. All these factors are also contributing to market growth. Research institutes are also focusing on the development of treatment therapy for this disorder.

Some of the products in the clinical pipeline are AVXS-101, a gene therapy under clinical research developed by AveXis, Inc., and Roche Holding AG’s Olesoxime, an investigational therapy being developed for promoting the survivor of motor neurons. Several other products in the clinical pipeline are Ck-2127107 (Cytokinetics), Branaplam (Novartis), VY-SMN101 (Voyager Therapeutics), and Bbrm02 (BioBlast Pharma).

In 2017, drugs emerged as the largest treatment segment with a revenue share of 100% since Spinraza is the only drug approved for the treatment of SMA to date. Developed by Biogen in collaboration with Ionis Pharmaceuticals, this drug was approved by the U.S. FDA in December 2016. It generated a revenue of USD 4.6 million in 2016. Thus, the drug segment is expected to lead the global SMA treatment market until 2020. However, with the commercialization of other treatment therapies.

The intrathecal route led the market in terms of the revenue share in 2017. Spinraza is administered intrathecally. Since the launch of new products is not expected until 2021, this segment is expected to continue its dominance. RG 7916 and RG 6083 (Olesoxime) are among the few potential therapies expected to be commercialized post-2020. These treatments can be administered orally, which makes the oral route of administration an important route in terms of clinical studies.

In 2017, type 1 SMA emerged as the largest segment of the spinal muscular atrophy treatment market. This segment is expected to register the fastest CAGR over the forecast period as it is one of the most common forms. Increasing incidences of this type and focus of companies on developing drugs for SMA treatment are the key factors contributing to the segment’s largest revenue share. AVXS-101 is an investigational gene therapy developed by AveXis, Inc. This therapy is being tested in a clinical trial STR1VE for evaluating the safety and efficacy of a one-time infusion of AVXS-101 in SMA 1 patients. 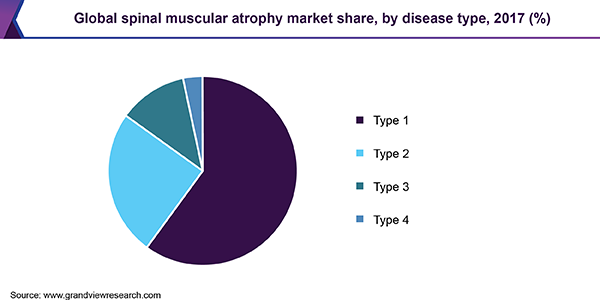 Another example of investigational therapy focused on Type 1 SMA is Novartis AG’s LMI070. Thus, the increasing number of clinical studies focused on type 1 disease is the major factor boosting the segment growth. Spinraza is the available treatment for all types of SMA. AveXis, Inc. has undertaken a clinical trial STRONG to evaluate the safety, efficacy, and optimal dosing of AVXS-101 in type 2 SMA patients among two distinct age groups. Thus, clinical research for extending indications to other SMA types is anticipated to boost the market.

North America led the market in 2017. This growth was due to the maximum revenue generated by the U.S. market. Since Spinraza was approved in the country in December 2016. Some of the other factors that contributed to the largest revenue share are the presence of Biogen Inc. in the U.S., high disposable income, and the rise in the adoption of Spinraza. The market will expand further on account of a number of initiatives undertaken by private organizations to create awareness and support R & D for the treatment of this disorder.

For example, CureSMA is an organization dedicated to funding and supporting comprehensive research to boost the treatment and care for SMA patients and their families. Asia Pacific is expected to register the fastest CAGR over the forecast period. This growth is attributed to the rapidly developing health infrastructure in countries, such as China and India, and an increasing number of initiatives to improve access. Rise in consumer disposable income is also expected to positively influence market growth.

The market is led by Biogen, Inc. Biogen’s Spinraza is the only approved commercialized treatment for this disorder. Thus, competitive rivalry for this market is extremely low. However, this trend will change with the commercialization of several products. For instance, the products of Roche and Avexis, Inc. are under phase 3 clinical study. These products are likely to be commercialized in the coming years and this is anticipated to increase competition.

This report forecasts revenue and volume growth at global, regional, and country levels and provides an analysis of the latest industry trends in each of the sub-segments from 2015 to 2025. For the purpose of this study, Grand View Research has segmented the global spinal muscular atrophy treatment market report on the basis of disease type, treatment, route of administration, and region: