The global sports nutrition market size was valued at USD 11.64 billion in 2017. It is expected to register a 9.7% CAGR during the forecast period. Surging demand for various kinds of protein bars, energy drinks, and dietary supplements among bodybuilders and athletes is one of the key factors stoking the growth of the market. Rising disposable income and rapid pace of urbanization have also been propelling the market.

According to a research paper, “Perception of Athletes about Diet and Its Role in Maintenance of Sports Performance”, published in the Journal of Nutrition & Food Sciences in 2017, carbohydrates, proteins, fats, vitamins, minerals, and water are the essential elements to consume in appropriate amounts for athletic participation. The study was conducted among 206 players from different sports clubs. The study highlighted the fact that bodybuilders and athletes are increasingly realizing the importance of nutrition for the overall improvement in their performance. 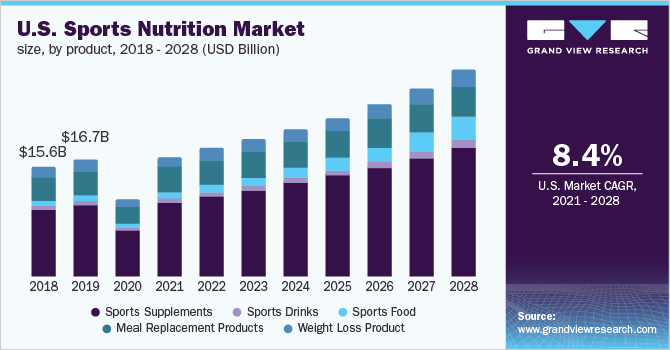 Increasing number of health & fitness centers has been positively influencing the growth of the market as these centers are involved in endorsement of sports and fitness nutrition products among their respective consumers. According to the International Health Racquet and Sportsclub Association in 2016, there were nearly 38,477 health clubs in the U.S. In addition, the total U.S. health club membership increased from 50.2 million in 2012 to 60.9 million in 2017. The data signifies growth in awareness regarding physical fitness among the population, which has been fueling the demand for these products.

Various research studies that emphasizes on application of variety of nutritional constituents for different types of sport performances are being carried out, which in turn are providing an upthrust to the market. For instance, a research study published in the journal Nutrients focused on effect of 10 week beta supplementation on competition and training performance of elite swimmers. Moreover, recent developments in products with natural ingredients, plant based proteins, and dairy products are estimated to drive the market.

Expansion of consumer base, including both core (bodybuilders & athletes) as well as casual users (recreational athletes), has broadened the category in which sports nutrition is offered to consumers. This in turn has worked in favor of the market. However, complex regulatory scenario and threat of sale of counterfeit products can inhibit the growth of the market during the forecast period. For instance, several illegal ingredients that have been banned by World Anti-Doping Agency (WADA) have been found in many products around the globe.

In 2017, sports drinks was the dominant segment in the market and it accounted for approximately 47.0% of the overall revenue. Availability of a wide range of sports drinks coupled with growing consumer awareness related to types of ingredients and flavors is one of the primary driver for the growth of the segment. For instance, Danone’s Mizone, a leading vitamin brand in China, offers variety of flavors including lime, blackcurrant, and raspberry. Another case in point is Gatorade Zero Thirst Quencher, which is a type of sports drink marketed by Stokely-Van Camp, Inc. It is available in various flavors including orange, lemon-lime, and glacier cherry.

Presence of a large number of competitive players is translating into greater availability of these drinks in the market. Gatorade and All Sports of PepsiCo, 100PLUS of Fraser and Neave Limited, and Aquarius of The Coca-Cola Company are some of the leading brands and their manufacturers in the market.

In addition, growing availability of products ensuring personalized care is anticipated to bolster the growth of the market during the forecast period. For instance, in 2016, Gatorade launched its Gx personalized hydration system that features a digital sweat patch that measures electrolyte loss and a smart cap on the bottle that monitors fluid intake. The formulas can be personalized by sodium and carbohydrate levels and flavors to meet each player’s preferences.

The sports supplements segment is projected to expand at a lucrative CAGR of 10.5% over the forecast period. The growth of the segment can be attributed to increasing health consciousness among people, rising sedentary diseases, and growing trend of self-diagnosis of vitamin and mineral deficiencies. In addition, various establishments including gyms and health & wellness centers are involved in endorsements of such supplements, which is subsequently leading to increased demand for sports nutritional products in the market.

Bricks and mortar was the most prominent distribution channel in the sports nutrition market in 2017, with a value of USD 9.44 billion. Rising number of specialty stores including Walmart, GNC, and Vitamin Shoppe is playing a vital role in the dominance of the segment owing to better brand reputation and wider distribution of these stores. In case of this industry, consumer trust plays an important role in selection of distribution channel as threat of purchasing counterfeit or substituted product prevails in minds of consumers. In such cases, bricks and mortar channels are more trusted by consumers in comparison to online channels. 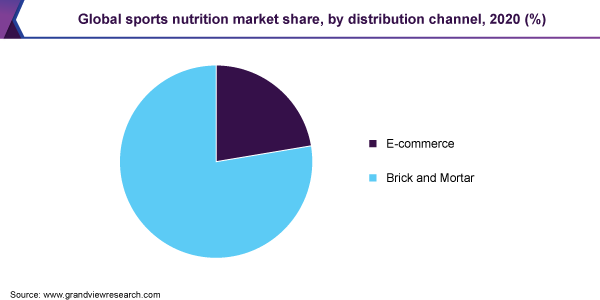 Specialty stores are introducing newer ways to attract customers, which in turn is contributing to the growth of the segment. These stores are focusing on holistic solutions, which include consultation, curation, and services. For instance, in 2015, Vitamin Shoppe implemented an initiative that included new hiring, training sessions, loyalty programs, and stores equipped with Wi-Fi and tablets. This initiative was for improving the overall retail experience. Marketing practices of these stores are stressing towards pushing quality ingredients and certifications including ELISA testing, gluten-free, or third party banned substance testing certificates.

E-commerce channel is poised to post a higher CAGR of 12.4% over the forecast period. Rising number of self-directed consumers is likely to boost the adoption of online channels for purchase of these products in the coming years. Moreover, large discounts offered by online players on several supplements can attract consumers towards online channels.

In 2017, North America was the leading revenue contributor in the market, accounting for approximately 35.0% of the global market. Growing health awareness, increasing number of gyms and health & fitness centers, and changing consumer preferences for nutritional products are some of the primary growth stimulants for the market in the region.

Presence of both small and large industry players has been bolstering product availability and enhancing penetration of these products in this region. Major manufactures operating in this region include Nestlé S.A; Abbott Nutrition Inc.; GNC Corporation; Fit Foods Ltd.; The Coca-Cola Company; and Simpson Labs.

Rising government initiatives towards health promotion in the U.S. are expected to foster the growth of the region. For instance, President Council on Sports, Fitness & Nutrition (PCSFN) is one such council that implements programs and initiatives that aim to increase sports participation among the people of the country. Moreover, various ongoing researches in this field are also estimated to spur the growth of the market in North America.

Asia Pacific is anticipated to be the most promising destination for global players and it is slated to experience a CAGR of 13.0% during the forecast period. Rising disposable income, growing health & fitness awareness, and increasing number of global distributers in this region have been supplementing the growth of the regional market. Recent developments in contract manufacturing, particularly in countries including China, India and the Philippines, for bulk production of vitamins and minerals are projected to support the growth of the market in APAC.

Collaborations with other industry participants, investments in R&D, and product differentiation are among the key strategies adopted by market players for gaining competitive edge. For instance, in 2018, Freedom Food Group of Australia entered into a three year distribution agreement with protein brand, Crankt. This collaboration helped Freedom Food Group to expand its sports and nutrition brand in Australia.

Similarly, Glanbia Plc. Ireland acquired thickThin protein bars in 2015. The market is dominated by two types of consumers, including recreational athletes & lifestyle consumers, who are more inclined towards flavor and nutrition while professional athletes focus on novel ingredients. Bargaining power of buyers is high as product switching cost is relatively low, therefore consumer retention is quite challenging in this scenario.

This report forecasts revenue growth at global, regional, and country levels and provides an analysis of industry trends in each of the sub segments from 2014 to 2025. For the purpose of this study, Grand View Research, Inc. has segmented global sports nutrition market report on the basis of product, distribution channel, and region: