The global sports protective equipment market size was valued at around USD 9.0 billion in 2018 and is expected to expand at a healthy CAGR over the forecast period. The market is driven by increasing participation of schools and colleges in the sports activities across the world. The surge in participation is attributed to increasing campaigns by sports governing bodies and professional leagues, such as the Indian Premier League (IPL), Western Hockey League (WHL), National Football League (NFL), and Major League Baseball (MLB). Moreover, growing awareness regarding health and fitness has led to the rise in participation in physical activities and sports, thereby fueling the demand for protective gear over the forecast period.

An increase in various national and international events worldwide has raised awareness about sports injuries, which has led to a rise in the adoption of protective gear. Various protective gear manufacturers are sponsoring events at national and international levels to gain a competitive advantage as well as to expand their consumer base. For instance, companies such as Adidas was the official sponsor of the FIFA World Cup. Nike and Under Armour are other reputed companies that we're the official suppliers in Rio, Brazil, and the 2014 Winter Olympics, respectively. An increase in the number of sports events will fuel the demand for sports protective equipment. 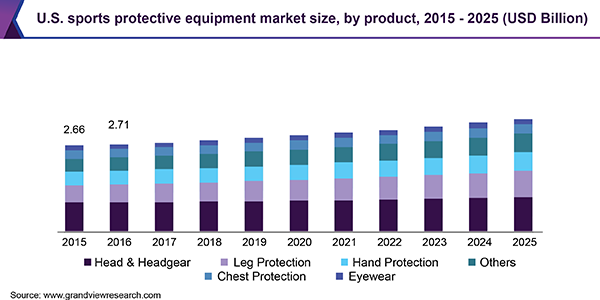 Various initiatives undertaken by government bodies and key manufacturers across the globe are likely to increase participation in physical activities, including indoor and outdoor games. For instance, The Sport for All initiative undertaken by the President's Council on Sports, Fitness & Nutrition (PCSFN) aims to educate all Americans regarding the benefits associated with sports participation. Moreover, leading manufacturers are focusing on the development of innovative products to meet consumer requirements.

Protective gear manufacturers are using various raw materials such as Kevlar, innovative plastic, and carbon fiber to produce advanced protective gear. Also, various manufacturers are focusing on providing custom products to expand their customer base and increase market share. Furthermore, innovative and advanced products are increasingly replacing old products as they are lightweight and durable. This, in turn, is likely to provide growth opportunities for the manufacturers in the coming years.

Head and headgear was the largest product segment in 2018, accounting for 31.2% share of the overall revenue. An increasing number of professional leagues such as the IPL, American Football League, and World Cycling League is a key factor driving the demand for helmets and head protection gears over the forecast period. The growing popularity of American football, cycling, and baseball will further fuel the demand for head protection equipment. Rising participation in sports in various countries such as India, Africa, and China is expected to provide growth opportunities for the segment in the foreseeable future.

Leg protection gears are expected to expand at the highest CAGR of 5.6% from 2019 to 2025. The growing popularity of soccer across the globe will have a positive impact on segment growth. For instance, according to the study, soccer or football is the most popular sport in the world. It is estimated that more than half of the world's population consider themselves to be association football fans. The sport enjoys an estimated 4.0 billion people following, and a global sphere of influence.

The offline segment held the largest share of more than 90.0% in 2018. An increasing number of sports equipment outlets in India and China is expected to have a positive impact on the growth of the market. For instance, Adidas AG, the German sportswear manufacturer, will open 3,000 new stores in China by 2020, owing to rising wealth and health awareness in the country. The key aim is to expand its retail network across the globe.

Furthermore, an increase in the number of outlets will help companies to bridge the gap between consumers and companies, which will have a positive impact on the growth of the market. The online segment is expected to expand at the fastest CAGR of 7.5% over the forecast period. Online sales channel has witnessed significant growth in the last few years due to increasing internet penetration in various countries. Moreover, online retailers including Amazon, Walmart, and DICK’S Sporting Goods are fueling the segment growth.

North America was the largest regional market in 2018, accounting for 40.0% share of the overall revenue. The growing popularity of American football and ice hockey across the globe is a key factor driving the sports protective equipment market in the region. The U.S. held a major share of the North America market in 2018. These sports bring people together, regardless of their culture, race, and religion, and are considered to be an integral part of American culture. 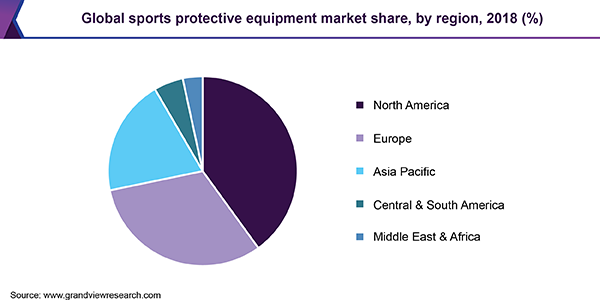 As per the studies, in 2016, 33.0% of the participants said that American football was their favorite sport, followed by baseball. The popularity of American football and soccer is growing in the U.S. and Mexico. Owners of the National Football League (NFL) are organizing events at different places in U.S. and Mexico to raise awareness regarding sports, which is expected to provide growth opportunities for the sports protective equipment market shortly.

The Middle East and Africa are anticipated to witness significant growth in the coming years. The growing popularity, coupled with increasing awareness among individuals, is expected to fuel the demand for protective gear. Celebrity endorsements such as Usain Bolt for Nike will have a positive impact on the regional market growth.

The rising spending power of the middle class and upper-middle-class population has resulted in augmented market demand for sports protective equipment and increased competition among various players. Companies operating in the market are focusing on innovative and durable product launches to expand their customer base. The global market is marked by the presence of various regional and multinational companies. Some of the key players in the market are Nike, Inc.; Adidas Group; MIZUNO Corporation; Shock Doctor, Inc.; BRG Sports; Amer Sports; Xenith, LLC; WARRIOR SPORTS; FRANKLIN SPORTS INC.; and Alpinestars S.p.A.

This report forecasts revenue growth at the global, regional, and country levels and provides an analysis of the latest industry trends and opportunities in each of the sub-segments from 2015 to 2025. For this study, Grand View Research has segmented the global sports protective equipment market report based on the product, distribution channel, and region: