Staples PP nonwoven fabrics have been gaining popularity in automotive, construction, and geotextiles industries owing to its tensile strength and durability. Growth of these industries in developing regions including Asia Pacific and Latin America are expected to have a positive impact on staples PP nonwoven market over the forecast period. The aging population mainly in Japan, Western Europe, and the U.S. have been major factors driving the demand for adult incontinence products which in turn is expected to augment the market growth over the next six years. In addition, growing awareness related to feminine hygiene is expected to further promote the production. However, stringent environmental regulations on account of increasing concerns regarding PP degradability and recyclability are expected to pose challenges to industry players. 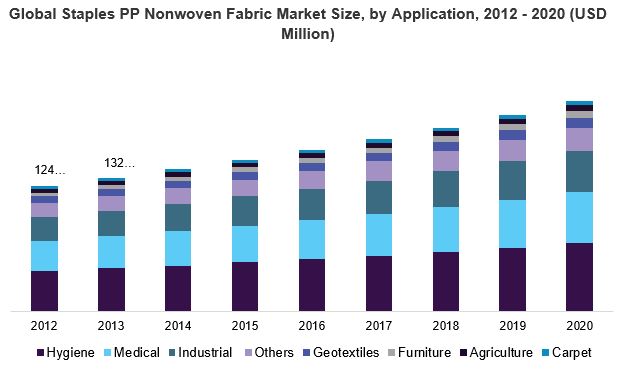 Uncertainties in crude oil reserves and fluctuating petrochemical prices have been major factors for the volatility in propylene prices which in turn are expected to affect the industry in terms of raw material supply. In order to confront these challenges, the industry has shifted its focus towards developing bio-based polypropylene which is expected to serve as a major opportunity for market participants over the next six years. 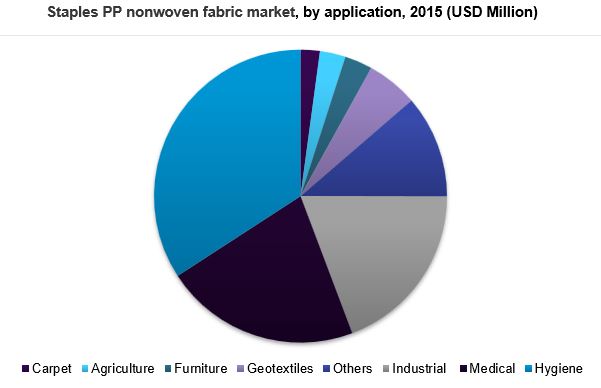 Hygiene applications include baby diapers, feminine hygiene products, adult incontinence, wipes, etc. The aging population in Japan, the U.S., Canada, the U.K., Russia, and other Western European countries are expected to drive the demand for adult incontinence products which in turn is expected to drive staples PP nonwoven demand in hygiene applications. High birth rates in North African countries, Asia Pacific, and the Middle East are expected to further drive staples PP nonwoven fabric demand in baby diapers. In addition, growing health concerns coupled with economic development in regions including Asia Pacific is expected to promote the demand for feminine hygiene products. Moreover, growing spending power and improved standard of living in North America and Europe is expected to boost the demand for wipes and tissues over the forecast period.

The global staples PP nonwoven fabric market is highly fragmented within the top few participants. Companies are involved in widespread R&D in order to achieve product innovation. The market has been witnessing M&A by large companies in order to gain higher shares. In 2014, Polymer Group acquired 71.25% of capital stock in Companhia Providência Indústria e Comércio, a Brazilian manufacturer of nonwovens. Moreover, manufacturers are shifting their focus towards expanding production capacities in Asia Pacific in order to cater to the growing demand in the region. In 2013, Polymer Group Inc. has started expanding its manufacturing facility in Nanhai, China. Large companies have been acquiring smaller companies in the quest to minimize competition and increase market share. Some of the leading companies operating across the globe include Fibertex, AVGOL, Kimberly-Clark, Fiberweb, First Quality, Toray, Mitsui, and PGI among some other companies.