The global stationery products market size to be valued at USD 128.5 billion by 2025 and is expected to grow at a compound annual growth rate (CAGR) of 5.1% during the forecast period. Growing literacy rates across the globe and an increasing number of youth inclining towards higher education are among the prominent factors for market growth. Furthermore, the rapid increase in the number of start-ups is propelling market growth. According to a report by NASSCOM, more than 1200 startups came into existence in 2018. Thus, increasing employment in these sectors is impacting market growth significantly. Government initiatives have led to an increase in the number of schools and colleges in rural as well as urban areas, which is directly impacting market growth. 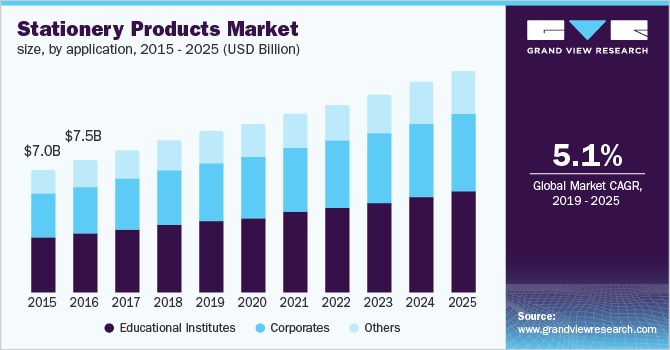 Globalization is also considered to be a significant factor for the market growth. It has led to the expansion of multinational companies in various countries, which influences the market growth in that region. Government initiatives in emerging countries such as India have welcomed various international companies. For instance, Make in India policy has led the Chinese company, Huawei to invest in the Indian market, which, in turn, resulted in the expansion of the company.

The primary driving factors for the market growth are the extensive use of stationery products by the increasing youth demographic that is inclining towards higher education, as well as a rapid increase in the number of new businesses across the globe. Additionally, the increasing government initiatives to raise literacy rates have led to a growth in the number of schools and colleges in rural and urban areas, influencing the market advancement.

The industry has been affected by digitalized schools and green schooling. The adoption of technical devices is another factor that is holding back the sales of stationery products.

The demand for paper-based products is declining in developed markets because of IT integration and industry automation. Conversely, the growing demand for printers and computer supplies such as toner cartridges and discs has created enormous opportunities for manufacturers and retailers to modify products through technological advancements. Globalization also plays a significant role in the growth of the office stationery items market because of the emergence of new establishments of multinational corporations in several countries.

On the basis of application, the market is further segmented into educational institutes and corporates. Educational institutes held the largest share of 45.3% in 2018. The presence of a large number of schools and colleges and a growing population have led to the segment growth.

Apart from digitization, the installation of smart classes is found to be costly and is not feasible for various economical institutions, thus the demand for stationery products is constantly growing in the segment. The growing trend of studying abroad is also impacting the market growth of the region, eventually fueling the overall market growth. For instance, according to the U.S. embassy report, there has been a rise of 12.0% in the number of Indian students in 2017.

The corporate sector, on the other hand, is expected to expand at a CAGR of 5.3% in the forecast period. Despite the fact that digitization is hitting the corporate sector, the paper remains the prominent stationery product, which is used in the sector.

On the basis of product, the market is segmented into paper-based, ink-based, and art-based. The paper-based segment accounted for a leading share of 30.4% in 2018 and is expected to witness significant growth in the near future. Even after digitization hitting the markets, papers are one of the most used stationery products, finding its application in printing. The introduction of various coaching centers has led to an increase in the usage of paper in the near future. Paper is used for printing question papers and other assignment sheets in the education sector. Various other usages of paper in government offices and architectures has driven the segment. 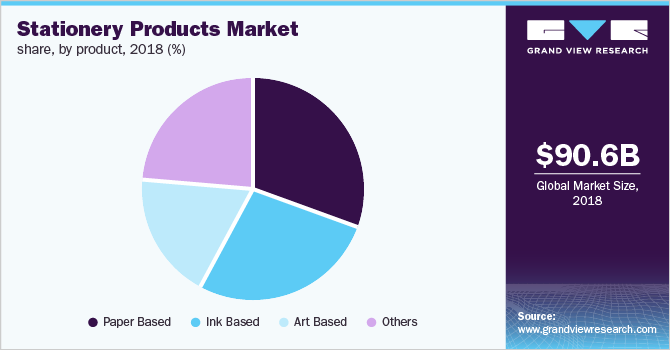 The ink-based segment is expected to register a CAGR of 5.7% during the forecast period. Increasing demand for pens among the millennials due to inclination towards higher education is impelling the market growth. Product innovation also plays an important role in fueling the  industry growth. For instance, the introduction of RGB pens that enable the user to write in any color has impacted the market growth. In order to position as an eco-friendly product, manufacturers have come up with bamboo and wooden pens.

In 2018, Asia Pacific led the market with a share of 32.0% and is anticipated to witness significant growth in the near future. In APAC, India contributes to the majority of share and is expected to register a CAGR of 6.2% over the forecast period. High usage of different types of stationery products and an increasing number of educational institutes in rural as well as urban areas are driving the regional market in the forecast period. 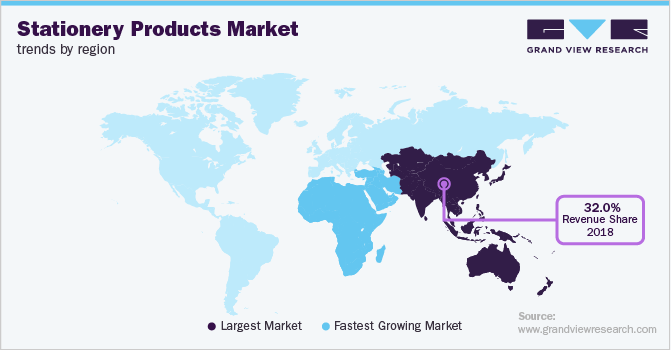 Middle East and Africa are anticipated to expand at the fastest CAGR of 6.1% in the forecast period. Increasing awareness regarding education in Middle East countries and encouraging females for higher education has resulted in the  industry growth in the region. In African regions, an increase in the number of schools due to government initiatives as well as donations made from across the globe have led to the market growth in the region.

In countries such as India, a large number of economical consumer groups still prefer to buy stationery items from local vendors of unorganized companies rather than global market leaders. These are the challenges that the market poses for the players and it differs from country to country. The advertisement also plays an important role in creating awareness about the product as well as innovation in the product. For instance, when Reynolds came up with pens that have waterproof inks, they advertised themselves accordingly.

This report forecasts revenue growth at global, regional, and country levels and provides an analysis of the latest industry trends in each of the sub-segments from 2015 to 2025. For the purpose of this study, Grand View Research has segmented the global stationery products market report on the basis of product, application, and region: 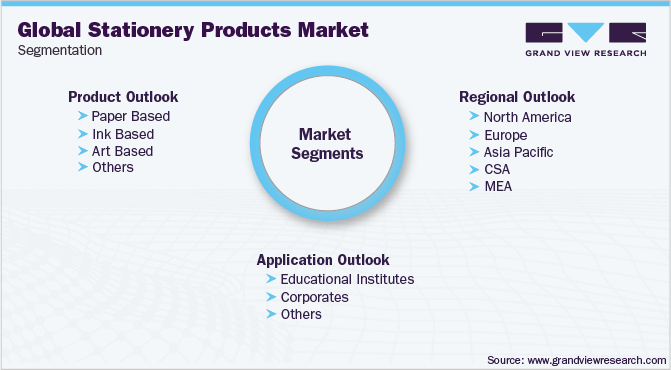