The global steel rebar market size was valued at USD 270.18 billion in 2021 and is expected to expand at a compound annual growth rate (CAGR) of 4.9% from 2022 to 2030. The market is anticipated to be driven by the rising investments in infrastructure development projects and construction activities. Government spending on propelling supporting infrastructural developments to boost economic growth is anticipated to benefit the market growth. For instance, in 2021, the Chinese government allocated USD 573 billion as special-purpose bonds (SPBs) to its local governments for rebuilding the country’s infrastructure. Of the funds raised through issuing SPBs, 50% were used for the industrial park and transport infrastructure development. 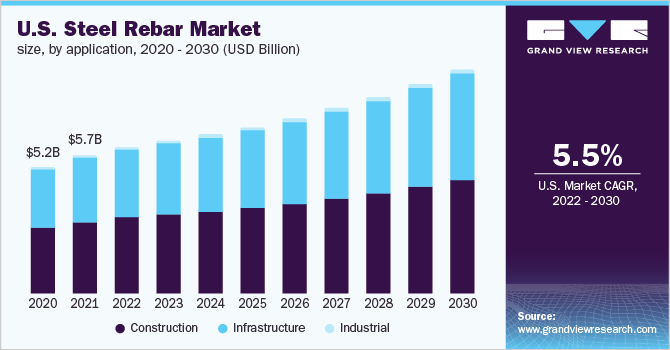 The U.S. is one of the major consumers of steel rebar and this trend is anticipated to prolong considering the rising spending on infrastructure rebuilding projects. In 2021, the U.S. government passed the Infrastructure Investment Jobs that focuses on boosting the economy and rebuilding public infrastructure by investing in various projects such as bridges, rails, roads, communication, and ports. Infrastructure revamping programs in the U.S. are expected to drive the steel rebar demand during the forecast period.

Furthermore, according to the U.S. government, major highways and 45,000 bridges are to be repaired in the country. The Act mandates the allocation of USD 110.00 billion for rebuilding the infrastructures. Moreover, the government has decided to allocate funds for the development of ports, water supply, and airports as well. These investments are projected to lift the demand for steel rebar in the U.S. across the forecast period.

Investments in manufacturing facilities are expected to further augment the market growth over the coming years. For instance, in September 2021, Ford Motor Company decided to spend USD 11.40 billion for the construction of two manufacturing facilities in Tennessee and Kentucky, U.S. The facilities are expected to produce electric F-Series trucks as well as batteries for its future electric Ford and Lincoln vehicles. The production at these plants is expected to begin in 2025.

Construction dominated the market in 2021 with a revenue share of more than 55.0% and this trend is expected to continue during the forecast period. Various investments in the construction industry are projected to augment segment growth. For instance, in April 2022, Alliance Group, a leading real estate developer, announced to an investment of USD 1.12 billion for its residential construction projects in Hyderabad, Chennai, and Bengaluru, India.

In addition, the rising need for steel rebars in the construction of production facilities is another growth driver for the market. For instance, in July 2022, Skeleton Technologies, an energy storage technology firm in Estonia, announced to an investment of USD 225.4 million for the construction of a fully automated production facility in Leipzig, Germany for manufacturing supercapacitors.

The Asia Pacific held the largest revenue share of over 60.0% in 2021. Investments in several construction activities, mainly by China and India, are projected to boost the steel rebar demand in the region across the forecast period. For instance, at the beginning of 2022, the Indian government allocated USD 1.89 billion to aid initiatives such as ‘Housing for All’ and ‘Smart Cities Mission, according to the Ministry of Commerce and Industry. 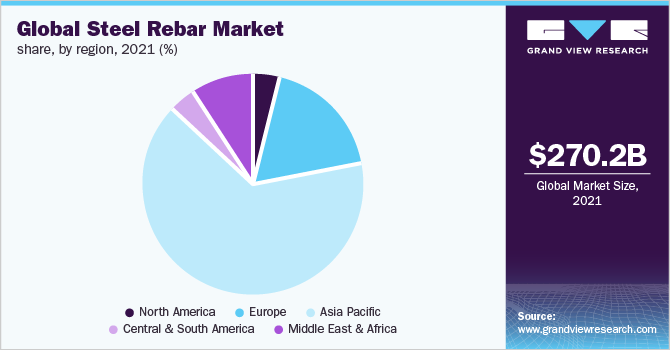 North America is projected to register a growth rate of 4.8%, in terms of revenue, from 2022 to 2030. The growth rate is expected to get influenced by the increasing flow of funds toward various infrastructure projects from the government of the U.S., Mexico, and Canada. For instance, in April 2022, the Mexican government announced the third infrastructure development fund along with private players for revamping the country’s economy. The fund is focused on the redevelopment of airports, rail lines, and ports in the country. 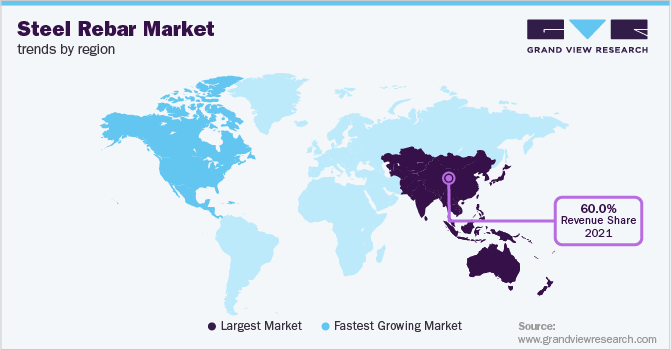 In addition, in October 2021, the German government decided to invest USD 109.32 billion in developing rail infrastructure in the country. Moreover, the government had set aside USD 342.70 billion for the development of transport infrastructure. Rising investment in railway infrastructure development projects is anticipated to augment the market growth during the forecast period.

The global market is fragmented with the presence of established as well as small-scale players across the world. The established players give tough competition to other small players by adopting various strategies such as capacity expansions, mergers & acquisitions, product innovation, and joint ventures.

For instance, in February 2022, FABco, LLC, a leading provider of concrete construction material and supplier of steel rebars, acquired Volunteer Rebar. This acquisition is expected to help the company to accelerate its growth and increase services to customers based in Tennessee, U.S. Some prominent players in the global steel rebar market include:

This report forecasts revenue and volume growth at the global, regional, and country levels and provides an analysis of the latest industry trends and opportunities in each of the sub-segments from 2017 to 2030. For this study, Grand View Research has segmented the global steel rebar market report based on application and region: 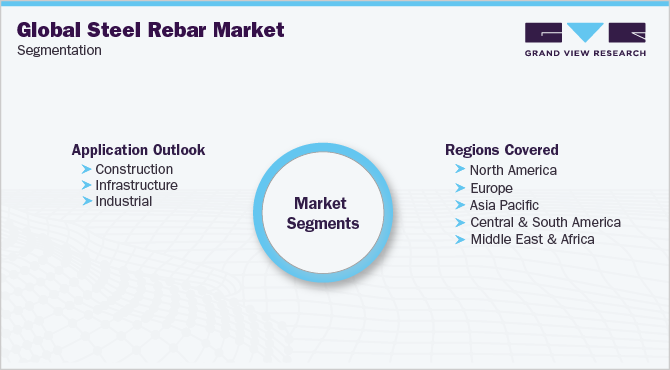 How big is the steel rebar market?

What is the steel rebar market growth?

Which segment accounted for the largest steel rebar market share?

b. Based on the application, construction accounted for the largest revenue share of more than 55.0% in 2021 of the overall market. The rising flow of funds towards non-residential & residential construction in various economies worldwide is anticipated to augment the segment growth over the forecast period.

Who are the key players in the steel rebar market?

b. Some of the key players operating in the steel rebar market include ArcelorMittal, Nucor, JSW, NLMK, NIPPON STEEL CORPORATION, Tata Steel, and POSCO, among others.

What are the factors driving the global steel rebar market?

b. Increasing construction spending in emerging economies and government funding for infrastructure development are the key driving factors of the market.