The global sterility indicators market size was valued at USD 548.0 million in 2017. It is anticipated to expand at a CAGR of 10.9% over the forecast period. Increase in R&D activities and strict government regulations are the factors anticipated to drive the market. In addition, rising demand for medicines and medical devices due to high prevalence of chronic diseases such as asthma, diabetes, arthritis and cancer is anticipated to boost market growth in near future. 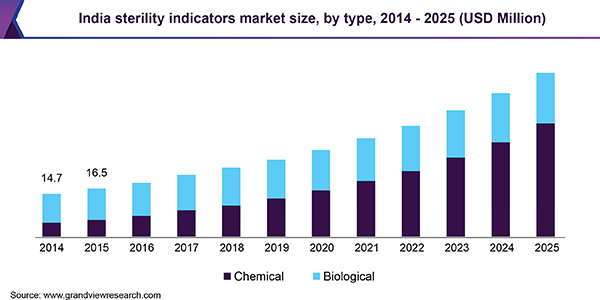 Growing efforts to reduce burden of Hospital Acquired Infections (HAIs) is one of the high impact rendering market drivers. The concept of hospital sterile processing units is being adopted in developing regions such as China, India, and Middle Eastern countries. Steep rise in the number of sterilization procedures is expected to have a direct positive impact on the market.

Introduction of advanced indicators significantly reduces the prices for their older versions. This drives their adoption in developing countries from Asia Pacific and Middle East and Africa, where cost constraint is a major factor. The cumulative effect of these activities is expected to result in increasing usage of sterility indicators, which, in turn, is fueling the market growth.

The chemical indicators segment includes Class 1 to Class 5 indicators. Class 1 and 2 indicators have significant usage in steam and EtO sterilization techniques. These segments are expected to maintain their dominance in the market throughout the forecast period owing to growing application. Class 1 indicators are sub-segmented into tapes, strips, and others. The class 1 indicators are widely used and hence hold the largest market share. The segment is expected to expand at the fastest CAGR over the forecast period.

The heat sterilization segment captured the largest market share in 2017. Heat sterilization is the most commonly used traditional method. The growth of this segment can be attributed to the benefits of this technique, such as efficacy and ease. These techniques include autoclaving, pasteurization, and fractional sterilization methods. Over the past decade, moist sterilization techniques are increasingly being adopted owing to their applications in dairy and pharmaceutical industry and R&D organizations.

The hospital segment captured the largest market share in 2017. This segment is anticipated to continue leading as sterilization procedures are repeatedly carried out in hospitals. Moreover, stringent regulatory guidelines for sterilization of class III medical devices, biologics and drugs are driving the sterility indicators market. 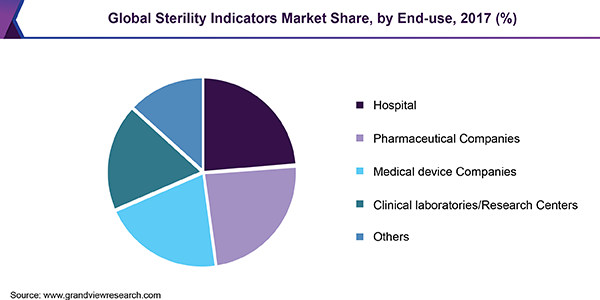 Increasing R&D and advent of complex equipment with rising intricacy of medical devices are driving the demand for effective sterilization procedures from pharmaceutical companies. Pharmaceutical and Medical devices companies perform sterility tests as part of quality control in product manufacture. Frequent product launches in the field of healthcare are anticipated to boost the market growth during the forecast period.

North America led the global market in 2017.High demand owing to frequent product launches in drug, medical devices and biologics, and reimbursement coverage are some of the factors driving the growth of this region. Constantly rising target patient population owing to aging is fueling the regional demand for medical products. High prevalence of chronic diseases coupled with high adoption of advanced treatment procedures is fueling the market growth in U.S. In addition, few of the giant players are based in the region, which is expected to help the region continue its dominance over the forecast period.

Asia Pacific, on the other hand, is expected to exhibit the fastest CAGR during the forecast period. China and India have a significant presence of local manufacturers, providing cost-effective alternatives and intensifying the competition. In addition, booming medical tourism industry in the region owing to the availability of advanced healthcare treatments at a cost-efficient rate is expected to attract the target patient population to Asia Pacific.

Most companies focus on continuous product development and offering products at competitive prices, especially in developing countries due to the stern competition from local manufacturers. For example In November 2017, Mesa Labs acquired BAG Health’s hygiene business, which consists of biological, chemical and cleaning indicators. This move is anticipated to give competitive edge to the company.

This report forecasts revenue growth at global, regional, and country levels and provides an analysis of the latest industry trends in each of the sub-segments from 2014 to 2025. For the purpose of this study, Grand View Research has segmented the global sterility indicators market report on the basis of type, technique, end user, and region: