The global structural health monitoring (SHM) market size was valued at USD 1.22 billion in 2019. A rapid expansion in the infrastructure sector is poised to drive the market. Increasing government initiatives towards SHM system standardization and public safety are also boosting market growth. Stringent regulations pertaining to sustainability of structures and declining cost of sensors are projected to provide a fillip to the market.

Structural health monitoring is a tool that enables civil engineers to reduce maintenance cost and improve safety measures of crucial architectural structures. Fundamental functions performed by SHM systems include testing and monitoring of performance and health of large machines, airframes, turbines, and structures such as buildings, bridges, dams, and stadiums. 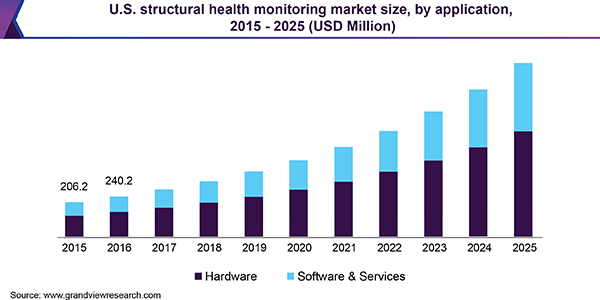 This technology is an integration of data acquisition and transmission systems, sensors, analyzing tools, and measuring amplifiers, and software. The system plays a key role in detecting damages using predictive maintenance, boosts safety of the structure, and enables automatic response, thus saving time and costs.

In developing countries, ongoing large projects such as smart cities are using these systems to monitor overall infrastructure health. Such projects are likely to shape the future of the market over the coming years. Moreover, in 2014, according to regulations established by the Chinese government, SHM system should be used in newly built architectural structures and bridges. It also outlines significance of replaceable, maintainable, and durable sensors with service life of up to 20 years.

Growing infrastructural development across the world and increasing concerns regarding natural calamities are impelling governments worldwide to apply certain regulations regarding SHM, which in turn is expected to work in favor of the market. Increasing focus on low-cost energy harvesting systems and adoption of distributed optic fiber is further contributing to the growth of the market. Surging demand for cost-effective constructions and maintenance is anticipated foster the market growth.

Large structures such as buildings, dams, bridges, and other constructions are liable to various intense loadings during their lifetime, especially during calamities such as cyclones, earthquakes, and typhoons. These events can result in loss of lives and lead to large-scale damage as well as entail economic and social complications. Adoption of these systems reduces the cost of maintenance and repairs, as these SHM systems are designed to provide prior warnings in the event of a possible catastrophe. Therefore, various governments are taking initiatives to promote these systems in order to improve public safety.

Increasing infrastructural development and growing concerns regarding natural calamities are major factors driving the structural health monitoring market. The industry is predicted to develop due to rising need for cost-effective construction and maintenance. Large constructions, such as dams, bridges, buildings, and other structures, must be restored throughout their lives, particularly during cyclones, earthquakes, and strong winds. As these events can result in loss of lives, adoption of structural health monitoring can reduce the cost of repairs or maintenance as these systems are designed to provide warning in the event.

Infrastructure largely contributes to the well-being of individuals as well as the productivity growth of the economy. Superior infrastructure helps to eliminate the need for inspection staff and maintenance, thereby minimizing expenses. As a result, the rapid infrastructural development across the globe has propelled the demand for structural health monitoring systems. The rise of infrastructure projects in many industries has unfolded numerous growth opportunities for the market. Moreover, countries such as China, U.S., and Germany are increasingly investing in the market. As a result, the demand for structural health monitoring is anticipated to increase over the forecast period.

Over the last few decades, many natural disasters have been linked to damaged or failed essential infrastructure. Such an infrastructure often leads to power outages, communication failures, and collapsing of buildings, roads, and bridges. Besides, poor infrastructure also impacts the services of connected industries such as transport, retail locations and among others. As such, it is essential to implement useful methods for optimal decision making across the board, from advising on plant site to structural dimensions and their analysis. Structural health monitoring system plays a vital role in providing real-time information. Hence, the market is anticipated to witness increased demand over the coming years.

The future of the proposed retail, corporate, and transportation projects seems uncertain owing to the growing preference for remote working and the growing popularity of online shopping, and subsequently, the dwindling brick-and-mortar retail sales. This, in turn, is expected to restrain the demand for structural health monitoring systems. Nevertheless, the demand is expected to recover in the long term as the retail industry is poised for significant growth over the next few years as the market reopens, and the construction of commercial establishments, bridges, and other infrastructure also gains traction.

Based on solution, the market has been categorized into hardware and software & services. The hardware segment dominated the market in terms of revenue in 2017 owing to significant cost of integral elements of SHM systems such as sensors and data acquisition systems. Hardware components are required to be installed in large numbers to cover structures such as buildings, dams, bridges, stadiums, and airframes.

In terms of different types of hardware solutions, sensors are projected to be a more prominent revenue contributor in the market. Advancements in sensor technologies, increasing usage of smart materials, and smart structures with embedded sensors are supplementing the growth of the market.

By technology, the market can be bifurcated into wired and wireless SHM. The wired segment accounted for a larger share in the market in 2017. Wired systems are widely adopted for continuous monitoring of distinct types of structures as there is no limitation on long-distance data transfer as they provide reliable connectivity. Additionally, wired SHM systems are already being used for assessment worldwide of various structures including buildings, dams, and bridges in different countries.

Moreover, wireless SHM systems are projected to register a CAGR of 18.2% over the forecast period. The segment has emerged as a technology that will significantly influence the field of structural monitoring and infrastructure asset management.

On the basis of application, the SHM market has been divided into buildings & stadiums, bridges & dams, airframes & wind turbines, vessels & platforms, and large machine & equipment. Bridges & dams accounted for over 32.0% of the overall revenue in 2017. In 2014, according to the U.S. Department of Transportation (DOT), more than 61,000 bridges across the country were structurally deficient, which needed significant monitoring and inspection for maintenance and repair work. Similarly, in other regions, growing number of functionally obsolete and structurally deficient bridges is creating significant demand for structural health monitoring systems for monitoring and inspection of bridges. 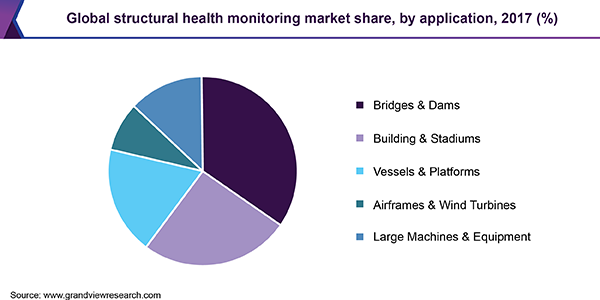 Building & stadiums are poised to witness a noteworthy CAGR of 17.8% over the forecast period. Rising number of sporting events such as FIFA World Cup and Olympics are creating demand for infrastructure including stadiums. Furthermore, governments are also promoting the use of these systems as they increase security of the infrastructure.

Asia Pacific is anticipated to have highest CAGR over the forecast period. Due to the significant expansion of infrastructure projects such as bridges, power plants, and smart cities in Asia Pacific, structural health monitoring is gaining prominence. Many countries, including China, India, and others, are boosting their investments in infrastructure, such as bridges and buildings, to support economic growth. The primary drivers for the market expansion are rapid urbanization and an urgent need for high-quality infrastructure. As a result of the growing number of civil infrastructure projects, structural health monitoring systems will be in high demand to maintain and monitor the state of each structure and prevent catastrophic failures.

The market is fragmented in nature owing to the presence of a large number of manufacturers offering SHM solutions. Companies are focusing on strategies such as mergers and acquisitions, joint ventures, product launches, and partnerships to sustain and retain their share in the highly competitive arena. These strategies help them in expanding their global and regional presence as well as offer enhanced product portfolio to their customers.

This report forecasts revenue growth at global, regional, and country levels and analyzes industry trends in each of the sub-segments from 2015 to 2025. For this study, Grand View Research has segmented the global structural health monitoring market report based on solution, application, technology, and region: