The global structural heart devices market size to be valued at USD 9.1 billion by 2025 and is expected to grow at a compound annual growth rate (CAGR) of 9.15% during the forecast period. The large prevalence of target disease is the key driver of the market. Almost 60 million people in the U.S. have structural defects in their hearts. This accounts for around 20% to 25% of the total population. This indicates the huge scope of the devices addressing structural heart defects. Structural heart disease (SHD) is a wide category of percutaneous treatments for the patients with both acquired heart disease and congenital heart disease (CHD) that involves functional and structural abnormalities of cardiac chambers, proximal great vessels, and heart valves. 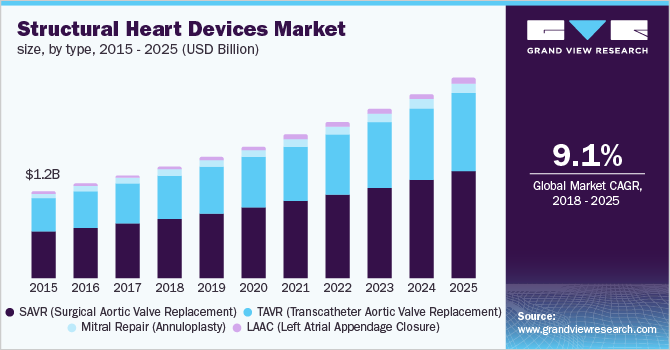 The reimbursement scenario is likely to become favorable making procedures such as TAVR (Transcatheter Aortic Valve Replacement) affordable. As the target population ages, their medical expenditure is covered under the Centers for Medicare and Medicaid Services (CMS). It will ease the burden of healthcare expenditure, thereby encouraging more people to opt for the treatment. This is a positive impact-rendering factor for procedures such as Left Atrial Appendage Closure (LAAC), which are useful for the reduction of risk of stroke.

Companies such as Medtronic and Edwards Lifesciences Corporation have initiated clinical trials and received Investigational Device Exemption (IDE) approval in early 2016. Medtronic initiated low-risk patient enrollment in August 2016 and is approved for use in high-risk patients in Europe.

In January 2016, Japan Lifeline announced the approval of Figulla Flex II (atrial septal defect (ASD) occluder), manufactured by Occlutech. Occlutech Holding AG operates in the area of structural heart disease treatment and was incorporated in Germany in the year 2003.

The market is likely to driven by the surge in the number of people suffering from structural heart diseases. As these diseases are usually congenital, they frequently occur among infants.Tissue-enhanced aortic valves are helpful in structuralreplacement and repair of the heart and hence people with the disease are moving toward such innovations.

The advent of technology has enhanced the functioning of structural heart devices. The improved treatments have raised the standard of living and increasing life expectancy. Since structural heart surgeries are minimally invasive, they are chosen over traditionalinvasive procedures like open-heart surgery.

According to The Numerous Foundation, approximately 1 out of every 100 infants has congenital cardiac disorders, which can vary from moderate to severe.As per Micro Interventional Devices, Inc., structural heart abnormalities affect approximately60 million people in the U.S. or about 20 to 50% of the elderly.These figures demonstrate the necessity of structural heart diagnosis devices, which creates an opportunity for industry players.

However, the adoption ofstructurally advanced devices issluggish, particularly in developing countries as these devices are costlier than their traditional equivalents.Stroke, renal failure, and gastrointestinal issues are all complications connected with these devices, which occur following a mitral valve replacement treatment. The high cost of modern structural heart implants, as well as the risks associated with treatments, are major market restraints.

Based on the type, the market is segmented into surgical aortic valve replacement (SAVR), transcatheter aortic valve replacement (TAVR), mitral repair, and left atrial appendage closure (LAAC). SAVR dominated in 2016 due to its proven efficacy in the treatment and established reimbursement codes. SAVR also has well-established surgical guidelines, which makes it a preferred choice for surgeons as they can refer to it during the surgery.

LAAC is anticipated to be one of the fastest-growing segments in the coming years. The minimally invasive nature of the procedure is the key reason for this rapid growth. The procedure reduces the risk of blood clotting, thereby reducing the risk of stroke, especially ischemic stroke.

North America dominated by market share in 2016 and is followed by Europe. A strong preference for minimally invasive procedures is the key reason for this dominance. Since 2006, the rate of bypass surgeries has decreased by 43%, whereas the rate of endovascular procedures has increased by manifold times. 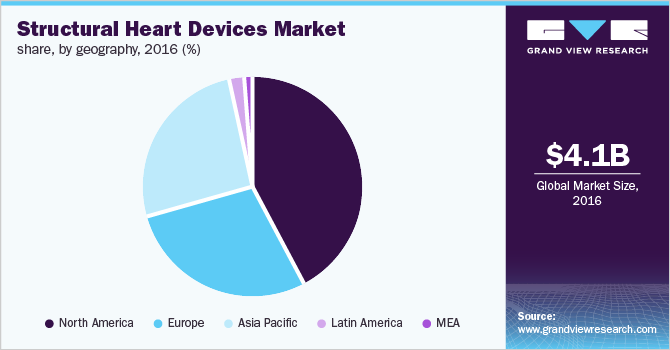 Asia Pacific is anticipated to observe the fastest growth over the coming years. This can be attributed to the increasing awareness about cardiac diseases, better newborn screening programs, and improvement in healthcare access. 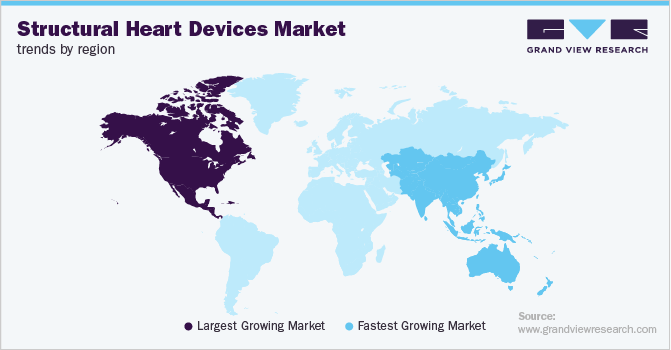 There is a steady growth in the industry as new players are entering the market. For instance, in May 2016, a leading medical devices company, Johnson & Johnson announced its intentions to enter the structural heart market.

While there are new entrants, the existing players are strengthening their foothold in the market by entering into mergers & acquisitions. In December 2016, Boston Scientific acquired Neovasc, a biological tissue business in a deal worth USD 67 million, and will additionally invest USD 7 million in Neovasc.

Some of the prominent players in the structural heart devices market include:

This report forecasts revenue growth and provides an analysis of the industry trends in each of the sub-segments from 2014 to 2025. For the purpose of this study, Grand View Research has segmented the global structural heart devices market on the basis of type and region. 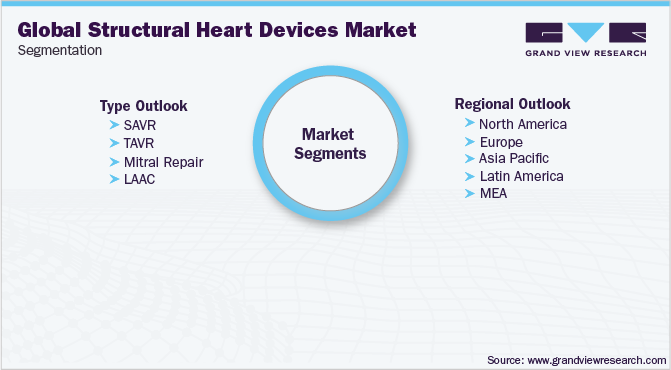