The global subdermal contraceptive implants market size was estimated at USD 744.9 million in 2018. An increase in use of modern contraceptive methods, rising awareness about sexual health and family planning, and increase in government initiatives are likely to drive the market during the forecast period. An increase in unintended pregnancies and the proportional increase in number of abortions is further adding to healthcare costs borne by governments. Hence, governments of several countries have initiated programs to improve access to contraception methods. 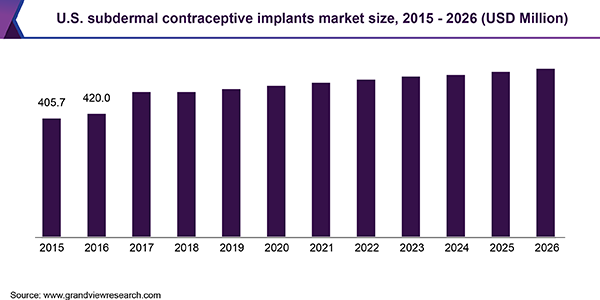 Long-acting birth control methods have become more popular in the U.S. over the past decade and their adoption has increased under the current government. Major advantages of contraceptive subdermal implants include more than 99.0% effectivity, cost-efficiency, quick return of natural fertility after removal, and useful to women allergic to estrogen. In March 2011, Merck launched NEXPLANON, a long-acting reversible hormonal subdermal contraceptive implant in the U.S.

Governments of various countries are undertaking initiatives to improve accessibility to subdermal implants for birth control. For instance, Medicaid and other insurance plans cover FDA-approved birth control products without cost-sharing. The Tanzanian government and NGOs in the country are working on improving the supply chain of birth control devices and products. Several U.S. federal organizations have taken measures to increase the availability of contraceptives by mandating their coverage by health insurance companies and permitting emergency birth control products and devices to be available for purchase over the counter.

Recently, the UN collaborated with NGOs such as Marie Stopes International and contraceptive manufacturers such as Bayer HealthCare’s Jadelle to meet the contraceptive needs of women in underdeveloped economies of Africa by reducing prices by approximately 50.0%. Moreover, inexpensive subdermal contraceptive implants, such as the Sino-implant (II), are expected to gain popularity in Asia and Africa, which is likely to drive the market over the forecast period.

On the basis of region, the subdermal contraceptive implants market is segmented into North America, Europe, Asia Pacific, Latin America, and Middle East and Africa. North America held the largest share in 2018 and is expected to maintain its dominance during the forecast period. High disposable income, increased awareness about contraceptives, and technological advancements as well as supportive government schemes in the field are some of the key factors responsible for the dominance of this region. Rise in demand for contraception and high abortion rate are other factors anticipated to boost the market for subdermal implants in the coming years. In 2015, the CDC reported 638,169 abortions, or 11.8 abortions per 1,000 women (aged 15 to 44). 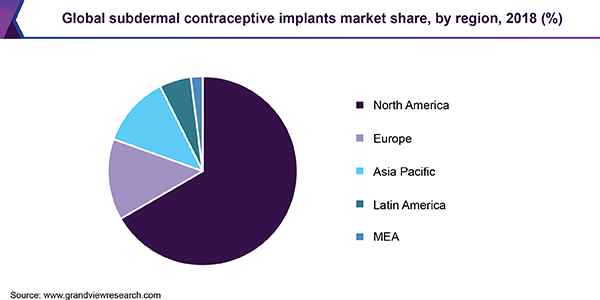 Asia Pacific is anticipated to grow at the fastest rate during the forecast period due to increase in awareness and favorable initiatives undertaken by governments and private organizations to enhance access of contraception methods to women in need. According to WHO, nearly 214 million women in developing economies such as India, who want to avoid pregnancy, do not use modern contraceptive methods, such as subdermal implants. Whereas in Indonesia, nearly 64.0% of married women use contraception; about 57% rely on modern contraceptive methods, whereas around 7.0% use traditional methods.

Some of the key players operating in the market are Bayer AG; Merck & Co. Inc.; and Shanghai Dahua Pharmaceutical Co., Ltd. Players have been entering into partnerships with other players to make subdermal implants for birth control available to women at low costs in developed and developing economies. In November 2016, Levoplant/Sino-implant (II) received approval from the United Nations Population Fund for purchase by its country programs through the WHO review panel. In January 2016, Bayer reduced the price of JADELLE by 50% to make it available for women in developing countries. Bayer’s aim is to make this underutilized method more affordable and accessible to women in developing countries.

Since the launch of Nexplanon in 2011, Merck has delivered 20 million subdermal contraceptive implants to women in more than 50 developing countries, providing them with highly effective, long-acting, reversible birth control. The company’s major programs are based in Kenya, India, Nigeria, Uganda, Senegal, and the U.S.

This report forecasts revenue growth at global, regional, and country levels and provides an analysis on the latest industry trends in each of the sub-segments from 2015 to 2026. For the purpose of this study, Grand View Research has segmented the global subdermal contraceptive implants market report based on region: