The global surgical retractors market size was estimated at USD 1. 41 billion in 2017 and is expected to register a CAGR of 3. 2% during the forecast period. Rise in surgical procedures globally has driven demand for medical instruments. As per a study conducted by the World Health Organization (WHO), in collaboration with the World Bank, it was estimated that in 2004, 234. 2 million operations were performed globally and the volume increased to 312. 9 million by 2012.

Technological advancements have also supplemented the growth of the global market for surgical retractors. Such advancements in medical devices and equipment have transformed operative procedures over the past few decades. Introduction of devices such as illuminated, single-use, laparoscopic retractors is a key example of this. Increasing the global geriatric population is expected to fuel the market in the future. According to a report by the United Nations Department of Economic and Social Affairs (2015), the number of people aged 60 and over is expected to grow by 56% from 2015 to 2030. The geriatric population was pegged at 901. 0 million in 2015 and by 2050, it is expected to reach around 2. 1 billion. A sedentary lifestyle in developed, as well as developing countries, has led to an increased prevalence of obesity, cardiovascular diseases, cancer, and diabetes. Rising prevalence of lifestyle disorders, coupled with increased per capita healthcare expenditure, are key factors contributing to the growing number of surgical procedures, thereby driving demand for and usage of surgical retractors.

Surgical retractors can be hand-held or self-retaining. The self-retaining segment is anticipated to register the highest growth rate owing to technological advancements. The head-mounted fiber-optic incorporated ‘The Opight’ retractor is an example of such advancements. Moreover, the rise in spending on medical instruments in developed as well as developing countries will drive this segment.

Established players have been focusing on research and development activities to introduce innovative product lines and supporting accessories into the market. For instance, in December 2016, Mediflex released its patented technology FlexGuard Blade Cushion. It is a disposable and sterile accessory designed for retractor blades, which serves as a shock absorber and increases patient safety.

Orthopedic retractors held the dominant share in the surgical retractors market in 2017. This can be attributed to the rising geriatric population. Elderly people are more prone to knee and hip arthritis. Musculoskeletal pain, such as that resulting from hip and knee osteoarthritis, is a major reason for the increasing prevalence of physical disability globally. According to the Centers for Disease Control and Prevention (CDC), more than 30 million adults in U. S. are affected by arthritis.

Increasing demand for knee and hip replacement surgeries among obese patients is another important factor contributing to segment growth. Obesity has become a significant public health concern in most developed countries. WHO states that the rate of obesity has tripled since 1975. It also states that in U. S., around 650 million adults above age 18 are obese, while more than 1. 9 billion are overweight.

In terms of application, the obstetrics and gynecology segment held the majority share owing to the surge in the prevalence of gynecological disorders such as polycystic ovary syndrome (PCOS), uterine cancer, and cervical cancer. Moreover, rising awareness about the benefits of regular check-ups has resulted in more gynecological surgeries, thereby boosting the usage of retractors in this segment.

The neurosurgery segment is expected to grow at a higher pace during the forecast period. The availability of technologically advanced instruments for neurosurgery, coupled with high spending on medical devices and equipment by healthcare facilities, will boost segment growth in the future.

In terms of end-use, hospitals held the dominant share of 51. 7% in 2017. A high volume of operative procedures performed in hospitals is a key factor contributing to the leading share of this segment. Developing regions such as the Asia Pacific and the Middle East and Africa are witnessing improvement in healthcare infrastructure and economic development and this is slated to drive this end-use segment. 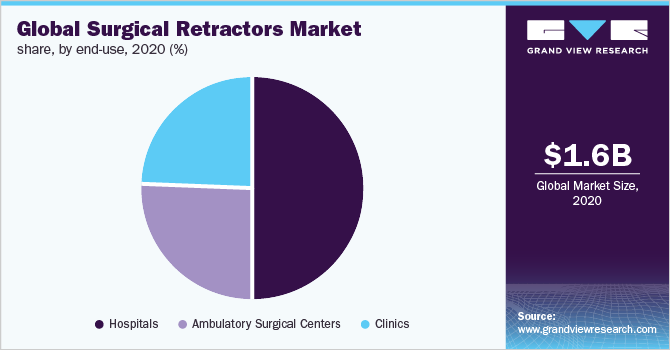 The ambulatory surgery centers segment is expected to showcase significant growth during the forecast period. The growth of the segment is attributed to the rising preference for minimally invasive surgeries and robot-assisted surgery. Rising awareness about aesthetic procedures will further drive this segment in developed regions. Products by companies such as Senn and Beckman-Weitlaner have played a pivotal role in aesthetic procedures.

In 2017, North America accounted for the dominant share in the global market. Numerous collaborative efforts by key players to improve their R&D proficiencies and ensure high-quality standards are expected to boost demand for retractors across this region.

The region’s dominance can also be attributed to the high disease burden. For instance, according to a study conducted by the CDC, heart disease is the main cause of the high mortality rate in the U. S., among both women and men. An increase in the adoption of robot-assisted minimally invasive surgeries will further fuel the North American market.

The Asia Pacific market is expected to register a lucrative CAGR over the coming years. High growth witnessed by this region is believed to be a result of constant R&D investments by prominent players and efforts to commercialize their products at a relatively affordable price. Growing healthcare infrastructure, coupled with increased per capita expenditure, will further boost the regional market.

The market has witnessed steady growth as a result of extensive regional expansion strategies, collaborative research initiatives, and mergers and acquisitions activities by major players. For instance, in March 2017, Ethicon, a subsidiary of Johnson & Johnson, announced the acquisition of Torax Medical, Inc. This acquisition is aligned with the company’s strategy of expanding its minimally invasive surgery product portfolio.

Another key strategy adopted by players is extensive research and development investments to offer a technologically advanced product portfolio. For instance, in October 2017, QSpine, a U. K. -based manufacturer, launched SURE, an illuminated, modular, and single-use surgical retractor.

This report forecasts revenue growth at global, regional, and country levels and provides an analysis of the latest industry trends in each of the sub-segments from 2014 to 2025. For this study, Grand View Research has segmented the global surgical retractors market report based on type, product, application, end-use, and region:

How big is the surgical retractors market?

What is the surgical retractors market growth?

Which segment accounted for the largest surgical retractors market share?

b. North America dominated the surgical retractors market with a share of 34.5% in 2019. This is attributable to numerous collaborative efforts by key players to improve their R&D proficiencies and ensure high-quality standards.

Who are the key players in surgical retractors market?

What are the factors driving the surgical retractors market?

b. Key factors that are driving the market growth include increasing rise in surgical procedures, increasing global geriatric population and technological advancements, rising prevalence of lifestyle disorders, and increased per capita healthcare expenditure.