The global surgical robots market size was valued at USD 2.30 billion in 2020 and is expected to expand at a compound annual growth rate (CAGR) of 21.6% from 2021 to 2028. Growing adoption and acceptance of minimally invasive surgeries owing to benefits such as shorter hospital stays and the introduction of cost-effective and flexible surgical robots by the new market players are some of the key factors driving the growth. The increasing penetration of international players is positively impacting the market growth. The increasing number of approvals from regulatory authorities, such as the FDA, to the players, is one of the prominent factors aiding the growth of the market. For instance, in 2019, Ion, the robotic surgical system provided by Intuitive Surgical, Inc., received 510 (k) clearances from the FDA. Moreover, the increasing adoption of robot-assisted surgeries such as hysterectomies, the rising number of robotic systems for surgical interventions, and the constant R&D for robotic surgical technologies are other factors supporting the growth. 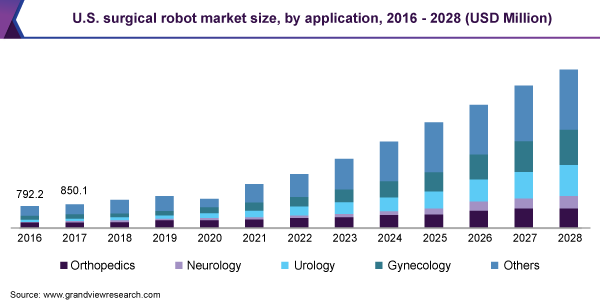 The rising number of knee and hip replacement surgeries due to the growing prevalence of arthritis, bone degenerative diseases, osteoporosis, and related injuries is one of the factors driving the market growth. For instance, according to the Agency for Healthcare Research and Quality, more than 450,000 total hip replacement surgeries are carried out every year in the U.S. As per the statistics provided by the Australian Institute of Health and Welfare (AIHW), the rate of total knee replacements for osteoarthritis increased by around 38% from 2005-06 to 2017-18. Thus, an increasing number of surgeries is anticipated to boost the market growth during the forecast period.

The strategic initiatives by international, established players are further boosting the growth of the surgical robots market. For instance, in 2019, Johnson & Johnson’s subsidiary, Ethicon, acquired Auris Health, a developer of robotic technology platform. This acquisition is expected to support the company’s commitment to combat lung cancer and would help in expanding its digital surgery portfolio across multiple surgical specialties. In 2019, Stryker Corporation announced the acquisition of OrthoSpace, Ltd. This acquisition will help in strengthening the surgical portfolio of Stryker Corporation. Hence, such initiatives are likely to propel visibility, adoption, and growth during the forecast period.

Surgical robots have witnessed a paradigm shift in recent years majorly due to technological advancements in the field of 3D imaging, data recorders, data analytic systems, microscopic cameras with high definition, remote navigation technology systems, motion sensors, robotic controlled catheters, and other accessories utilized for surgeries. Such advancements are helpful in the development of newer applications for existing platforms, increasing adoption, and creating disruptive technologies that would be beneficial in driving the market in near future.

Moreover, although robotic surgery systems are marketed as a safer alternative to traditional surgeries, there are various associated risks with these systems, including mechanical errors and human errors. These systems have multiple components and could malfunction, leading to more complications. However, technological advancements and betterments in the systems that would help in reducing the errors can lead to positive outcomes and boost the market growth during the forecast period.

Based on application, the market is segmented into neurology, gynecology, urology, orthopedics, and others. The others segment accounted for the highest revenue share in 2020. Other applications mainly include the usage of surgical robots in laparoscopy, oncology, and other general surgeries. The increasing demand for minimally invasive laparoscopic surgeries and the growing usage of surgical robots in cancer are the major factors driving the growth.

The neurosurgery segment is expected to expand at a lucrative CAGR during the forecast period. Remarkable credentials associated with the neurosurgery procedures deliver successful outcomes and reduce the limitations associated with traditional neurosurgery methods. Owing to these factors, the usage of robots in this field has increased. Moreover, the growing usage of surgical robots for treating patients suffering from tumors and other brain conditions, along with technological advancements in robotic brain surgeries, is further anticipated to drive the market growth. For instance, as per an article published by the Robotic Industries Association (RIA), in 2019, a remote brain surgery using robotic assistance and 5G technology was carried out. Such instances signify the growth potential of robotics in the neurosurgery segment.

North America dominated the global market with a revenue share of 51.3% in 2020. The significant presence of international players, the lineup of many products for FDA clearance, ongoing developments in robotics, and the demand for minimally invasive surgeries to reduce the post-operative period are the key factors driving the penetration in the region, thereby fueling the growth of the market.

The Asia Pacific region is also expected to expand at a lucrative CAGR during the forecast period. Improvements in the development of instruments are likely to permit efficient working conditions for surgeons and are expected to fuel the regional market growth. The rising adoption of robotic technologies in the region, coupled with increasing awareness regarding robotic surgeries and their benefits, is expected to boost the overall growth. 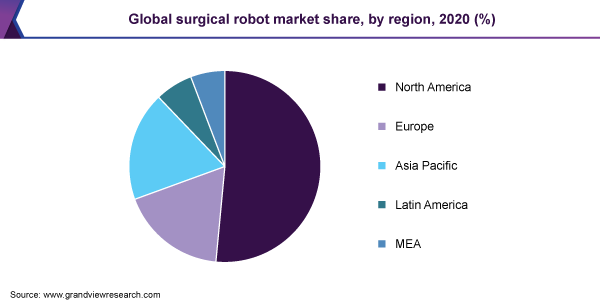 The competition is high among the existing market players owing to the rise in demand for minimally invasive procedures coupled with technological advancements. Some of the key players operating in the market are Smith & Nephew; Medrobotics; TransEnterix Surgical, Inc.; Intuitive Surgical; Renishaw plc; Medtronic; Stryker Corporation; Zimmer Biomet; and THINK Surgical, Inc. The rising demand is likely to promote the entry of new companies in the future, fueled by increasing acceptance and awareness regarding robotic surgeries.

Furthermore, strategic developments by companies in the form of mergers and acquisitions are expected to propel the competition and fuel market growth. For instance, in February 2020, Medtronic acquired Digital Surgery, a privately-owned surgical AI company. The company specialized in data analytics, digital education, and training. This acquisition was expected to help Medtronic strengthen its robot-assisted platform in surgery and broaden the company’s portfolio with the addition of a new robotic system named Hugo. Some of the prominent players operating in the global surgical robots market are:

This report forecasts revenue growth at global, regional, and country levels and provides an analysis of the latest industry trends in each of the sub-segments from 2016 to 2028. For this study, Grand View Research, Inc. has segmented the global surgical robots market report based on application and region:

How big is the surgical robots market?

What is the surgical robots market growth?

Which segment accounted for the largest surgical robots market share?

b. North America dominated the surgical robot market with a share of 52.0% in 2019. This is attributable to the increasing number of hospitals that are opting for robot-assisted surgeries, high healthcare spending by the U.S. government, and growing robotic investments in the region.

Who are the key players in the surgical robots market?

b. Some key players operating in the surgical robot market include Intuitive Surgical; Stryker Corporation; Medtronic; Smith & Nephew and others.

What are the factors driving the surgical robots market?

b. Key factors that are driving the surgical robot market growth include increasing adoption of minimally invasive surgeries among patients owing to its added benefits such as the need for shorter hospital stays by patients, compared to traditional surgery, the introduction of flexible and cost-effective surgical robots by new manufacturers.

Which application segment accounted for the highest revenue share in the surgical robots market?

b. The other application segment which includes usage of surgical robots in laparoscopy, oncology, and other general surgeries accounted for the highest revenue share in 2020 in the surgical robot market.