Global synthetic ester lubricants market size was USD 1.3 billion in 2013. Rising demand from automotive and aerospace industry in order to produce fuel efficient and optimum engines has resulted in augmenting market growth for the product. In addition, increasing demand from heavy machinery manufacturers owing to its ability to withstand high temperatures is also playing a major role in fueling growth over the forecast period.

Synthetic ester lubricants are used in the form of engine oils to increase drain intervals and provide excellent film protection. These lubricants operate on a wide temperature range and have emerged as a cost effective solution to reduce component failure and extend drain intervals, which has resulted in increasing their market penetration. Furthermore, OEMs have endorsed the use of these lubricants in their product offerings owing to improved temperature stability and high biodegradability. Aforementioned factors coupled with growing automobile sales in China and India is expected to have a positive impact on the market demand over the forecast period.

Shifting consumer trends from PAG and PAO based lubricants to ester lubricants owing to improved stability and optimum results at high temperatures and higher flash points is likely to propel growth for the product over the next six years. 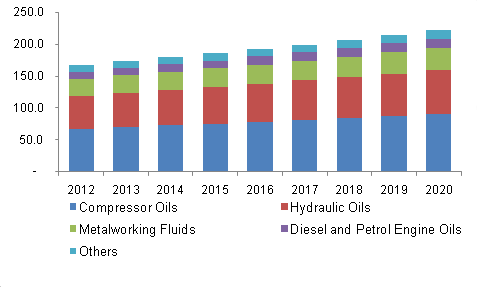 These lubricants offer high biodegradability since the reaction to obtain is reversible. As a result, esters can be broken back into alcohol and acid components. This makes the product extremely favorable among other synthetic lubricants, which have been scrutinized by various regulations due to adverse environmental impact.

Global volume for these lubricants in compressor oils was 70.8 kilo tons in 2013. Rising demand for these oils as compressor oils owing to improved thermal stability and high hydrolytic stability is expected to propel growth over the next few years. Chemical composition of these esters improves its ability to control moisture content. Compressor oils act as coolants, lubricants as well as oil seals.

Hydraulic oils accounted for the second largest market share behind compressor oils. The product accounted for over 31.0% market share in 2013 and is expected to witness significant growth over the next six years. Growing use of ester based hydraulic oils in various industries including oil & gas and energy is likely to drive the market growth. In addition, availability of various grades of ester based hydraulic oils for a wide range of temperature range increases its acceptability in industrial applications. Furthermore, biodegradability poses as a major driver for use in environmentally sensitive areas including forests and water-course maintenance.

Asia Pacific demand for synthetic ester lubricants was valued at USD 295.0 million in 2013 and is expected to witness substantial growth going forward till 2020. Growing use of these products due to manufacturing industry growth in the region is likely to augment market growth over the projected period. Furthermore, large investment from major manufacturing firms in the regions is expected to increase market opportunities for these oils over the forecast period.

Europe dominated the global market volume, accounting for 37.6% of the total share in 2013 primarily due to high demand from aerospace and manufacturing industries. North America also contributed a significant share, accounting for 31.1% of the total share in 2013. However, Europe and North America are expected to lose market share owing to market saturation as well as substantial growth in Asia Pacific over the forecast period.

North America synthetic ester lubricants market is expected to be driven on account of aerospace and automobile industry growth. Presence of major aerospace companies including Boeing in the region has resulted in increase in requirements from engine oils application. Increasing automobile production in the U.S. and Mexico coupled with growing number of vehicle manufacturers setting up bases in Mexico is expected to further increase consumption for automotive maintenance.

Industrial growth in the region is expected to result in an increased use of heat transfer fluids in boilers and machines. In addition, rising disposable income leading to consumers opting for luxury automobiles such as Lexus and Chrysler was a key reason responsible for high demand in North America.

New and improved product development such as fire-resistant ester-based hydraulic oils have been accepted by several industries which are equipped with hydraulic power packs intended for high temperatures and high pressures.