The global tattoo removal devices market size was estimated at USD 114.08 million in 2018 and is expected to expand at a CAGR of 8.5% by 2026. Increasing adoption of laser treatments for aesthetics procedures and high demand for tattoo removal are the major growth drivers. High demand for non-invasive procedures for aesthetics is also fueling the demand.

High prevalence of ‘tattoo regret’ among millennials is expected to propel the demand. For instance, according to an article published by B&T Magazine, nearly 28.6% of females and around 29.7% of males wish to get their tattoo removed while more than 35.0% of population in the age group of 18 to 21 who have been inked, regret their tattoos. 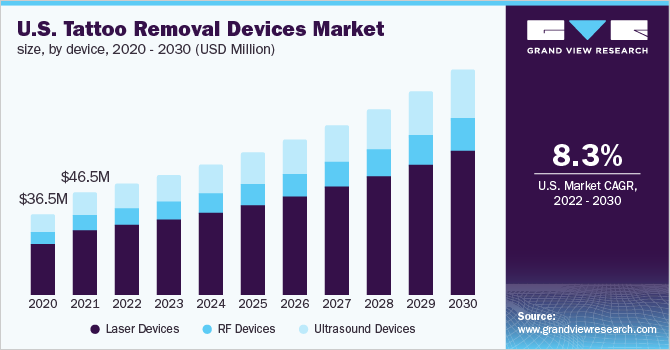 A wide range of techniques, such as laser therapy, pulsed light therapy, dermabrasion, plastic surgery, and chemical peels, are used for tattoo removal. Majority of these techniques are effective, safe, and non-invasive. Thus, increasing popularity of these techniques coupled with growing demand for non-invasive procedures is expected to boost the tattoo removal market over the forecast period.

Most of the U.S. based companies refrain from hiring candidates with tattoo, especially visible designs in the areas such as below the wrist, above the collar, and face. For instance, as per a study conducted by Pew Research Center, nearly 76% of the study participants believed that visible tattoo reduces the hiring chances of a candidate during an interview, while, around 42% of the participants believe that visible tattoos are inappropriate at workplace. Thus, such social issues are anticipated to increase the demand for tattoo removal.

On the basis of device type, the market is categorized into laser, radiofrequency, and ultrasound devices. Amongst these, laser therapy was valued at USD 71.0 million in 2018 and is expected to expand at a rapid pace over the forecast period.

Various types of lasers used include Q-Switched Nd-YAG laser, Q-switched ruby laser, and Q-Switched Alexandrite laser. These devices efficiently remove the black as well as colored tattoos. Features such as reduced risk of infection and minimal damage to nearby skin cells, no side effects, and ease of use are anticipated to fuel the segment growth.

On the basis of end use, the tattoo removal devices market is divided into dermatology clinics and medical spa and beauty centers. The dermatology clinics segment led the market in 2018, attributed to the presence of skilled and certified professionals in such clinics. Dermatologists have proper medical training to ensure avoidance of scarring, change in skin texture, and burns and other wounds during or after the removal treatment, thus, increasing the procedure safety and facilitating the segment growth. 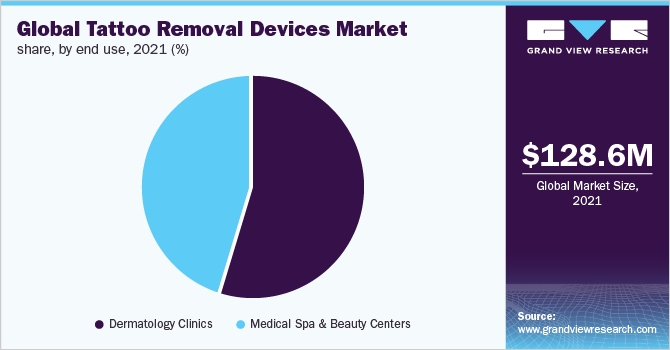 Medical spa and beauty centers segment is expected to expand at a substantial CAGR over the forecast period owing to speedy approvals from local authorities. Increasing popularity of these centers due to their location alongside coffee shops, clubs, and other youth attraction places is anticipate to further fuel the segment growth.

Increasing demand for safe and effective procedures is promoting the medical spas and beauty centers to adopt innovative removal techniques. The techniques adopted by medical spas are extremely hygienic and safe. Moreover, these treatments are only performed by licensed experts, thus, facilitating segment growth.

North America led the market and is anticipated to expand at a lucrative CAGR over the forecast period, attributed to increasing number of tattoo parlors and individuals getting inked coupled with the availability of advanced procedures.

Europe followed North America in terms of market share in 2018 due to growing innovations in laser tattoo removal techniques and speedy adoption of laser technology. In addition, high consumer preference for laser treatment as compared to other treatments is fueling the regional growth.

Asia Pacific is estimated to be the fastest growing region owing to increase in number of individuals getting inked, in countries such as Japan and India. Furthermore, increasing disposable income especially in developing countries is anticipated to fuel the growth.

This report forecasts revenue growth at global, regional, and country levels and provides an analysis of the latest industry trends in each of the sub-segments from 2015 to 2026. For the purpose of this report, Grand View Research has segmented the global tattoo removal devices market report on the basis of device, end use, and region: