The global tennis racquet market size was valued at USD 351.8 million in 2018. Rising awareness about importance of sports in maintaining health and fitness has been increasing the participation rate of tennis over the world. Furthermore, tennis has been gaining significant popularity as a sport for better fitness, especially among the elderly population, in developed economies including the U.S., Germany, and France.

Cardio tennis has gained remarkable popularity among all the age groups. It is a group activity that involves high-energy workout including warm-up and cardio workout to burn calories in a healthy way. In 2018, the participation rate in this sport has reached 2.5 million in the U.S. and it grew by almost 12%. 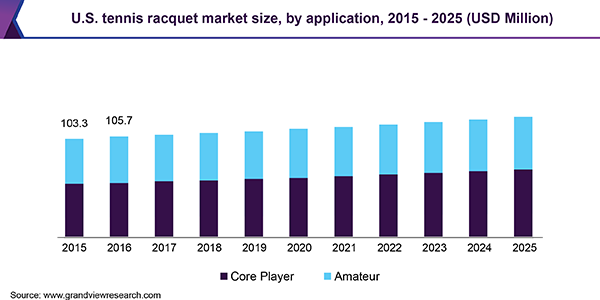 According to the Physical Activity Council, this is the largest one-year growth rate of all the 121 sports and activities. Around 7% of the total tennis players in the U.S. started as cardio players. Increasing health concerns across the world are expected to drive the cardio tennis industry. This, in turn, will promote the scope of racquets in the upcoming future. Participation rate of the youth players has been increasing remarkably over the world. The youth core players grew by more than 6% in the U.S. from 2017 to 2018.

In addition, governments of the developing nations including China and India have been encouraging sports by implementing favorable polices. For instance, in November 2018, the government of India implemented Khelo India-National Programme for the development of sports activity on a domestic level. These policies are expected to promote the scope of tennis activity and thus, in turn, expand the utility of racquet in the near future.

As of 2018, core player held the largest tennis rackets industry share in terms of both revenue and volume. This application segment accounted for about 56.0% share of the total revenue in 2018. According to the Physical Activity Council, core players accounted for the major part of all the tennis play occasions and total expenses of the tennis economy. In addition, among the core players, regular core players who play more than ten times but less than 20 times a year increased more than the frequent players and avid players.

The offline distribution channel dominated the tennis racket industry in 2018 and accounted for more than 70.0% share of the global volume. Easy availability of a wide range of products in the specialty shops is one of the major factors attracting consumers. These stores provide required information and support to consumers through skilled customer service personnel.

The online distribution channel is expected to expand at the fastest CAGR of 4.6% both in terms of revenue and volume from 2019 to 2025. Growing penetration of smartphone users has boosted the growth of e-commerce over the world. Furthermore, convenient purchasing and checkout process of the online retailers including Amazon and Walmart are expected to expand the scope of e-commerce as a selling medium.

As of 2018, carbon fiber held the largest share of 79.3% in terms of revenue. This product has gained significant popularity among consumers due to its lightweight property. Carbon composites allow managing the distribution of weight around the racket more accurately. This implies that these racquets are appropriate for more swing styles and playing. It offers a better combination of balance, weight, and swing weight. Therefore, over the past few years, consumer preference has been shifting towards lightweight products, which can provide required stiffness and strength. Professional players prefer less heavy sports equipment as they allow to perform better than the heavy equipment. 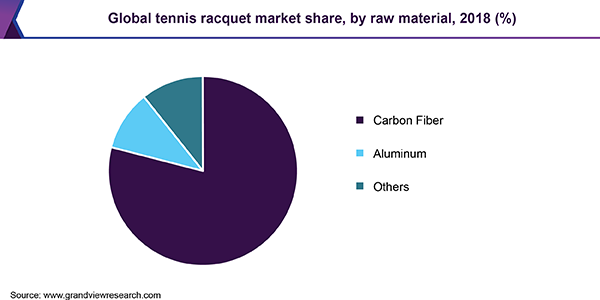 The manufacturers of this industry have expanded their portfolio of the carbon fiber racquets over the years. Furthermore, carbon composites allow the manufacturers to manage the flex pattern of the product so that they can adjust the stiffness at various points on the frame. These carbon fiber products have better strength and they allow the producer to come up with new designs. In 2015, Wilson Sporting Goods, launched a new product line called Clash. It is engineered to fit with any swing style with improved power and accuracy by using carbon mapping technology.

North America dominated the tennis racquet market in 2018 and accounted for more than 30.0% share of the total volume. The U.S. is the prominent market of this region. According to the Tennis Industry Association (TIA), tennis economy has increased by 3% from 2011 to 2019. The overall participation in this sport has raised by 4% from 2009 in the U.S. Among them, the number of youth participants has increased remarkably. Hence, youth racquet shipments grew by 5% from 2012. The overall unit sales of the product has increased significantly in this region.

Asia Pacific is projected to expand at the highest CAGR of 5.5% in terms of revenue from 2019 to 2025. Countries such as China, Australia, Japan, and India have witnessed significant growth in this sport in the past few years. Increasing number of amateur in the above-mentioned countries is expected to promote the scope of racquet in the near future.

This report forecasts revenue growth at the global, regional, and country levels, and provides an analysis on the latest industry trends in each of the sub-segments from 2015 to 2025. For the purpose of this study, Grand View Research has segmented the global tennis racquet market report based on raw material, application, distribution channel, and region: