The global set top box market demand was estimated at 256.2 million units in 2020 and is expected to expand at a compound annual growth rate (CAGR) of more than 4% in terms of volume from 2021 to 2028. The rising internet and broadband penetration and the growing preference for HD channels and on-demand video services are the factors expected to drive the market growth. Transitions across the digital TV arena have played a vital role in transforming the customers’ attitude towards the consumption of media content over the internet and television. A significant surge in the viewership across OTT platforms, such as Amazon Prime Video, Hulu, Disney+ Hotstar, and Netflix, is also expected to contribute to high revenue generation over the forecast period. 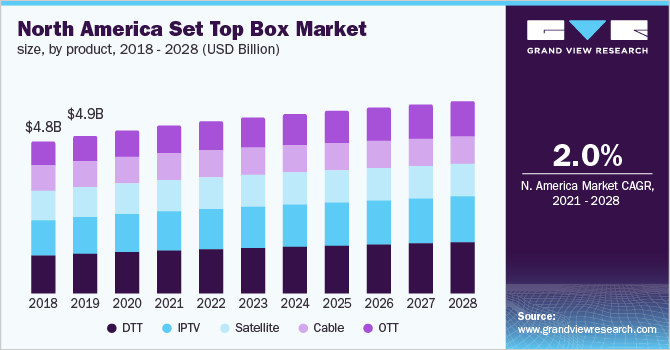 With an increase in disposable income and the progressing middle-class population, the demand for media-rich home entertainment services among consumers is increasing. As such, the growing demand for next-generation Set Top Boxes (STBs) that can support internet-based services, Video on Demand (VoD), and television broadcasting are opening new opportunities for the market incumbents. The media landscape is also undergoing a paradigm shift in the wake of the outbreak of the COVID-19 pandemic, primarily driven by technology proliferation and integration of digital technologies. As a result, the leading companies are focusing on adopting the latest technologies to replace the conventional settings. At the same time, as a result of the lockdowns imposed in several countries as part of the efforts to contain the spread of coronavirus, individuals are spending a considerable amount of time indoors, thereby driving the demand for media & entertainment services. These shifting patterns are subsequently expected to drive the growth of VoD and OTT consumption and support significant revenue generation over the forecast period.

The demand for Android STBs is also growing significantly owing to the enhanced and personalized experience Android STBs can offer. Features, such as a robust app ecosystem, voice recognition, TV Input Framework (TVIF), and video conferencing, offered by Android STBs are fueling the demand for these devices. Multiple connectivity options, such as Wi-Fi, Ethernet, HDMI, and Bluetooth, are also playing a vital role in driving the demand for the latest STB models. The integration of advanced technologies, such as Bluetooth Low Energy (BLE), voice-enabled remote, and Full HD and 4K/8K resolution support, in the latest STB models to make them stand out against the conventional set top boxes, also poses immense growth potential for the market over the forecast period.

Cable STBs dominated the market in 2020 with more than 70 million units sold during the year. Substantial adoption of cable STBs in the developing economies across the Asia Pacific has particularly allowed the cable segment to dominate the market over the past decade. Government mandates for cable digitization and benefits, such as increased channel carrying capacity, offered by cable TV are further driving the product demand. Having realized that cable TV remains the most popular platform for creating awareness and spreading messages among the masses, several cable service providers are improving their technology and service offerings. However, the adoption of cable TV has been dwindling over the past few years in line with the shifting consumer preference toward technologically advanced content viewing platforms.

The OTT segment is anticipated to exhibit the highest CAGR of more than 6.0% from 2021 to 2028. The OTT industry has been witnessing significant advances in technology and allowing broadcasters to deliver improved sound quality and high-resolution picture quality. OTT platforms offer several enhanced features, such as simplified payment methods, reduced time-to-content, and accessible time-shifted viewing. Companies, such as Kaonmedia Co., Ltd., are focusing on introducing AI-enabled set top boxes supporting AI assistants, home IoT, media services, and video communication features. Several other leading companies, such as AVIQ Systems, have developed STBs aimed at operators willing to bundle their multi-screen strategy with a self-branded STB in addition to or in place of apps for smartphones, smart TVs, and tablets.

Based on content quality, the set top box market is segmented into HD and Full HD and 4K and above. The HD and Full HD segment is anticipated to dominate the market with a volume and revenue share of over 90% over the forecast period, primarily owing to the range of benefits, including accessibility to a broader variety of channels than the 4K counterpart. The HD and Full HD STBs are increasingly replacing conventional SD boxes owing to the benefits, such as improved sound and picture quality and exclusive channels, they can offer. The growth in the sale of smart TVs and 8K TV sets has eventually increased the availability of HD services supported by these TV sets, which also bodes well for the growth of the segment over the forecast period. 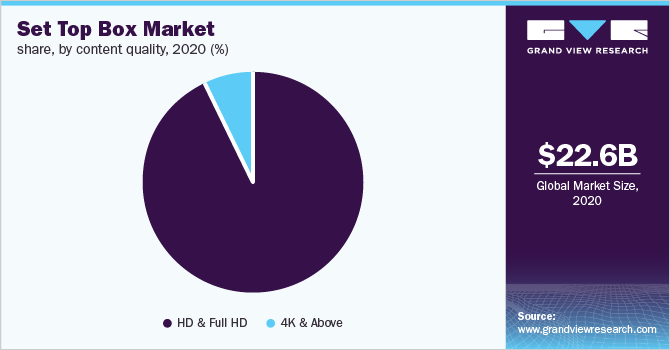 The 4K and above segment is projected to grow substantially, exhibiting a CAGR of more than 8% from 2021 to 2028. The growth can be attributed to the rising demand for high-resolution content and sharp picture quality. A regulatory landscape favoring the installation of set top boxes and the large-scale digitization programs being pursued in various countries are expected to contribute to the growth of the segment. In the U.S., government authorities, such as the Federal Communications Commission (FCC), are pursuing favorable initiatives to support the third-party STB manufacturers, thereby creating new growth opportunities for manufacturers of 4K STBs. The 4K and above segment is anticipated to gain rapid traction in the Asia Pacific region, particularly because Asia Pacific countries, such as Taiwan, China, and South Korea, are home to several low-cost STB manufacturers.

The Asia Pacific region accounted for the largest market share of over 40% in 2020 and is expected to continue dominating the market over the forecast period. The rising consumption of media and entertainment content, especially by the middle-class population across the region, bodes well for the growth of the regional market. The growing awareness among the general populace about technologically advanced products and benefits offered by technologically advanced products in terms of features, quality, and affordable pricing, as compared to the conventional set top boxes are expected to drive the product demand over the forecast period. The growing OTT media services market is also expected to contribute to the growth of the market. Asia Pacific is home to numerous established manufacturers, such as Kaonmedia Co. Ltd. and Huawei, which are focusing aggressively on the integration of latest technologies, such as motion sensors, Bluetooth, and Virtual Reality (VR), into their products, as part of the efforts to cement their position in the market.

Latin America is anticipated to witness rapid growth, exhibiting the highest CAGR of more than 6% from 2021 to 2028. Fierce competition among the regional internet service providers has resulted in high internet speeds across the region. At the same time, several government-approved digitization projects have also triggered the demand for advanced set top boxes. Initiatives being pursued by various governments for the complete digitization of Pay TV services and a paradigm shift in media consumption preference in the wake of the outbreak of the COVID-19 pandemic are some of the other vital factors that are expected to drive the growth of the market over the forecast period.

The vendors are introducing Artificial Intelligence (AI) in set top boxes to provide personalized services, cut the backend server costs, reduce human interference, and utilize the available bandwidth effectively. They are also integrating voice recognition technology for channel control, issuing other commands for services, including weather and music, and enhancing digital signal strength. At present, market incumbents are aggressively focusing on integrating AI and voice interfaces within STBs while ensuring a sleek design. For instance, in August 2019, SK Broadband, Inc., a telecom company based in South Korea, launched AI 2 Set-top Box with AI assistance, stereo speaker, and voice recognition technology. IPTV set top box providers are also investing aggressively in technological innovations to cope with the continued transition from traditional TV to OTT platforms and are subsequently promoting service providers to enhance their service offerings. Some of the prominent players in the global set top box market are:

This report forecasts revenue and volume growth at the global, regional, and country levels and provides an analysis of the latest industry trends in each of the sub-segments from 2016 to 2028. For this study, Grand View Research has segmented the global set top box market report based on product, content quality, and region:

How big is the set-top box market?

What is the set-top box market growth?

Which segment accounted for the largest set-top box market share?

b. The cable STBs dominated the set-top box market in 2020, accounting for over 25.0% of the demand that year, and are expected to retain their dominance till 2028 as well.

Who are the key players in the set-top box market?

What are the factors driving the set-top box market?

b. Key factors that are driving the STB market growth include the rising adoption of internet and broadband services coupled with the widespread availability of on-demand video services and HD channels.

b. The HD and Full HD segment is anticipated to dominate the STB market with a volume and revenue share of more than 90% over the forecast period.

Which region dominated the global market for the set-top boxes?

b. The Asia Pacific region accounted for the largest share of over 40% in the STB market in 2020 and is expected to continue dominating the market over the forecast period.