The global thermic fluids market size was USD 2.48 billion in 2018. Thermic fluids have various applications in a number of processes across various industries. These fluids are required to maintain the temperature of the processing machines and carry the heat energy which is produced during the process.

Combined with thermal storage, CSP has the advantage of storing the energy that can be used even if the clouds block the sun and also after sunset to generate electricity. CSP plants with storage of six hours can add capacity and operational value of USD 35.80/MWh compared to PV. Some of the plants have incorporated thermal systems already which are expected to grow in the future. As the global energy landscape is rapidly developing, the CSP industry is witnessing significant growth leading to an increase in demand for thermic fluids. Increasing applications of CSP and its competitive advantages over other renewable energy sources are responsible for CSP’s attractiveness.

The U.S. and Spain are leading with the rapid development of CSP projects at present and are expected to grow in the near future due to increasing investment in the region. Spain with the advantages of resources coupled with a favorable policy framework in the region has reached a capacity of 2.3GW in 2013.

The volatility in raw material prices is expected to have a negative impact on market growth. The thermic fluids are majorly manufactured from mineral oils, aromatics, and glycols derived from crude oil derivatives. The fluctuating global crude oil index is expected to force manufactures to practice contract pricing to ensure an efficient supply of raw materials.

Minerals oils emerged as the leading product segment and accounted for 41.7% of total market volume in 2013. Mineral oils are usually lightly refined and need the least additives to protect from corrosion. However, glycol-based thermic fluids are expected to be the fastest-growing product segment at an estimated CAGR of 7.9% from 2014 to 2020. Glycol thermic fluids are best suited for low-temperature applications up to -50o C. Glycol thermic fluids require additives such as inhibitors for protection from corrosion and longer life of the fluid. With increasing advantages over other types, the demand for glycol-based thermic fluids is expected to grow in the near future.

Some of the major application segments described in this report include oil & gas, chemical industry, concentrated solar power (CSP), food & beverages, plastics, pharmaceuticals, and HVAC among others. The oil & gas industry emerged as the leading consuming industry for thermic fluids and accounted for 24.1% of total market volume in 2013. Oil & gas was followed by CSP which accounted for 14.5% of total volume in 2013. In addition to being the second largest application market, CSP is expected to be the fastest-growing application market for thermic fluids at an estimated CAGR of 8.5% from 2014 to 2020. Regulatory support for food-grade thermic fluids is expected to push its demand in the food & beverage industry over the next six years.

Europe was the leading consumer of thermic fluids which accounted for 33.9% of total market volume in 2013. Europe was followed by North America and Asia Pacific both in terms of volume consumed and revenue. However, Asia Pacific is expected to be the fastest-growing regional market for thermic fluids at an estimated CAGR of 6.9% from 2014 to 2020. Growth from major end-use industries such as Oil & gas, chemical, food & beverages, and CSP mainly in China and India is expected to boost the regional market. 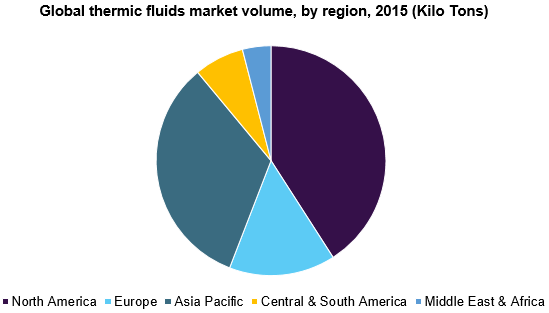 The global market for thermic fluids is highly concentrated with the top four companies including Dow Chemical Company, Solutia Inc., ExxonMobil, and Shell Chemicals accounting for over 60% of the total market in 2013. Other companies operating in the global market include British Petroleum, Paratherm, Chevron Corporation, BASF, Dynalene Inc, Multitherm LLC, and Kost USA Inc. among some other companies.