The shift in trend to replace PVC (polyvinyl chloride) owing to growing environmental concerns in major end-use industries such as automotive and construction around the world has been boosting the demand for TPOs (thermoplastic polyolefins) in the recent past. PVC contains phthalates, which are considered to be harmful to the environment. TPOs represent a member of a large group of thermoplastic elastomers (TPEs). TPOs just like other members of TPE family including TPV, TPU, etc. have rubber-like properties but a process like polymers which makes them highly suitable for high performance applications in a variety of end-use industries. Advancements in terms of functionalities such as abrasion resistance, economical, durability, lightweight, antioxidants & UV light stabilizer to resist solar UV radiation and oxidation will make the product highly preferable in regions of extreme weather conditions.

Ethylene and propylene are the two main products in the polymers industry. Crude oil prices volatility arising from several geopolitical factors might hamper thermoplastic polyolefins market price trend. In 2015, ethylene observed a sharp price rise despite a decline in crude oil prices. This trend can be due to robust demand from petrochemical products leading to tightening supply-demand scenario. TPO manufacturing process makes use of various other reinforcing polymers and rubber. 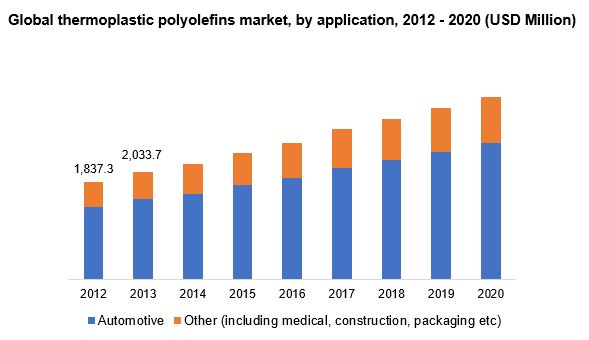 Compared to other TPE members, TPOs are relatively at a lower end of price linked performance. TPOs just like other TPEs can be fabricated using standard technologies including injection molding, extrusion, blow molding, and calendaring. The global market for TPOs saw a decline in demand during the recession of 2008-2009, however, owing to recovery in the automotive industry around the world, the demand for TPOs showed improvements. Automotive represents the largest end-use industry for TPOs, and the growth of the automotive industry is directly proportional to the growth of the global TPOs market.

Major automobile manufacturers from the West have been shifting/opening the manufacturing bases in low-cost countries such as China, India, and Brazil in order to gain an advantage in markets with huge potentials. The growing automobile market in these countries is expected to drive the market for TPOs over the forecast period. However, volatility in raw material prices has been putting pressure on profit margins of producers, which have been further inhibiting the market growth.

The automotive industry is a key segment in the application of TPOs. The automotive industry dominates the application market in terms of volume and revenue. Automotive emerged as the leading application segment and accounted for 75.5% of the total market volume in 2013. This is expected to grow at an estimated CAGR of 6.6% from 2014 to 2020. Major automotive component manufacturers include South Korea, Germany, and Japan followed by Mexico. Key automotive manufacturers like Audi, Kia, and American Ford have already announced construction plans for production plants in Mexico. Other applications of TPO include film & sheet, molds, fibers & tapes in the packaging, construction, and medical sectors. 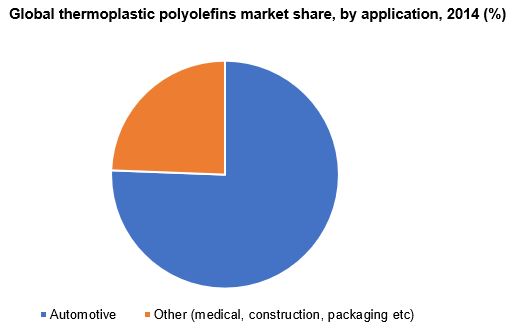 The TPO market in 2013 was dominated by North America in terms of volume with about 37%. It is followed by the Asia Pacific region with 35% of the market share. Asia Pacific is expected to be the fastest growing market for TPO at an estimated CAGR of 7% from 2014 to 2020. This can be attributed to the growing automotive markets in the emerging economies of China and India. Europe volume share is estimated to grow at a slower pace with the slowest CAGR of 5.9% due to its saturated markets. However, strict automotive fuel efficiency regulation will propel the market demand across the region. The usage of thermoplastic polyolefin in the automotive sector reduces the overall weight of the vehicle and enhances its fuel efficiency. Moreover, the presence of top automotive OEMs such as BMW, Audi, Mercedes Benz in Germany, will increase the application scope for thermoplastic polyolefins.

Industry participants are indulging in strategies such as new product development, regional expansion, and mergers & acquisitions to enhance their foothold in the market. For instance, Mitsubishi Chemicals developed ZELAS, which is an olefin-based high-performance thermoplastic with high rubber content. The product finds application in the automotive exterior and interior parts, construction materials, and medical sector. In 2016, SABIC announced affiliation with ExxonMobil Chemicals Co. regarding construction of a petrochemicals & derivative complex with polyolefins in Texas.

This report forecasts revenue and revenue growth at global, regional & country levels and provides an analysis on the industry trends in each of the sub-segments from 2015 to 2020. For this study, Grand View Research has segmented the global thermoplastic polyolefins market on the basis of product, and region.