The global tobacco packaging market size was valued at USD 17.2 billion in 2018 and is anticipated to expand at a CAGR of 3.3% over the forecast period. The rise in global cigarette consumption is expected to increase the demand for cigarettes, which, in turn, will fuel the market growth over the forecast period. The introduction of tobacco that is smokeless for dipping or chewing and increasing penetration of e-cigarettes are some of the significant factors driving the market worldwide.

Rising demand for cigarettes among female smokers is subsequently driving the market. An increase in workload and stress mainly in urban regions is also fueling the growth of the market. To get rid of stress, people are getting inclined towards using anti-depressants like cigarettes. 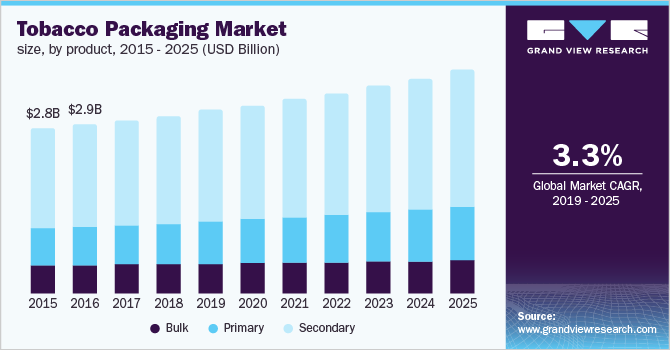 Growing per capita income and increasing consumption of tobacco products in many developing countries have driven the market. Moreover, cigarettes are one of the biggest attractions among the youth generation that may lead to a rise in its consumption. Nowadays, different technologies such as offset printing and hot-foil rotogravure and stamping have emerged for the production of tobacco packaging.

Offset printing and stamping attract many people, especially the young generation, thereby leading to market growth in the upcoming years. However, tobacco is highly carcinogenic and is one of the major factors for the increasing incidence of cancer worldwide. Owing to this, governments are taking preventive measures by imposing heavy tax and selling restrictions, thereby hampering the tobacco packaging market growth over the forecast period.

Manufacturers are focusing on innovative packaging for the convenience of the consumer.  Some of the examples of these packaging are three-sided seal bags, stand-up pouches, and shrink sleeves. Among all, flip flop packaging is the most significant form of packaging. It protects cigarettes from getting damage and is mostly used in the western markets.

According to a survey by the WHO, around 1.1 billion smokers are there in the world, out of which maximum live in low and middle-income countries, wherein tobacco-related diseases are more. To reduce the diseases related to tobacco, manufacturers are mixing green tea leaves and cloves to make herbal cigarettes, which is expected to increase the consumption of tobacco products, thereby fueling the market demand over the forecast period.

Secondary packaging generated a revenue of USD 10.4 billion in 2018 and is anticipated to witness significant growth in the upcoming years. Increasing demand for innovative cigarette boxes and rising consumption of cigarettes in social gatherings have driven the segment. Secondary packing protects not only tobacco products but also the original packing. These packagings are useful while storage, transportation, and wholesale, thereby boosting the segment growth.

Primary packaging is expected to witness the fastest growth during the forecast period owing to an increase in demand for safe and secure packaging. The main function of primary packaging is to seal the product completely and eliminate the probability of product contamination via internal/external interferences. It also serves the purpose of increasing the shelf life of the product, thereby making it desirable for prolonged consumption. An efficient primary packaging also prevents the product from getting damaged during transportation. Similar other features such as easy handling and storage are expected to positively influence the growth of this segment, thereby propelling the market growth. Primary packaging is integral to any tobacco product packaging, thereby leading to the segment growth and constant increase in the market share.

Paper box packaging held a major share of 67.8% in 2018 and is also likely to emerge as the fastest-growing segment over the forecast period. Almost all tobacco packets are made of paper boxes, thereby boosting the growth of the segment. It is found that the maximum tobacco products are packed in a paper box. This, in turn, is anticipated to fuel the demand for paper box over the forecast period. 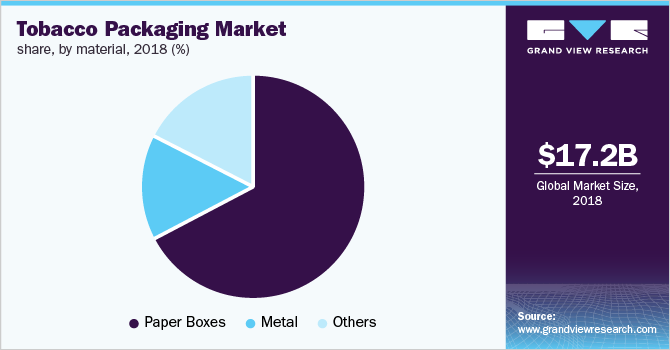 Paper boxes are widely used in the tobacco packaging industry. It is cost-effective and environmental friendly, hence increasing popularity in many areas. Paper box packaging has a protective foil or plastic that protects the cigarettes or tobacco from not getting damaged, these may lead the market to grow in the upcoming years. The paper boxes are also very low in weight and can easily be carried anywhere that may be one of the factors to drive the market. The increasing issues due to non-biodegradable or non-recyclable packaging like plastic packaging that may lead the market to grow.

As plastic causes different health diseases like skin cancer, people prefer to have paper made products. It may be one of the reasons for the growth of the market at the global level. Owing to stringent government regulations, the use of plastic is banned in many countries, so manufacturers are introducing bio-degradable packing such as jute box. This is expected to increase the demand for secondary packaging over the forecast period.

Asia Pacific emerged as the largest market with a share of 31.5% in 2018 and is likely to witness the fastest growth over the forecast period. China is found to be the largest tobacco exporter as well as a manufacturer. The country is likely to be the leading market for tobacco packaging in the world by the end of 2025 due to the increasing consumption of cigarettes and chewing tobacco. Other Asia Pacific countries like South Korea, Japan, and India are expected to witness similar growth as China by 2025. Moreover, the e-cigarette market is growing as e-cigarettes cause fewer health problems as compared to smoking tobacco.

Furthermore, other regions like Middle East and Africa are likely to witness an increased demand for the market over the forecast period due to use of water pipes or shishas. This region is expected to witness constant growth over the forecast period due to the growing trend of smoking a variety of cigarettes. Zimbabwe and South Africa are some of the countries in the Middle East and Africa, wherein tobacco production is the primary source of income. Thus, the demand for tobacco products is likely to boost the growth of the global market.

This report forecasts revenue growth at the global, regional, and country levels and provides an analysis of the latest industry trends in each of the sub-segments from 2015 to 2025. For this study, Grand View Research has segmented the global tobacco packaging market report based on product, material, and region: