The global tourniquet systems market size was valued at USD 382.3 million in 2019 and is expected to grow with a compound annual growth rate (CAGR) of 7.7% over the forecast period. The rise in geriatric population, which is highly susceptible to orthopedic conditions, coupled with increasing patient awareness is expected to drive the growth over the forecast period. In addition, greater flexibility and reliability of tourniquet systems has led to increasing demand for cuffs in recent years, hence increasing the application of such devices effectively. 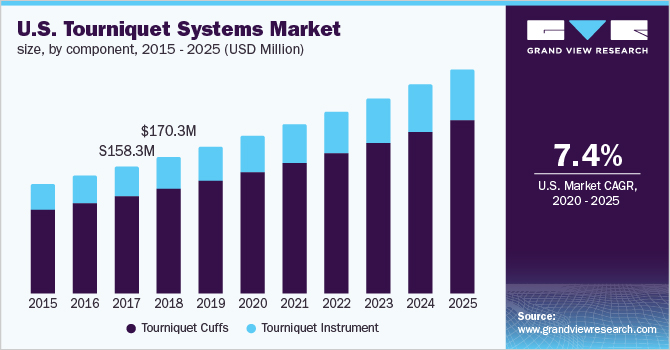 In hospitals, tourniquets are specifically used during orthopedic surgeries, where external hemorrhage cannot be controlled by direct pressure. In addition, the device is also used during emergencies and lifeâ€threatening limb hemorrhages or limb amputation with multiple bleeding points, for immediate management of breathing & airway problems. However, restraints such as the transmission of infection due to reusable cuffs might consequently increase the hospital costs and hinder the growth of the market during the forecast period.

In developing countries such as India, Mexico, and Brazil, governments are continuously investing a huge amount of funds to improve hospital care. Increasing number of accidents, rising prevalence of orthopedic injuries, and rapid growth in foreign investments in developing nations of Asia Pacific, Latin America, and Middle East are expected to boost the tourniquet systems market growth in these regions.

Spike in the various kinds of accidents such as falls, road, and industrial accidents etc. cause more number of patients to be admitted to the hospitals, which in turn is causing more use of tourniquets in cases of emergency admissions.

The increase in the competition is causing technological advancement in the products as more and more companies are improving and focusing in research and development to make them at par with the competitors.  As a result of which this environment is behaving as a driver for the boost in CAGR in the recent years.

The hospitals and other healthcare facilities have become more accessible and affordable to the public such that it is creating a positive impact on hospital admission and hence increase in access to the healthcare facilities. Similarly, there is a boost in the economy in the recent years which is contributing to the fact that the average income of the people around the globe has increased.

The responsibility of FDA is to ensure GMP in supply, storage, and packaging of tourniquets so that the safety of the patients is maintained without hampering the efficacy of the products. Other than FDA, there are other regulatory bodies that help in regulating the norms such as public health systems, state and local health departments and medical device manufacturers.

For tourniquet products that are used in accident situations and are, reusable there is always a risk of infection which can cause threat to human life. The infection may be caused due to cross contamination during surgical procedure, non- sterilized equipment’s, maintaining unhygienic conditions during reusing of tourniquets.

Tourniquet cuffs dominated the overall space in 2016 owing to their growing applications in orthopedics, trauma, and emergency settings. Tourniquet cuffs are also available in various sizes, hence, they can be used in a number of orthopedic surgeries.

The pneumatic cuffs segment occupied the largest share in 2016. The segment is also expected to grow at the highest CAGR during the forecast period as pneumatic cuffs provide a standardized pressure that can be easily controlled and the compression is independent of the position and strength of the medical expert’s hand.

The global demand for tourniquets has seen a paradigm shift due to rising awareness amongst consumers. The hospital segment accounted for more than 42% of the total revenue share in 2016. Tourniquet systems are being used extensively as an essential tool for the management of lifeâ€threatening external hemorrhage caused due to lower limb injury.

In addition, the noninstitutional application segment is expected to witness the highest growth from 2017 to 2025 due to the increasing application of tourniquets in military settings and war sites. Limb hemorrhages are one of the most common injuries caused by military wars. According to the National Center for Biotechnology Information, “point of significant hemorrhage from limb is not peripherally accessible due to entrapment” (during times when simple methods of hemorrhage control such as direct pressure cannot be adopted. In such cases, tourniquets can prove to be lifesaving without resulting in complications. 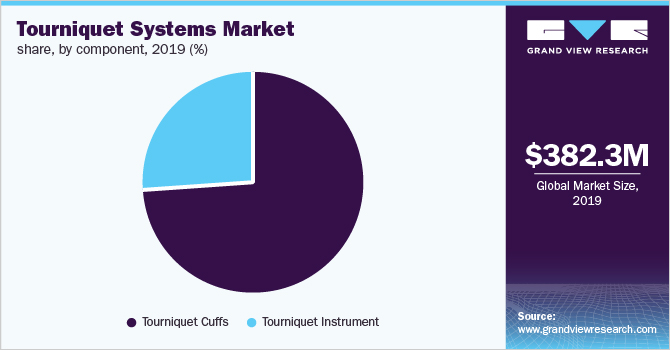 North America dominated the tourniquet industry with the largest revenue share in 2016. The dominance of this region is mainly attributed to factors such as the presence of well-established healthcare infrastructure, large target population, and the high adoption rate of technologically advanced systems.

As published by Newspaper USA Today, that the American Doctors are encouraging the generic public, cops, fire-fighters to be trained for quick techniques for stopping bleeding in case of road, rail or fire injuries or any other kind of emergency thereby increase in the tourniquet use.

Germany affirms to be one of the most dynamic and powerful economies of the world where the investment and business liberty is substantial. It has the largest medical device market in Europe and ranks 3rd in the world. It has evidently popularized and accepted invention in technologies gaining high market share in the medical device sector. 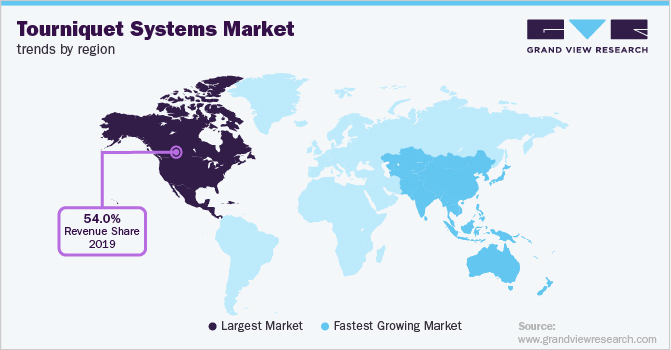 On the other hand, Asia Pacific was the fastest-growing region and accounted for around 16% of the total revenue in 2016. Emerging economies in the region including India, Thailand, and Indonesia have been experiencing strong economic growth. Growing population and an increasing number of major falls & road accidents have spurred the demand for tourniquet systems in the region. The Asia Pacific region will also benefit from the growing number of hospitals and laboratory settings, wherein the application of the tourniquet system is maximum.

The global tourniquet system sector is highly competitive and fairly concentrated, with a few companies accounting for the maximum share of the global market in 2015. Some of the major companies are Delfi Medical, Zimmer Biomet, Hammarplast Medical AB, VBM Medizintechnik GmbH, Stryker, Ulrich Medical, and Rudolf Riester GmbH.

However, some of the new entrants are expected to witness greater developments with better product offerings and technological advancements in the near future due to frequent mergers & acquisitions being undertaken as an attempt to maximize their share, which would eventually lead to greater market revenue.

This report forecasts revenue growth at global, regional & country levels and provides an analysis of the industry trends in each of the sub-segments from 2014 to 2025. For the purpose of this study, Grand View Research has segmented the global tourniquet systems market on the basis of component, application, and region: 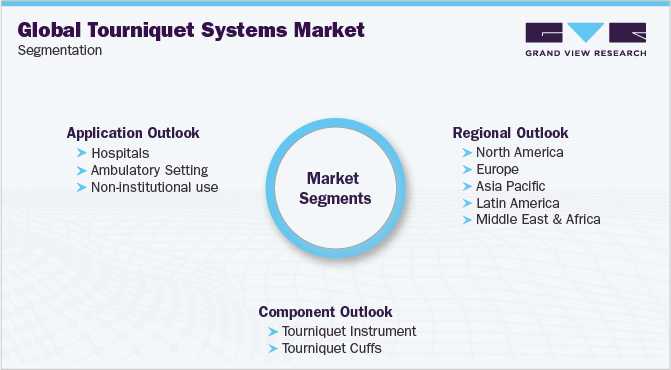 How big is the tourniquet systems market?

b. The global Tourniquet Systems market size was estimated at USD 401 million in 2019 and is expected to reach USD 433 million in 2020.

What is the tourniquet systems market growth?

Which segment accounted for the largest tourniquet systems market share?

b. In terms of application area, Hopitals dominated the Tourniquet Systems market with a share of 42% in 2019. This is attributable to rising incidence of road accidents that require tourniquet systems to manage a life threatening injury.

Who are the key players in tourniquet systems market?

What are the factors driving the tourniquet systems market?

b. Key factors that are driving the market growth include rise in geriatric population, which is highly susceptible to orthopedic conditions, increasing patient awareness, greater flexibility, and reliability of latest innovative tourniquet systems.