The global train market size was valued at USD 66.4 billion in 2021 and is expected to expand at a compound annual growth rate (CAGR) 3.8% from 2022 to 2028. Technological developments and expansion of rail network across the world are the major drivers to the train market. Developments in high speed rail technology such as magnetic levitation and hyperloop, hydrogen fuel cell technology for zero emission etc. are expected to propel the global train market growth. 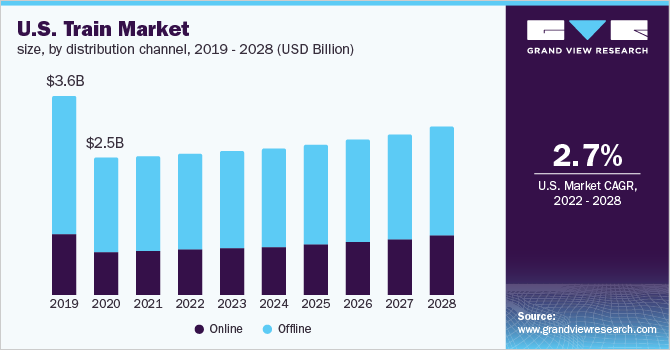 Government initiatives to expand the long-distance rail networks across the world and improve public transportation systems are likely to drive the train market growth. For instance, Rail Baltica Project integrates Baltic States into European rail networks and acts as a catalyst for the economic corridor in Northeastern Europe, providing passenger and freight services.

The global outbreak of COVID-19 across the world had a negative impact on the global train market. Due to the imposition of lockdowns and restrictions, long-distance or intercity travel for business or tourism was banned. Passenger travel by rail declined by 30.0%, globally, in 2020 as compared with 2019. Slow and steady recovery is expected in the coming years due to the increased vaccination and relaxed regulations, amid uncertainty due to the new strain emergences.

Factors such as increasing the budget for railway development and rising demand for safe, reliable, and efficient transportation systems are driving the growth of this target market. Furthermore, increasing the use of public transportation services as a solution to reduce traffic congestion is expected to drive market growth. Furthermore, improvements in infrastructure within developing countries and increased mining and industrial activities provide significant growth opportunities for the players operating in the global market.

Increasing investment in the analytics systems by network operators in developed regions along with advancements targeted towards the enhancement of customer experience act as a major driving factor for the growth of the global train market. Smart solutions such as advanced vehicle control systems, advanced PIS, and various other systems provide information about the vehicle's real-time location, which can be used to monitor schedule compliance and provide passengers with information about the location of vehicles in transit. Providing passengers with accurate real-time information on the status and location of in-transit vehicles is expected to increase satisfaction.

Furthermore, the development of new fuel technologies and the use of hydrogen or solar panels for more sustainable solutions present lucrative opportunities for market players, during the forecast period. For instance, in 2021, Alstom, the UK's leading train manufacturer and maintenance supplier, and Eversholt Rail, the UK's leading train owner, and financier, signed a memorandum of understanding to deliver the UK's first new fleet of hydrogen-powered trains.

The growth of the global train market is restrained by the significant development in passenger cars and air travel. The increasing affordability of passenger cars, frequent car launches, and increasing purchasing power of the consumers are fueling the car market and consequently increasing intercity travel preference for cars. Additionally, the increasing affordability of air travel and expanding aviation industry is impacting the global train market for long-distance travel.

The global train market is segmented based on the distribution channel. It is dominated by the offline channel. The offline channel occupied 69.6% revenue share of the global train market during 2021. The dominance of the offline channels is due to the lack of widespread technology and adoption of online ticketing services by the consumers as well as operators. The market is highly fragmented with disconnected non-standardized systems. Numerous medium level players are operating in the market with insufficient funding to access the cutting-edge distribution technology.

In the global train market, online segment of distribution channel is expected to witness strong growth. Online segment is likely to register a CAGR of 5.5% during the forecast period. The robust growth is facilitated by the increasing use of smartphones and rising internet penetration. Also increasing contribution of millennial and generation z in the rail travel during the coming years and their highly dependency on the online transactions is expected to drive the growth of the online distribution channel.

Asia Pacific held more than 50.0% revenue share and dominated the global market, in 2021. It is expected to show a promising growth rate during the forecast period. This is credited to the large consumer base and home to half of the world population with a majority of the percentage falling in the middle-income class, who highly prefer railway for intercity and long-distance travel. The rail network in the Asia Pacific, notably in India, China, and Japan is extensive and one of the most concentrated networks in the world. 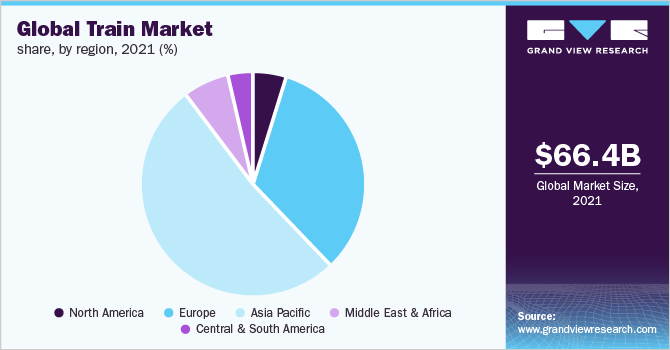 Middle East and Africa is expected to register 2nd highest growth rate during the forecast period. The region is projected to register a 4.0% CAGR from 2022 to 2028. Increasing consumer purchasing power, expansion of rail networks, and government initiatives are the factors likely to contribute the regional growth. For instance, African Union signed The African Integrated High-Speed Train Network under the “Agenda 2063” to promote the railway development in 2013. Various projects have been spearheaded by the regional body and expected to witness promising growth in the future.

The market is highly fragmented with global and medium operators playing an important role. Key companies focus on the expansion and extending rail networks to untapped areas and technological developments. Many operators are planning to phase out diesel-run trains and adopt new green technology such as fuel cell technology. Many governments are also planning to enter into the high-speed rail for long-distance train travel in Asia and Europe. For instance, China tested a maglev prototype train of high speed which is set to launch in 2025 and double its high-speed rail network in the next 15 years. Some of the prominent players in the global train market include:

This report forecasts revenue growth at global, regional, and country levels and provides an analysis of the latest industry trends in each of the sub-segments from 2017 to 2028. For this study, Grand View Research has segmented the global train market report based on the distribution channel, and region:

How big is the train market?

What is the train market growth?

Which region accounted for the largest train market share?

b. Asia Pacific dominated the train market with a share of 52.2% in 2021. This is attributable to large consumer base, expansion of rail networks, along with favorable government initiatives

Who are the key players in train market?

What are the factors driving the train market?

b. Key factors that are driving the train market growth include government initiatives to expand the long-distance rail networks across the world and improve public transportation systems.