The global transcatheter pulmonary valve market size was valued at USD 31.01 million in 2015 and is projected to grow at a CAGR of 6.0% during the forecast period. The market is mainly driven by the increasing prevalence of various cardiovascular diseases such as rheumatic heart disorders, hypertensive heart diseases, cerebrovascular diseases, and inflammatory heart diseases. The growing population with heart valve disorders and surging demand for pulmonary valve replacement are a few of the crucial factors that are expected to increase the need for transcatheter valves over the forecast period.

The technological advancement in valve replacement procedures is also amongst the few key factors that are expected to drive the industry. The growing number of product launches related to transcatheter heart valve technologies is one of the primary reasons that indicates its surging demand and adoption rate amongst the patient population. 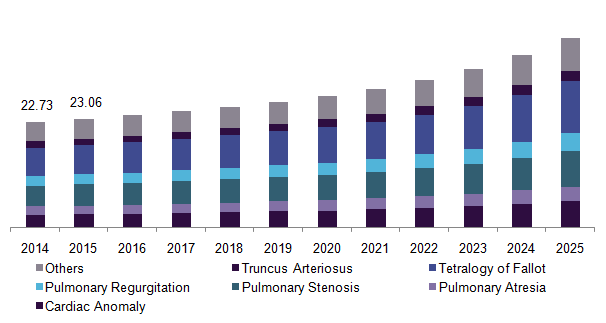 Since the technology is quite a niche, and there are only three approved devices available in the U.S., Canada, and some parts of Europe, there is no mature segment of this market. Many applications are still under the uncharted territory, which includes cardiac anomaly, atresia, and regurgitation. The aforementioned applications are expected to boost the transcatheter pulmonary valve market over the forecast period.

In 2016, the balloon-expanded transcatheter valve segment was leading the revenue share, accounting for the largest market share of approximately 65.6% in 2015. The segment held the majority of the shares due to the growing consumer adoption rate and the increasing development of new products.

Moreover, the balloon-expanded transcatheter valve is also the fastest-growing segment at a lucrative CAGR. The growing interest amongst the manufacturers in balloon-expanded technology and rising awareness regarding the accuracy and precision of the treatment result are some of the factors that are expected to support the growth over the next eight years. 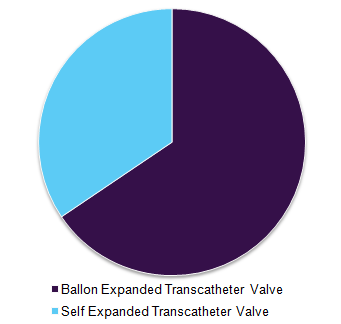 In 2015, the adult transcatheter pulmonary valve held a majority of market share owing to the presence of huge demand for medical devices amongst the adult population and increasing prevalence of disorders such as cardiac abnormalities, pulmonary stenosis, regurgitation, and tetralogy of Fallot.

However, the pediatric transcatheter pulmonary segment is expected to be the fastest-growing segment over the forecast period owing to the technological advancement in cardiac devices. The increasing number of pediatric population affected with pulmonary stenosis, atresia, tetralogy of Fallot, and other related disorders is one of the crucial factors that is expected to drive the market over the forecast period.

Moreover, the tissue-engineering segment is anticipated to grow at a faster pace as compared to synthetic transcatheter pulmonary. The presence of a huge product base of bioprosthetics & tissue valves and growing investment by the private & the public players for the development of advanced tissue-engineered heart valve to avoid the complications related to progressive degeneration are some of the factors that are anticipated to boost the industry over the coming few years. For instance, XELTIS announced that it had developed the first bioabsorbable heart valve, which received positive results in the second clinical trial.

Emerging economies such as India and China account for the majority of the medical device export across the globe. The growing demand for innovative heart valves, increasing geriatric population, rising healthcare expenditure, and rapidly developing healthcare sector are some of the factors that are expected to drive the market.

The transcatheter pulmonary valve industry is oligopolistic and is dominated by Edwards Lifesciences Corporation, Medtronic, and CryoLife. These companies are actively scouting for potential start-ups and are collaborating with different research centers for new product development.

This report forecasts revenue growth and provides an analysis of the industry trends in each of the sub-segments from 2014 to 2025. For this study, Grand View Research has segmented the global transcatheter pulmonary valve market based on application, technology, end-use, raw materials, and region: