The global urology laser market size valued at USD 890.4 million in 2018 and is expected to grow at a compound annual growth rate (CAGR) of 5.7% from 2019 to 2026. Increase in the number of patients suffering from urology-related disorders, rising preference for minimally-invasive surgeries, and technological advancements are some of the factors driving the market growth. 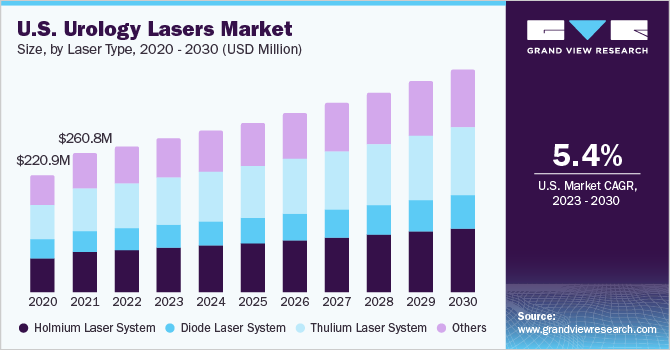 One of the major factors driving the market for urology lasers is the adoption of minimally invasive surgical techniques in holmium systems as well as thulium laser treatment systems. These systems offer several advantages such as greater effectiveness, safety, and quick recovery, which has resulted in increased demand for holmium and thulium systems. These systems have provided successful outcomes while minimizing the side effects of treatment, and offer advantages such as shorter hospital stays, quicker recovery, reduction in blood loss, and lower overall body pain as a result of smaller incisions. Thus, the effectiveness and safety characteristics of these systems are expected to drive the growth of the market.

With rising cases of urological disorders such as urolithiasis, bladder cancer, urinary calculi, and prostate diseases, the demand for urology lasers has increased significantly. Asia Pacific is anticipated to be the fastest-growing regional market over the forecast period mainly owing to the increasing number of patients with urology-related disorders. According to the National Center for Biotechnology Information (NCBI), in West Asia, Southeast Asia, South Asia, as well as some developed countries (South Korea and Japan), the prevalence of urological disorders is 5% to 19.1%.

Moreover, as per the 2018 data, West Asian males are more prone toward urinary calculi diseases due to climatic conditions such as hot temperature and significant sun exposure, and unhealthy dietary habits. In addition, according to the National Center for Biotechnology Information (NCBI), ammonium acid urate (AAU) calculi are rare urolithiasis in developed countries but are endemic in developing countries. Ammonium acid urate calculi were observed in 0.38% of Japanese patients with urinary stones.

On the basis of laser type, holmium dominated the urology laser market owing to its special modalities as well its minimally invasive surgical technique. Holmium laser is mainly used in prostate surgeries, for which a minimally invasive treatment is preferred for the removal of tissues that blocks urine flow through the prostate. The demand for holmium systems is increasing due to its safety and its effectiveness in the treatment of patients without an incision procedure. The procedure takes about 45-90 minutes depending upon the size of the prostate. Since it is a less invasive procedure, the patients get can get discharged on the same day. These factors are expected to drive the demand for urology lasers.

The thulium laser segment is expected to register the highest CAGR over the forecast period owing to its advantages over Transurethral Resection Prostate (TURP), a traditional method. Thulium laser is considered as the most effective technique for treating BPH as it offers several advantages such as lower rate of bleeding and quick as well as safe procedure requiring fewer incisions. Thulium laser has, therefore, overcome the demerits of TURP technique, which causes significant blood loss, thereby driving the product demand.

Urolithiasis is expected to be one of the fastest-growing segments over the forecast period owing to increasing number of patients suffering from stony concretions in urinary tract and bladder. Stony concretions are caused due to factors such as adoption of unhealthy lifestyles and improper sanitation facilities. One of the causes of urolithiasis is high consumption of caffeine intake, which increases urine calcium excretion and causes blood in urine and pain in the abdomen. The development of stones is related to increased excretion of stone forming components such as calcium, urate, xanthine, oxalate, cystine, and phosphate. Thus, rising number of patients suffering from kidney stones and urinary tract stones and bladder stones are expected to drive the demand for urology lasers for effective treatment. 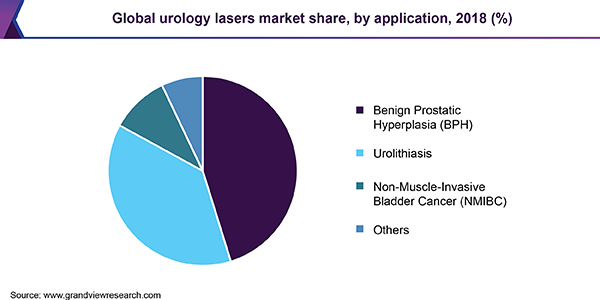 Benign Prostatic Hyperplasia (BPH) dominated the market based on application owing to its increasing prevalence. It is most prevalent among African males because of the androgen receptor expression, high testosterone levels, and 5-alpha-reductase activity. BPH mainly occurs in two main growth cycles during a man’s life: early puberty and at around 25 years of age. Thus, the increasing prevalence of BPH in men is expected to significantly contribute to the growth of the market.

North America dominated the overall market in 2018 and is expected to witness substantial growth in the future due to increasing prevalence of BPH, urolithiasis, and other urology-related disorders. According to the NCBI, currently, 50% of the patients in the U.S. are suffering from urolithiasis due to calcium and fluid intake, which plays a major role in the formation of urinary stones. Technological advancements in urology laser equipment play a vital role in driving the demand for urology lasers. For instance, Lumenis, a urology device, offers MOSES technology, which provides technologically advanced holmium laser lithotripsy and Benign Prostatic Hyperplasia (BPH) treatments. Thus, rising technical advancements in the treatment of clinical applications are driving the market growth in the region.

Asia Pacific is expected to register the highest CAGR over the forecast period due to the increasing number of people suffering from urolithiasis and the subsequent rise in lithotripsy procedures in the region. According to the NCBI, 19% of the Asian population suffers from urolithiasis, wherein males are more likely to develop this condition due to the formation of genetic mutations, dietary habits, and various climatic factors. In addition, less fluid intake, as well as climatic factors (hot temperature and high exposure to the sun), increase the risk of developing urolithiasis as well as other urology-related problems. Thus, increasing instances of urology-related conditions drives the growth of the market.

The players focus on launching innovative laparoscopic urology devices, researching technological advancements, and implementing growth strategies such as mergers and acquisitions. For instance, Boston Scientific Corporation introduced its advanced GreenLight HPS Laser Therapy System for an effective and safe treatment for urethral strictures and bladder tumors. Advancements such as these are anticipated to boost the market growth over the forecast period. Some of the prominent players in the urology laser market include:

This report forecasts revenue growth at global, regional, and country levels and provides an analysis of the latest trends in each of the sub-segments from 2015 to 2026. For the purpose of this study, Grand View Research has segmented the global urology laser market report on the basis of laser type, application, and region:

How big is the urology lasers market?

What is urology lasers market growth?

Which segment accounted for the largest urology lasers market share?

b. North America held the largest share of 32.4% in 2019 due to increasing prevalence of BPH, urolithiasis, and other urological disorder and launch of technologically advanced products by the key players in the region.

Who are the key players in urology lasers market?

What are the factors driving the urology lasers market?

b. Key factors that are driving the growth include increase in the prevalence of urological disorders and rising demand for minimally invasive surgical procedures over the forecast period.