The U.S. atherectomy devices market size was valued at USD 375.9 million in 2017 and is anticipated to expand at a CAGR of 6.6% over the forecast period. Increasing prevalence of target disease and growing preference for the minimally invasive procedure is expected to boost the market growth. Also, technological improvements about diagnosis and minimally invasive procedures for endovascular conditions resulting in reduced post-surgical complications will drive the market.

Increasing geriatric population, changing lifestyle, and rising cases of Peripheral Artery Disease (PAD) are some of the major drivers of the market. Continuous clinical trials to introduce and identify optimal interventions for treating PAD is another factor that attributes to the market growth. Higher patient satisfaction owing to fewer incision wounds, reduced hospital stays, fewer post-surgical complications, and low mortality rates are expected to boost the demand further. Moreover, easy reimbursement policies under Medicare and Medicaid are expected to boost market growth in the U.S. 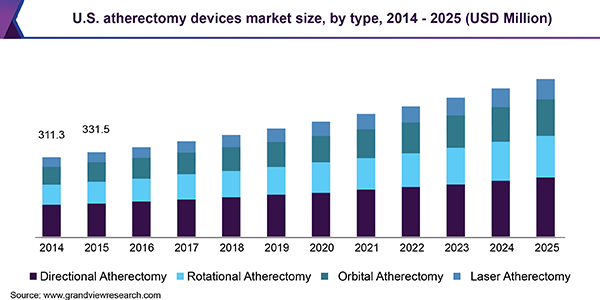 According to Elsevier Inc., there was a rise in atherectomy volume for Medicare beneficiaries to 76% by 2015. In 2008, Medicare reimbursement policy was amended to favor patients seeking treatment through outpatient settings. This change in policy also affected peripheral vascular interventions. After the changes in the federal reimbursement policy in 2006, peripheral vascular interventions are categorized under outpatient settings. This is comparatively less expensive than an inpatient setting and has increased the adoption of atherectomy procedures, thereby supporting the market growth.

Furthermore, strategies, such as joint ventures, M&As, and product launches and approvals, undertaken by prominent companies are likely to contribute to the market expansion during the forecast period. For instance, in August 2017, Koninklijke Philips N.V. acquired Spectranetics to expand its business in therapy devices to deliver enhanced care to patients. In December 2016, Avinger received FDA clearance for its innovative PAD solution, Lightbox L250 imaging console. The software was made available to all the existing users of L250 without additional costs and would be incorporated in all future products.

Based on type, the market is segmented into directional, rotational, orbital, and laser atherectomy. Directional devices dominated the market due to certain advantages such as improved efficacy, low treatment cost, minimally invasive nature of the procedure, and low recurrence of the disease. Around 19 million people suffer from peripheral artery diseases (PAD) in the U.S., which leads to an annual economic turnaround of USD 290 billion. The concern of having a permanent implant in the body shifts preference of patients to atherectomy. Furthermore, the recurrence of stenosis/restenosis is a major problem in cardiovascular patients. Lack of effective treatment for the same compels interventional surgeons to seek alternative methods for removal of lesions and plaque, such as atherectomy.

Based on end-use, the market is segmented into an in-patient facility, Office-Based Labs (OBLs), and out-patient facility. The OBLs segment led the market and is expected to register the fastest CAGR during the forecast period due to the development of minimally invasive surgical techniques, easy reimbursement, and increased convenience, safety, efficacy, and patient satisfaction. 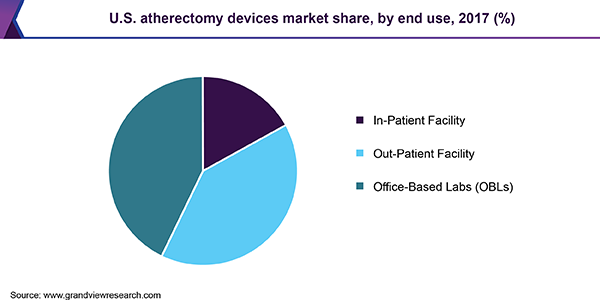 Rising prevalence of lifestyle disorders and Cardiovascular Diseases (CVDs), such as ischemic heart disease, cerebrovascular disease, rheumatic heart disease, and peripheral arterial disease, is anticipated to boost the market. According to the American Heart Association, Inc., by 2035, there will be more than 130 million cases of CVDs in the U.S. and the total cost of treatment will reach USD 1.1 trillion. According to Piedmont Heart Institute, 500,000 Coronary Artery Bypass Grafting (CABG) surgeries are performed each year in the U.S.

Medtronic and St. Jude Medical was the major companies in 2018. Growth in net sales of Medtronic was due to the launch of the HawkOne 6-a directional atherectomy system-in the third quarter of 2017. Other key market contributors are Spectranetics; Cardinal Health; and Cardiovascular Systems, Inc. As of June 2017, Cardiovascular Systems, Inc. sold over 292,000 Peripheral OAS across the country and represented 69% of the revenue. It can also be considered as a strong emerging company as it is currently the only manufacturer of orbital atherectomy device-Diamondback 360 Peripheral.

Boston Scientific Corp. is another key industry participant, which is undertaking strategies, such as M&As to strengthen the market position. For instance, in November 2018, the company acquired BTG plc and its key business including several peripheral interventional product lines. This acquisition is anticipated to help the company expand its peripheral interventional portfolio. Moreover, in August 2018, it acquired VENITI, Inc. to commercialize the VICI VENOUS STENT System used in the treatment of venous obstructive disease.

This report forecasts revenue and volume growth at a country level and provides an analysis of the latest industry trends in each of the sub-segments from 2014 to 2025. For this study, Grand View Research has segmented the U.S. atherectomy devices market report based on the type and end-use: