The U.S. burial insurance market size was estimated at USD 65.74 billion in 2021 and is expected to expand at a compound annual growth rate (CAGR) of 3.6% from 2022 to 2030. The demand for funeral services and their associated expenses is expanding as a result of people's increasing awareness of the need to “make wise decisions today for peace of mind tomorrow”. This trend is primarily supported by the fact that prices for many products and services are rising quickly, and while funeral costs are rising as well, but are not doing so at a rate that is keeping up with inflation. Moreover, even though funeral costs are not rising at the same rate as inflation, they have increased significantly in recent years. 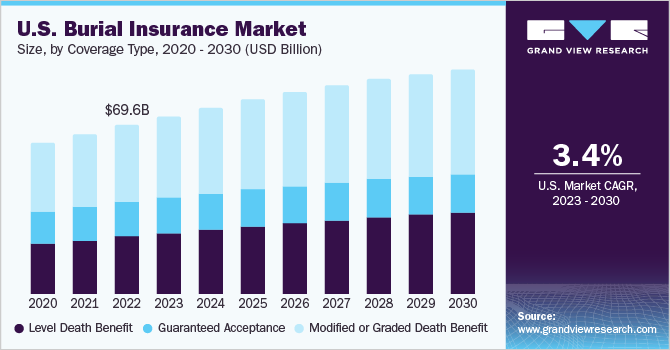 For instance, the 2021 National Funeral Directors Association (NFDA) Member General Price List Study found that while the median cost of a funeral climbed by 11.3 % to USD 6,970 over the previous five years, the cost of a funeral with cremation increased by just 6.6% to USD 7,848. For the same period, the total inflation rate was 13.98 %. 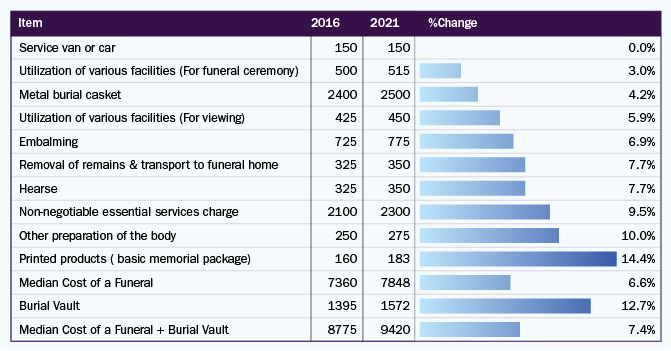 Furthermore, the market for burial insurance as a whole is benefiting from the growth of the health insurance sector, including the increase in digitalization and internet use.

Surviving loved ones frequently feel financial hardships during a period of intense grief since they have no way to cover these costs. This, combined with the COVID-19 pandemic, has drawn the attention of governments, and thus, from April 2021, FEMA begin to reimburse funeral costs up to USD 9,000, or about the average cost of a funeral. This will raise public awareness of funeral costs and spur increased government action, which will bring viewers to health insurers and boost the market during the forecast period.

In addition, noteworthy government initiatives and related acts have been put in place, such as the Affordable Care Act, to ensure that everyone receives acceptable comprehensive coverage regardless of their circumstances.

Additionally, according to a press release from the White House, US President Joe Biden stated on April 5, 2022, that his administration plans to expand the Affordable Care Act (ACA) to improve access to coverage and reduce costs, potentially raising the percentage of Americans who are insured. As a result, more Americans may decide to have their health insurance cover funeral costs, resulting in rising demand for burial insurance during the forecast period.

Based on the age of the end-user, the market is segmented into four types - over 50, over 60, over 70, and over 80. One of the main determinants of how much a policy would cost is age. Senior policyholders in particular start looking for plans that tend to cover all parts of expenses, including burial fees, because funeral prices are often greater in the U.S. and can burden families when loved ones pass away. Therefore, incorporating a payment for funeral costs in insurance plans benefits both the individual policyholder and their family substantially.

The U.S. Census Bureau's International Database for Population by Age for the U.S. revealed that individuals between the ages of 60 and 69 are significantly more common than individuals in other older age categories. This shows that people in that age group may be more inclined to choose these sorts of policies since the U.S. is one of the more developed and health-conscious nations, where people are typically aware of their health status and the benefits of health insurance. As a result, the segment of people aged over 60 and over 70 is dominating the market and is expected to maintain its dominance throughout the forecast period.

Most last expenditure life insurance plans don't need a medical check, regardless of age. Based on coverage type, the market is segmented into three types - level death benefit, guaranteed acceptance, and modified or graded death benefit. 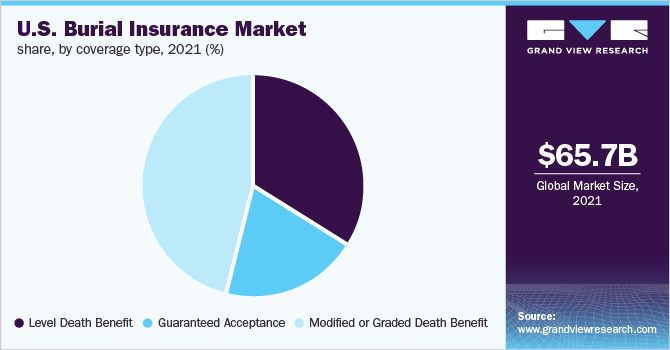 A level death benefit option in an insurance policy guarantees coverage that immediately pays out the whole death benefit. Whether the insured individual dies in the first or last years of the policy's term, doesn't matter. Additionally, this is the only form of final cost insurance that offers the insured full and immediate pay. Consumer adoption of level-depth benefit plans, which would expand quickly owing to the similarly low rates, would be the segment's primary growth driver. 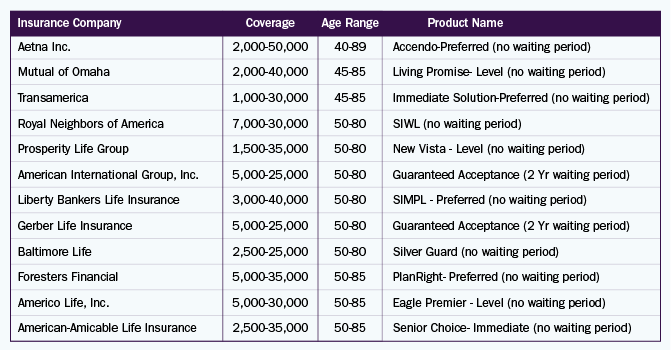 The modified or graded death benefit segment held the largest revenue share of over 46% in 2021. Modified or graded death benefits have disadvantages as do other insurance plans, but they are still an option for people with a variety of health problems because the insurance industry is exposed to substantial risk by excluding any medical examination and associated tests. It is also anticipated that this segment will grow throughout the projection period, driven by a rise in the number of people who have serious illnesses preferring to buy such plans that also cover funeral costs.

Because several insurance companies provide integrated health, life, and death insurance, in 2021, California, New York, and Texas owned the largest shares of the entire United States. Additionally, the Affordable Care Act in the US mandates the need for comprehensive coverage, which will act as one of the major drivers for the US industry and assist the market's growth throughout the course of the forecast period. As a result of the market's development, more providers are attempting to break into it by broadening its geographic reach and offering policies to a larger population. One such current market strategy is expanding the Online Sales Strategy.

Strategic initiatives by key players, such as collaborations, acquisitions, and partnerships with emerging players also contribute to market growth. For instance, in an agreement with Sixth Street subsidiaries Talcott Resolution Life Insurance Company and Resolution Life, Allianz Life will reinsure a portfolio of fixed index annuities worth USD 35 billion on December 3, 2021. The transaction is in line with the Allianz Group's goal to improve balance sheet capital management to increase synergies with its wealth management business and build value in its life insurance firm. 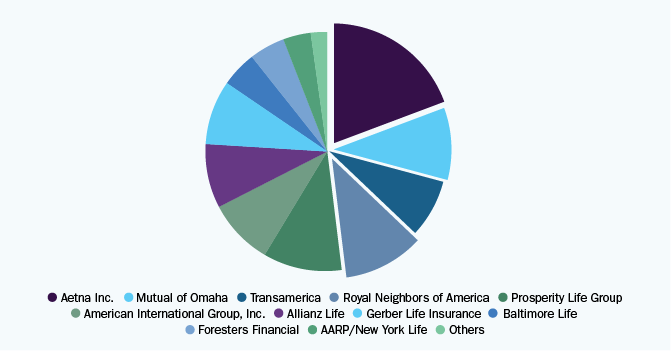 Some of the prominent players in the U.S. burial insurance market include:

This report forecasts revenue growth at the country level and provides an analysis of the latest industry trends in each of the sub-segments from 2017 to 2030. For this study, Grand View Research has segmented the U.S. burial insurance market report based on coverage type, age of end-user, and state: 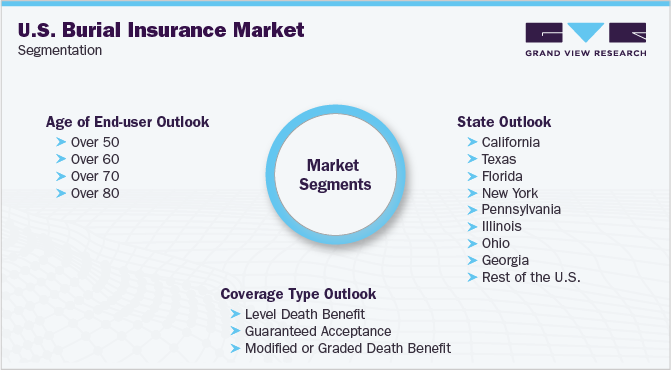 How big is the U.S. burial insurance market?

What is the U.S. burial insurance market growth?

b. The Modified or Graded Death Benefit coverage type segment in the U.S. burial insurance market accounted for 45.71% of the overall revenue in 2021 driven by a rise in the number of people who have serious illnesses preferring to buy such plans that also cover funeral costs.

Who are the key players in the U.S. burial insurance market?

What are the factors driving the U.S. burial insurance market?

b. Key factors that are driving the U.S. burial insurance market growth include the growing aging population and digitization, growing awareness of funeral insurance, the rising cost of funeral expenditure, and growing competition and related collaboration to bring in a better product for the policy seekers.