The U.S. cannabinoids market size was valued at USD 14.6 billion in 2021 and is expected to expand at a compound annual growth rate (CAGR) of 16.2% from 2021 to 2030. Factors, such as the rising number of consumers opting for cannabinoid-based products and increasing awareness concerning cannabis and cannabinoid products drive the market growth. The utilization of cannabinoids for different medical conditions has gained momentum in the country in recent years. Affirmative government regulations about cannabinoids have proven to be beneficial in increasing the number of players entering the market. Furthermore, the rising demand for minor and major cannabinoids and positive research carried out for claiming their benefits in various health conditions have helped boost awareness about cannabinoid use. However, the high production and extraction costs, mainly concerning minor cannabinoids, are expected to hinder the market growth. 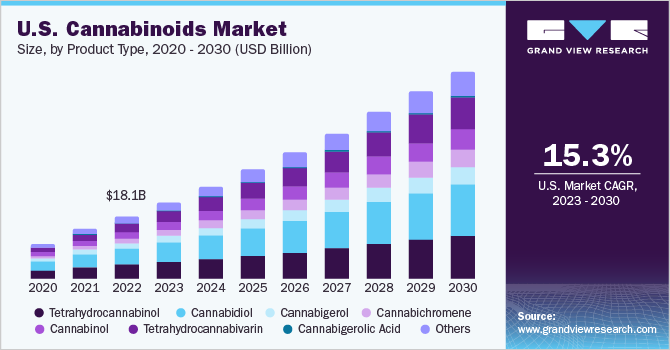 Furthermore, shifting in the adoption trend towards cannabinoid-based products from traditional medicines due to positive health benefits provided by them in certain health conditions is a pioneering factor boosting the market growth. Growing research investigating the impact of cannabinoids on conditions such as epilepsy, cancer, chronic pain, arthritis, metabolic issues, and neurological disorders is further bolstering the growth. For instance, as per a survey quoted in an article published in Life Beyond Numbers in 2020, around 42% of the consumers using CBD stopped using traditional medications and preferred CBD products.

In addition, the growing demand for cannabinoid products in the country, coupled with increasing sales of cannabinoid products is yet another factor supporting the growth. The growth can be signified through an increase in retail sales, online sales as well as internet searches for cannabis and related products. For instance, as per a 2019 research provided by Jama Network, the web searches for CBD increased from 125.9% from 2016 to 2017 to 160.4% from 2017 to 2018.

With the advent of sanctioning of the Farm bill in 2018, various opportunities were created in the market owing to the legalization of CBD and THC (in some states). This legalization has led to the opening of the country’s market for major companies to enter and establish their foothold. It is further positively impacting the market growth. In addition, post-legalization, an upsurge in dispensary, manufacturing, and cultivation licenses has further promoted market growth. For instance, according to Canix, as of 2021, there are around 8550 retail cannabis licenses sanctioned in the U.S. It is a substantially high number and is anticipated to increase at a faster growth rate in the coming years.

Moreover, the high price of cannabinoid products and the expensive extraction process are some of the factors impeding the market growth. Minor cannabinoids, found in very few quantities in the cannabis plant, are difficult to extract and require a higher amount of biomass. For instance, CBD accounts for around 20% of the total cannabis plant, as compared to CBG which accounts for approximately 1%. Hence, around 20x biomass is required for extracting the same quantities of CBG as compared to CBD. It thus hampers the market growth. However, due to the rising popularity of minor cannabinoids, coupled with the increasing adoption of major cannabinoids such as CBD and THC, players are anticipated to increase production, thereby reducing the hurdle in the forthcoming years.

In addition, the COVID-19 pandemic has significantly impacted the cannabis industry. Nationwide lockdowns and disruptions in the supply chain during the pandemic have led to a reduction in revenue generation. In addition, the reduction in production and manufacturing of cannabinoid-based products along with panic buying scenarios in the country in the initial months of the pandemic are some of the other factors that impacted the U.S. cannabinoids market during the pandemic.

Cannabidiol (CBD) dominated the market with a revenue share of 27.2% in 2021. This high share is attributable to the rising adoption of CBD for various applications such as metabolic disorders, epilepsy, neurological disorders, arthritis, Alzheimer’s disease, diabetes, and pain management. In addition, rising strategic initiatives in the form of product launch, clinical trials, and rising cultivation of CBD-rich cultivars by cultivators in the country are further increasing the penetration and adoption of CBD products. Such initiatives signify growing demand, thereby boosting the market growth. 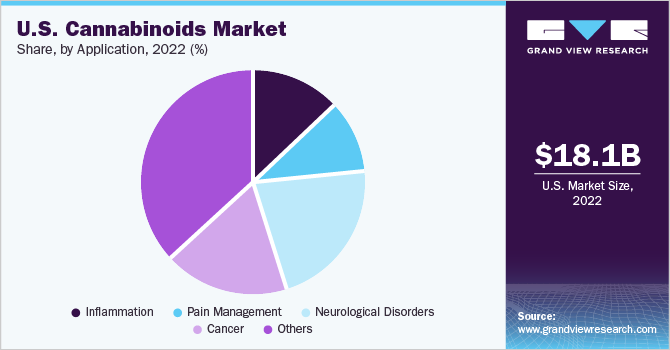 Tetrahydrocannabivarin (THCV) is anticipated to expand at the fastest CAGR of 18.4% during the forecast period. This growth is attributable to rising awareness with regards to the benefits of THCV for a few medical conditions, such as metabolic disorders, pain management, and diabetes. In addition, an increase in the number of players aiming at the production of THCV is further projected to fuel the market growth.

Furthermore, strategic alliances with other market players in the form of product launches, mergers and acquisitions, production scale-up, collaborations, and partnerships, as well as increasing R&D in the field of cannabinoids are some of the initiatives being undertaken by key market players. In 2021, GenCanna announced the acquisition of CBD Capital Ltd. It will help in strengthening the foothold of GenCanna in the cannabis industry at the local as well as global levels. Some prominent players in the U.S. cannabinoids market include:

This report forecasts revenue growth at the country level and provides an analysis of the latest industry trends in each of the sub-segments from 2016 to 2030. For this study, Grand View Research, Inc. has segmented the U.S. cannabinoids market report based on product:

How big is the U.S. Cannabinoids market?

What is the U.S. Cannabinoids market growth?

Which segment accounted for the largest U.S. Cannabinoids market share?

b. Cannabidiol (CBD) dominated the U.S. cannabinoids market with the highest share in 2021. This is attributable to the increasing demand for cannabidiol (CBD) for medical and wellness purposes due to its healing properties.

Who are the key players in the U.S. Cannabinoids market?

What are the factors driving the U.S. Cannabinoids market?

b. Key factors driving the U.S. cannabinoids market growth include increasing awareness about the therapeutic benefits of cannabinoids, the growing legalization of cannabis and its derivatives in various countries.