The U.S. canned foods market size was estimated at USD 16.35 billion in 2017. Improvement in distribution infrastructure and the resultant increasing popularity of ready-to-eat food products, coupled with the affordability of canned foods and changing lifestyles are expected to propel the industry growth over the forecast period. 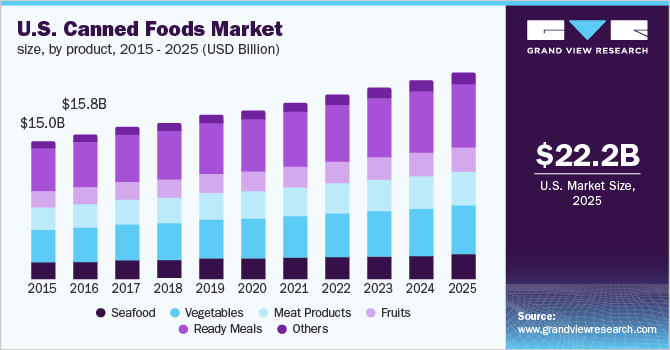 The market exhibits the presence of large players acquiring smaller entities with these players reducing prices, thus, yielding to intense competition. It is also observed that the exit barriers for canned food companies are high owing to divestment of assets and higher fixed costs of automated processes thus intensifying the rivalry among competitors.

The demand in the U.S. is estimated to be valued at USD 22.23 billion by 2025. In the U.S., sustainable farming techniques coupled with the benefits of these food products has resulted in an increase in its consumption. The various advantages of canned foods such as ease in cooking and increased shelf life are also expected to drive the market growth in the U.S.

The industry is characterized by high volume and low margin of the product. The supplier power is anticipated to be weak with canned food processing companies sourcing the input from a large number of suppliers. The retail industry is observed to be fragmented with companies selling products to small buyers.

In January 2017, “Control of Listeria monocytogenes in Ready-To-Eat Foods”, draft guidance was released by the U.S. Food and Drug Administration, which aims at preventing ready-to-eat (RTE) foods from the risk of Listeria monocytogenes (L. mono). The FDA supports ongoing efforts by government agencies and industry participants to achieve food safety across the nation.

The U.S. industry serves various product types including seafood, vegetables, meat products, fruits, ready meals, and others. Ready meals play a major role in the growth of the U.S. market on account of rising demand for convenience foods, healthy protein-rich foods, and increased awareness among the population.

The market for vegetables is contributed to the higher amounts of minerals exhibited by the product used in reduction of hypertension, osteoporosis, and others. The vegetable market has various nutritional benefits and is thus in high demand from the U.S. The segment is thus expected to progress at a CAGR of 4.0% over the forecast period.

Growing tuna consumption is expected to play a crucial role in driving market growth over the forecast period. However, the tuna market is affected by culture, tradition, education & awareness in consumers. There are certain constraints regarding harvest sustainability that is expected to hamper industry growth.

The demand for meat products is likely to rise at an estimated CAGR of 3.3% by revenue, over the forecast period. The canned meat products market is expected to grow at a steady rate owing to the growing popularity in restaurants and fast food joints as well as improved production including harvesting, processing, and canning.

The U.S. canned foods industry is anticipated to ascend at an estimated CAGR of 3.9% over the forecast period. The extensive consumption of canned foods in the U.S. is contributed to improved processing techniques and a rise in awareness among the people regarding the nutritional value of the products.

Technological development in the aquaculture method in the U.S. is anticipated to create immense market potential for the market in the near future. The aquaculture method is used for volume production over the traditional method of wild fish harvesting. Other technological innovations are observed in the fish feed industry with sustainable feed products such as algae.

The canning companies in the U.S. use aluminum as the raw material for canning instead of using tin for its enhanced heat processing capacity. The dominant position of the tin plate for canned foods is changed with the introduction of aluminum alloy as it possesses hardness greater than tin and is well suited for canning.

The buyers in the industry are rising owing to the increased availability of canned foods in various varieties in online retail stores. Moreover, the growth of this market is contributed to the cheaper option available to buyers to cook the meal at home rather than going to restaurants. These factors are expected to propel the market growth over the next eight years.

The U.S. canned foods industry is characterized by the presence of a large number of regional players and is highly competitive in nature. The threat of new entrants in the industry is expected to remain low with buyers concentrating on buying from established brand names for assurance of quality.

The major players have strong brands and high-volume production facilities thus reducing the market for smaller players. In addition, the regulatory requirements and government policies are stringent, thus, increasing the threat for new entrants. Also, it is observed that the capital investment is considerable owing to the establishment of canning plants.

This report forecasts revenue and volume growth at global, regional & country levels and provides an analysis of the industry trends in each of the sub-segments from 2014 to 2025. For the purpose of this study, Grand View Research has segmented the U.S. canned foods market report on the basis of type.