The U.S. direct to consumer telehealth services market size was estimated to be USD 0.3 billion in 2016. The market is expected to witness a huge growth in terms of revenue and users in the coming years. Concerns such as accessibility issues, shortage of healthcare providers, and increasing healthcare costs have triggered the adoption of telehealth over the traditional means. 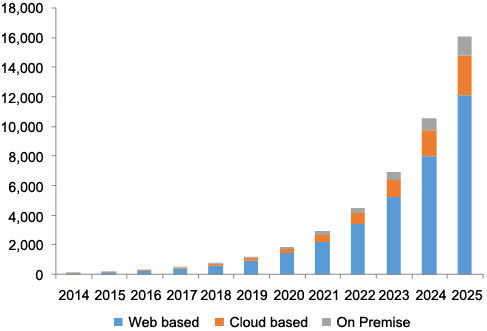 The key drivers of the market include the rising demand for centralization of healthcare administration and enhanced quality and safety by telehealth applications. Furthermore, the increasing demand for mobile technologies and the internet by people and the rising adoption of home care by patients are expected to propel the growth over the forecast period.
However, factors such as unclear reimbursement structure and difficulty in maintaining the confidentiality of patient information, are likely to hinder the growth of the market during the forecast period.

The U.S. direct to consumer market is categorized into product type and delivery mode. The product type service market is further segmented into remote monitoring, real-time interaction, and store-and-forward.

The remote monitoring segment held the majority of the market share in 2015 and is expected to witness significant growth in the near future. The growing base of geriatric population in the U.S. is expected to be a key factor driving the remote monitoring through telehealth services demand. The real-time interaction segment is anticipated to be the fastest-growing segment over the forecast period owing to the rising initiatives by the government for incorporation of telehealth projects across all states and passing of bills, which allow Physician-to-Physician (P2P) video conferencing.

The key segments of the delivery mode market are web-based, cloud-based, and on-premise delivery modes. The web-based delivery mode was estimated to lead the market in 2015 and it is expected to witness a promising growth rate over the forecast period. The cloud-based delivery mode is anticipated to be the fastest-growing segment over the study period owing to the advantages such as easier usability, limited memory requirement, and the possibility of using the system on any device. The rising investments by IT firms in cloud computing are expected to rise its demand in the near future.

The U.S. is estimated to witness lucrative growth in this industry. As of 2013, around 52 percent of hospitals offered telehealth services, whereas 10 percent of hospitals were expected to implement these services in the same year. Additionally, over 15 million people in the U.S. utilized the telehealth services in 2015, which is estimated to be 50 percent up from 2013.

The adoption of these services also varies owing to the various state policies. For instance, in 2013, the adoption rate in the Arkansas hospitals was estimated to be at around 71% whereas in Maine and South Dakota the adoption rate was around 69 percent and 70% respectively. The hospitals in Alaska accounted for the largest adoption rate of 75% in the U.S.

In the current scenario, telehealth providers cater to a majority of states in the U.S. Companies such as American Well Corporation, MDLIVE, Inc., CareClix, MD Aligne, and MeMD, Inc. have expanded their network in all the 50 states in the U.S. However, some of these companies are not present in a few states owing to the telehealth licensing issues.

Some of the major players in this industry include American Well, Teladoc, Inc., CareClix, Doctor on Demand, MD Aligne, MDLIVE, Specialists on Call, and MeMD, among others. In an attempt to ensure sustainability and register significant growth, the companies adopted several strategies such as partnerships, geographic expansions, new product development, collaborations, and acquisitions. For instance, Teladoc acquired Arizona-based Stat Doctors in June 2015 for a deal of about USD 30.5 million. This move by Teladoc is assumed to expand its reach and increase its member base.

Nationwide lockdown and fear of acquiring the viral Covid-19 infection are keeping the majority of the population indoors. This is making people turn to online doctors for advice even for mild symptoms. Additionally, the U.S. Presidentâ€™s authorization for an expansion of Medicare covering telehealth services is resulting in significantly high demand for the same. Such a high inflow of patients has left most service providersâ€™ underprepared in terms of both access and capacity. We at GVR are constantly monitoring how these service providers are ramping up their capacity to overcome these challenges. Book a copy to keep up with this paradigm shift in the market dynamics.