The U.S. high-density polyethylene plastic pails market size was estimated at USD 180.1 million in 2018 and is anticipated to expand at a CAGR of 4.8% over the forecast period. The surge in construction activities and the high demand for High-Density Polyethylene (HDPE) pails from the paints and coatings industry are among the key factors expected to drive the growth.

Commercial construction, specifically, has been bolstering the demand for HDPE plastic pails. Commercial construction activities have been predominant in the form of malls, restaurants, and offices in the country. Furthermore, the ongoing construction of skyscrapers is expected to fuel the demand for the pails. For instance, the Central Park Tower (1,550 feet), expected to be completed by 2020, is a highly anticipated addition to New York’s high-end residential industry. Such structures are likely to further boost product sales. 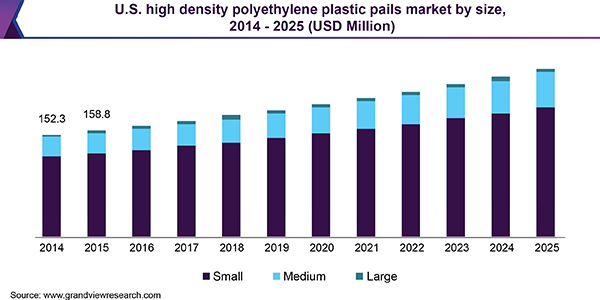 The overall construction spending in the U.S. increased from USD 1.12 trillion in 2015 to USD 1.32 trillion in 2018. The industry is anticipated to continue witnessing a similar rise in spending in the forthcoming years. Chicago, New York, San Francisco, Los Angeles, Austin, Philadelphia, and Boston are among the main cities witnessing robust construction activities across the U.S.

The soaring construction projects in the country are anticipated to continue witnessing a rise owing to increasing foreign and domestic investments. The Washington State Convention Center, Seattle; the Comcast Technology Center, Philadelphia, Atlanta Falcons Stadium, and One Thousand Museum in Miami are some of the major construction projects that have significantly increased the demand for high-density polyethylene plastic pails in the U.S.

The U.S. high-density polyethylene plastic pails market is driven by the increasing demand from the paint packaging sector. Several favorable factors have paved the way for the growth of the U.S. paint packaging industry in recent years. Prominent among them are the increasing number of construction projects backed by a growing need for industrial production and increasing spending on paint in the aerospace industry.

The market is also driven by rising exports and imports of paints. The country exports its paint products principally to Mexico, Canada, and China. Most of the paint products in the U.S. are largely imported from countries such as Japan and Germany. The rise in export and import operations calls for efficient packaging products to protect products in transit. This, in turn, has reflected positively on the growth of the U.S. market for high-density polyethylene plastic pails.

In terms of size, small-sized pails held the dominant market share of 78.1% in 2018 and are expected to retain its prominent position throughout the forecast period. This segment is driven by the rising demand for ease of use in plastic pails. From a manufacturing standpoint, the production of smaller formats of high-density polyethylene pails allows for greater production runs. Furthermore, these smaller formats also facilitate the function of printing or labeling.

The small-sized plastic product type is ideal for the packaging of paints, adhesives, and coatings among other similar applications. These smaller formats of pails have been embraced by small, medium, and large manufacturers alike owing to their extensive product portfolios. These pails are also being increasingly used for storing latex paints and colorants among other water-based materials/substances. 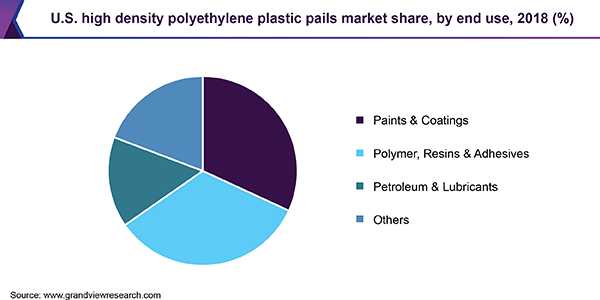 The high-density polyethylene products are typically used along with other containers such as drums and totes for the packaging of adhesives and sealants in large quantities. The use of these products helps increase the shelf life of adhesives up to a year when sealed and stored appropriately. The five-gallon products are among the most commonly employed HDPE pails in the U.S. for packaging and storage of adhesives and other such liquids.

The southeast U.S. emerged as the largest segment in 2018 with a market share of 27.8% and is expected to retain its pole position throughout the forecast period. The region has been witnessing rapid developments in the construction space, thereby increasing the adoption of high-density polyethylene plastic pails for the packaging of construction materials.

The presence of manufacturing giants in aerospace and automotive sectors including Toyota Motor Corporation, BMW Group, and Airbus S.A.S. have strengthened the position of the region over the forecast period. Thus, the market is principally driven by the increasing demand and consumption of paints and coatings in the aerospace and automotive sectors in the Southeastern U.S.

Northeast U.S. market is driven by surging construction activities, principally in the form of libraries, medical buildings, office buildings, restaurants, shopping centers, sports and entertainment complexes, and office buildings. Thus, the demand for high-density polyethylene in Northeast U.S. emanates from the increasing consumption of paints, coatings, adhesives, and additives, as is the case in other regions of the country.

California dominates the economic profile in the Western U.S. with a population of approximately 39 million. Thus, California has a considerable impact on the manufacturing sector of the country. The state of California is also among the leading industrial states in the country, most notably in the fields of machinery, aerospace, food processing, and fabricated metals. Thus, it has been fueling the demand for high-density polyethylene plastic pails owing to the increasing consumption of paints and coatings in the manufacturing sector. California is also the largest market for paints and coatings in the U.S.

The market is mature and has not significantly witnessed strategic initiatives deployed by key players over the years. The key players have established agreements with prominent end-users across the U.S., thereby allowing themselves to remain ahead of the competition.

Furthermore, major players operate through a well-established distribution chain within the country. In this regard, key players market their products through reputed distributors in the U.S. For instance, M&M INDUSTRIES distributes most of its HDPE plastic pail products through Champion Container, a New Jersey-based distributor of packaging products.

This report forecasts revenue growth at the country level and provides an analysis of the latest industry trends in each of the sub-segments from 2014 to 2025. For this study, Grand View Research has segmented the U.S. high-density polyethylene plastic pails market report based on size, end-use, and region: