The U.S. and Mexico yeast market size was estimated at USD 1.23 billion in 2014, growing at a CAGR of 7.8% from 2015 to 2022. Growing demand of bakery products, ongoing upward trend in alcoholic beverage consumption, and improved production of animal feed are major factors which will augment the market growth.

Rising health awareness, change in consumer lifestyle, and demand for high-nutrition convenience food are likely to boost industry growth. Manufacturing companies are actively meeting consumer demand to gain loyalty and strengthen their position in the value chain. Furthermore, importance of local bakeries is anticipated to push demand over the forecast period.

Biodiesel is one of the major applications of yeast. The U.S. is world’s leading biofuel-producing country. The nation primarily produces biodiesel and ethanol fuel, which use corn as main feedstock and grain stock for production. The U.S. is also a leader in development of advanced biofuels, particularly algae-based fuels that employ yeast in their manufacturing process.

Factors such as intense competition for basic raw materials and lack of awareness among the farmers regarding benefits of feed are few bottlenecks which will inhibit market growth over the forecast period. in addition, minimal government support and shrinking R&D budgets are anticipated to restrain the growth of yeast industry over the forecast period.

Molasses is one of the major raw materials used in manufacturing yeast. It is also used in manufacturing supplements that aid in reducing obesity, menstruation-related problems, enlarged prostate, and diabetes. Manufacturers are facing immense competition to source and procure raw material on account of increase in demand for molasses from other end-use applications.

Baker’s yeast segment emerged as a leader, accounting for 72.4% of the total revenue share in 2014. The demand for baker’s yeast is driven by the baked goods such as cakes and cookies which are marketed in U.S. Baker yeast is used in home and commercial baking of breads. It is widely present in numerous forms including cream yeast, compressed yeast, active dry yeast, instant yeast, rapid-rise yeast, and deactivated yeast.

Bioethanol yeast demand has been tremendously increasing over the past few years. The segment accounted for 15.7% revenue share in 2014 and is expected to grow at substantial rate over the forecast period. Bioethanol is the best suited substitute of fossil fuels in the U.S. to meet the current government regulation.

Bioethanol fuel is mainly produced by the sugar fermentation process. The growing concern to control the environmental degradation the automotive market in the U.S. has inclined towards the eco-friendly fuel usage which would lower down the harmful emissions. This is expected to propel segment growth over the next eight years.

Feed yeast is expected to grow at the fastest rate over the projected period owing to different benefits associated with it such as growth promotion, improvement of immune system, and enhancement of digestibility. Feed yeast is a feed supplement which is made from yeast culture or is the by-product of the brewery.

Food & beverage segment was emerged as a dominant application in 2014, accounting for 63.9% of the overall industry revenue. The application is expected to gain traction over the coming years owing to its high percentage use in fermentation of sugars in the growing bakery sector. Key factors that have contributed to rising demand include population growth and high purchasing power of consumers.

Bakery products, alcoholic beverages, and non-alcoholic beverages are major applications within this segment. Demand for yeast in this industry has gained popularity due to its extensive use in fermentation of sugar. It forms an essential component in the baking process and variants of baker’s yeasts are used at different levels in production of baked goods. 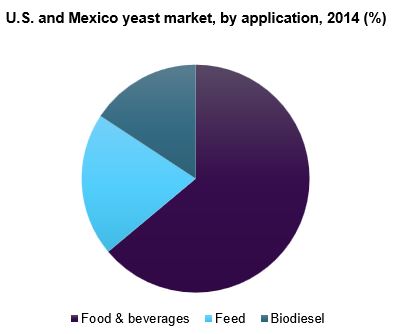 Feed was the second largest application that accounted for 20.4% of the total revenue share in 2014. The feed market is expected to grow significantly in Mexico, with major sources of the country engaged in agriculture and Mexico being a key source for the food, dairy and fiber products.

Biodiesel was the fastest growing application segment in 2014. The U.S. witnessed a rapid rise in production of biodiesel over the past few years on account of supportive government regulations. It has become potential renewable & environment friendly fuel substitute for petroleum diesel, which is extracted from edible plants.

The U.S. was the largest market for yeast, accounting for 64.3% of the total revenue share in 2014 and is expected to continue its dominance over the forecast period. the growth of industry is attributed to high consumption of alcoholic beverages. In addition, rising demand for bakery products in the country on account of increasing need for comfort food is expected to have positive impact on the industry over the next eight years.

Growth in consumer preference for fresh and healthy food products containing natural ingredients is likely to drive demand. The easy availability of raw materials such as saccharides and other sugar derivatives at a cheaper price is expected to drive industry demand over the forecast period. demand for bakers and wine yeast is expected to increase over the projected period.

The market in Mexico is likely to grow over the forecast period on account of high consumption of alcoholic beverages and processed food, change in eating patterns, and rise in disposable income. The usage of yeast and its derivatives have seen a significant growth in the Mexico beer industry due to their ‘easy to drink’ ability.

Mexico yeast industry for food and beverages was expected to witness high growth rate over the projected period. This can be attributed to rising use of yeast in baked products as a fermenting and rising agent. In addition, tremendous growth in the food and beverage sector in the country owing to growing population and increasing food demand is expected to boost industry growth in the forecast period.

Leading market players are channelizing their efforts in the development of new products and technologies, utilizing advanced methods to manufacture yeast strains effectively and efficiently. On account of this, the yeast and specialty yeast products are gaining consumer’s confidence around the world.

Market players are actively involved in engineering and manufacturing a wide variety of products. They have been offering clients industrial expertise coupled with local services, which are closely aligned to consumer needs. Yeast manufacturers including Biosev, Lallemand Inc., Alltech Inc. are integrated, wherein they procure and produce the raw materials, namely sugarcane and molasses lactose, used for manufacturing yeast.

These companies are adopting and implementing various strategic plans to manufacture yeast & specialty yeast products across the globe. Globally, the market players are entering into agreements, joint ventures, mergers, and acquisitions to strengthen their market share and geographical presence.