The global varicose vein treatment market size was valued to be over USD 883 million in 2015. The emergence of progressively less-invasive treatment procedures coupled with the growing geriatric population base is expected to propel the market growth over the forecast period.

The varicose vein treatment market of Europe and North America is majorly driven by the bettering patient compliance owing to the advent of durable and safe techniques to address the huge burden of varicose vein incidences and the increased access to varicose vein medical devices. In addition, the healthcare industry has experienced a new trend of removing or destroying the surface veins with enhanced patient experience. 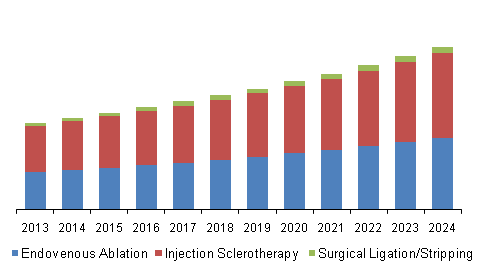 The emerging endovenous ablation procedures have replaced the former approach of highly invasive, stripping and ligation of veins to correct venous insufficiency. Theendovenous ablation techniques can be classified into two broad categories: thermal tumescent (TT) and non thermal non tumescent (NTNT). The TT techniques, such as steam, radiofrequency, and laser ablationtechniques, employ the use of tumescent anesthesiaand have been characterized as safe and efficacious, but these procedures are riddled with a certain amount ofdiscomfort and a few side effects.

The radiofrequency-based ablation technique gained FDA approval in March, 1999. The numerous side-effects associated with TT therapies have been addressed by the newer NTNT techniques, such as sclerotherapy with sclerosants and foam sclerotherapy; both do not involve the administration of perivenous tumescent anesthesia thus, making it a minimally invasive procedure.

Sclerotherapy, stripping, and endovenous ablation are the basic treatments available in the varicose vein market. As of 2014, the ultrasound and sclerotherapy segment dominated the varicose vein treatment market owing to the benefits, the requirement ofminimal incision during the treatment procedures, and reduced scaring.

Moreover, the market is further propelled by the following advantages associated with the non thermal non tumescent procedures (NTNT): effectiveness of cost and time, no requirement of anesthesia, painless procedure, reduced risk of collateral damage to surroundings tissues, and low risk of postoperative complications. These factors altogether support market penetration of these products.

The endovenous ablation market is expected to the fastest growing treatmentsegment due to the short treatment time and the improved blood circulation after the procedure. In 2015, sclerotherapy market experienced a rapid growth due to polidocanol and other sclerosing agents used in the treatment of both, varicose vein and spider vein treatments. The FDA approved these sclerosing agents in 2010,which is further expected to drive the market growth in the U.S.

These procedures were earlier carried out by the vascular specialists but now are used by both, dermatologists and radiologists. The expansion of the user profile is expected to boost the demand for varicose vein procedures.

The surgical stripping segment is expected to exhibit constant growth in this market, as long-term outcomes of recently introduced minimally invasive therapies are not determined. In 1931,radiofrequency was discovered as a non-surgical therapy and as an effective treatment for the relief of chronic pain. Radiofrequency ablation, which is carried out by Venefit VNUS closure procedure is an office-based varicose vein treatment procedure. It utilizes oscillating radiofrequency waves to create focused heat energy to ablate varicose veins.

In 2011, the U.S. FDA cleared the ClosureFast 3-cm endovenous radiofrequency catheter, which is used to treat short refluxing vein and provides fast patient recovery. According to the NCBI, radiofrequency ablation procedure works well in 97 patients out of 100.

In 2015, the Endovenous Laser Treatment (ELT), entirely done under local anesthesia without any surgical incision, dominated the market. The post-operative discomfort is less in ELT as compared to that in the standard operation of ‘high tie and stripping’ method. Majority of the vein specialists prefer minimally invasive ELT methods or the latest ClariVein technique over the standard operation method. ClariVein is a less invasive technique in comparison to the venous closure and laser technique for varicose vein treatment. In December 2010, Spire Cambridge Lea Hospital was the first hospital to offer this new treatment in the East of England for varicose vein treatment.

In 2015, The U.S. FDA approved the VenaSeal Closure System (Medtronic) to treat varicose veins of legs by sealing the affected superficial veins using an adhesive agent. The U.S. clinical study established that the VenaSeal system is safe and effective for vein closure in the treatment of superficial varicose veins in comparison to the radiofrequency ablation treatment.

In 2015, North America held the largest share in the varicose vein treatment market owing to the increasing incidence of varicose vein cases, high disposable income, advanced healthcare infrastructure, increasing disorders, and an upward trend in the adoption of unhealthy lifestyles. In 2014, more than 40 million populations in the U.S. suffered from varicose vein treatment. The increasing reimbursement policies in the U.S. are further expected to propel the market growth. For instance, when medically necessary, VenaCure EVLT procedure is medically covered through various codes comprising 36478 and 36479. For the in-office procedures, the Center for Medicare and Medicaid Services (CMS), in 2011 established the unadjusted national average medicare reimbursement. Hospital Outpatient Department (HOPD) is also compensated on the Ambulatory Payment Classification (APC) 0092. Payment for the Ambulatory Surgical Centers(ASC) is covered under USD 1117.

Asia Pacific is expected to be the fastest growing market due to the improving healthcare infrastructure, increasing patient awareness, rising disposable income, and benefits of early treatments for varicose vein cases.

As of 2015, Medtronic plc, AngioDynamics, Inc., and Biolitec AG together held majority of the share of the varicose vein treatment market. New product launches, agreements, and strategic acquisitions were the major strategies adopted by the market players in the varicose vein treatment market. In 2015, Medtronic plc acquired Covidien plc, with the aim of focusing on accelerating three core strategies of Medtronic plc, which comprises therapy innovation, economic value, and globalization.