The global vegan eggs market size was valued at USD 141.3 million in 2021 and is expected to expand at a compound annual growth rate (CAGR) of 16.7% from 2022 to 2030. The growth of the market is significantly attributed to the increasing consumption and rising awareness regarding plant-based eggs. As the population across the world is increasing, demand for plant-based foods is rising. According to the Vegetarian Resource Group, around 2% of Americans were vegans, which is increasing continuously. Also, in the U.K., according to The Vegan Society, in 2019, 1.21% of the population were identified as vegan, an increase from 0.46% in 2016. The rising population and vegan trend are the major drivers of the market. 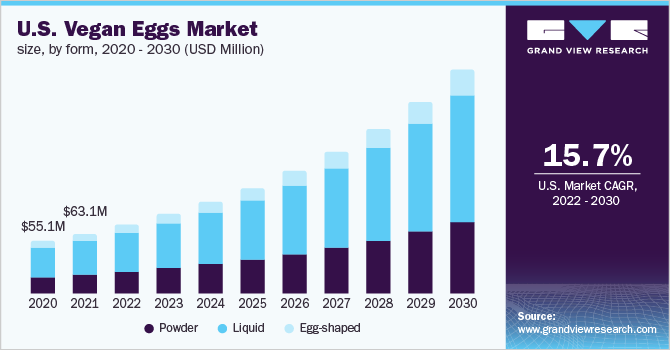 The outbreak of the COVID-19 pandemic had a positive impact on the global industry. As a result of the Covid-19 pandemic, consumer demand and inclination toward the consumption of plant-based products increased. Consumption of meat products and animal products decreased due to the fear of diseases. According to The Good Food Institute, the plant-based food market in the U.S. recorded 27% year-on-year growth from 2019 to 2020. Over the forecast period, the market is expected to witness strong growth with an overall positive perception of consumers regarding plant-based products.

The global market is driven by increasing concerns over the environment and climate change. The meat and animal products industry is responsible for about 60% of the greenhouse gas emission from food production. A recent study found that animal-based food is responsible for double the pollution of plant-based foods. Grazing and rearing animals require a lot of land and resources compared to the plants, which is made available through deforestation, resulting in a worse effect on the climate. The rising concern over climate change and the rising shift toward plant-based foods are expected to drive the market.

Additionally, new product launches, increasing awareness, and approvals from the safety authorities are some of the important factors impacting the industry growth. For instance, Eat Just’s vegan mung bean egg received approval from the European Commission as reported in April 2022. Eat Just collaborated with Analyze and Realize GmbH for the compilation and EFSA and Commission submission. The company is planning to launch in the European countries following this approval. Furthermore, in March 2022, Berlin-based Perfeggt announced plans to launch its plant-based egg product in other European countries including the U.K., Austria, and Switzerland.

The high cost associated with plant-based eggs is one of the major factors limiting the growth of the industry. Price is among the main decisive factors for consumers besides taste and mouthfeel. Considerably high difference between vegan eggs and conventional eggs acts as a limitation for the industry growth. Moreover, food-borne allergies are likely to affect industry growth. Soy-based eggs, which are a cost-effective option, have major limitations due to the allergy induced by the abnormal response to the soy proteins. These are some of the factors limiting industry growth.

Vegan eggs based on algal flour and algae protein are expected to have promising growth opportunities in the global market. Algal flour contains high proteins and nutrient contents, and is a good source of fiber and essential amino acids, imitating conventional eggs. Moreover, algae have carrageenan and algin compounds, which are present in algal flour and act as thickeners. Hence, algae-based vegan eggs scramble produces a good result and good mouthfeel.

In 2021, the liquid segment accounted for the largest revenue share of over 55.0%. This is attributed to the consumer's high preference for liquid plant-based eggs in the market. As compared to their counterparts, liquid vegan eggs provide a more suitable option for consumers for frying, scrambling, and baking purposes. Liquid vegan eggs are an easy-to-use and convenient option, which is accountable for the higher consumer inclination towards the product. However, in this type of product, separation of egg yolk and egg albumen is not possible, which tends to be a potential limitation.

The powder segment is estimated to register a growth rate of 16.6% during the forecast period. The growth of the segment is facilitated by the increasing product launches and increasing consumer accessibility for the products across the world. For instance, in February 2020, Noblegen launched vegan whole egg powder, a direct-to-consumer product through its New Food and Ingredient Brand, Eunite™ website. The product is made from euglena flour and can be used in various recipes such as pancakes, sandwiches, and quiches. Also, in October 2020, Zero Egg launched plant-based egg powder in the U.S. market on World Egg Day. The product is a blend of soy, pea, potato, and chickpea proteins, with zero cholesterol, low fat, and low calories.

In 2021, the offline distribution channel accounted for the largest revenue share of over 85.0%. This can be significantly attributed to the majority of the product placement at the brick-and-mortar grocery stores compared to the online store. The market is collectively niche and emerging and most of the players engage in selling via grocery stores, supermarkets, and hypermarkets. In the stores, products are also often placed closer to the conventional products to increase consumer inclination and increase target reach. 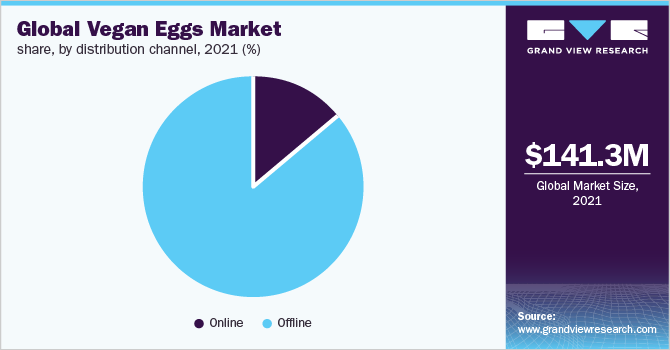 During the forecast period, the online distribution channel is estimated to register a lucrative CAGR of 17.5% from 2022 to 2030. The increasing availability and accessibility of internet connections and increasing coverage of the mobile network are likely to increase the use of online shopping portals. According to the GSMA, mobile internet connection globally is continuously increasing owing to affordability. Additionally, the growth of the online distribution channel is facilitated by the shift in the consumer profile. Globally, overall, most vegans are aged 35 and under. Millennials and generation z are the most prominent consumer group for the vegan egg market. This consumer group is also more techno-savvy and dependent on e-commerce for daily needs, which is expected to drive the online distribution channel.

North America captured the largest revenue share of over 50.0% in 2021. The regional market is growing due to the rising demand for processed meals that are vegan. Additionally, factors such as elevated environmental sustainability consciousness and the tendency among consumers toward vegan diets are all factors that are positively influencing the industry growth. Vegan eggs are becoming more and more popular in the U.S. and around the region, where they are used in everything from healthful snacks and drinks to plant-based delicacies like veggie burgers and meat substitutes.

In 2021, the European region held a significant revenue share. This is attributed to the higher consumer awareness regarding plant-based eggs. According to the European Commission, the total plant-based products market in Europe accounted for € 3.6 billion in 2020, equating to USD 4.1 billion. European consumers are more accepting and positive toward plant-based products. Furthermore, the presence of key players and organized retail channels with a wider presence of products is contributing to the growth. 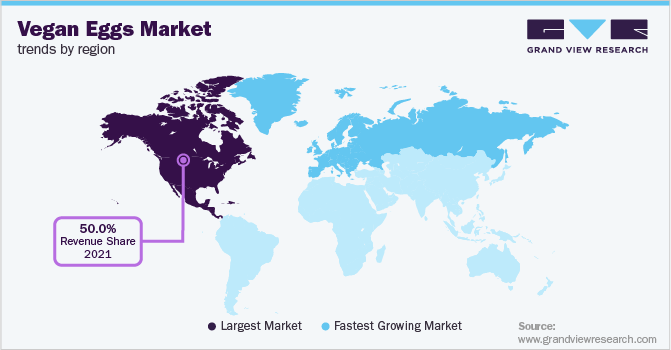 Asia Pacific is expected to expand at a CAGR of 18.87% during the forecast period. The emergence of new players in the region and a subsequent rise in awareness regarding plant-based food are anticipated to propel the growth during the forecast period. For instance, Evo Foods, dealing in plant-based eggs secured USD 845K in funding and announced gearing up an Indian launch as well as an international launch in 2022. The company products include 100% vegan liquid eggs made from lentil proteins. In another instance, as reported in July 2021, Japanese food tech company, Next Meat launched a plant-based egg, Next Egg 1.0.

Some prominent players in the global vegan eggs market include:

This report forecasts revenue growth at the global, regional, and country levels and provides an analysis of the latest industry trends and opportunities in each of the sub-segments from 2017 to 2030. For this study, Grand View Research has segmented the global vegan eggs market report based on form, distribution channel, and region: 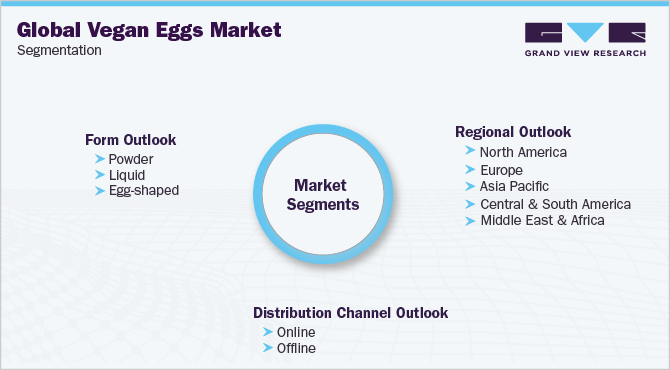 How big is the vegan eggs market?

What is the vegan eggs market growth?

Which segment accounted for the largest vegan eggs market share?

b. North America dominated the vegan eggs market with a share of 54.62% in 2021. This is attributable to increasing consumption and rising awareness about plant-based eggs.

Who are the key players in vegan eggs market?

What are the factors driving the vegan eggs market?

b. Key factors that are driving the vegan eggs market is the rising demand for processed meals that are vegan. Additionally, factors such as elevated environmental sustainability consciousness and the tendency among consumers toward vegan diets are all factors that are positively influencing the market growth.