The global vegan snacks market size was valued at USD 44.02 billion in 2021 and is expected to register a compound annual growth rate (CAGR) of 6.9% from 2022 to 2030. The rising demand for vegan products across the globe due to health benefits coupled with increasing veganism is one of the major factors propelling the growth of the industry. The intake of vegan food, such as snacks, helps improve gut health and support the immune systems and reduce inflammation, owing to these benefits, consumers are adopting vegan food in their snack routine that further supporting the growth of the market growth. On the other hand, the availability of various substitutes for vegan snacks is projected to restrain the industry growth during the forecast period. 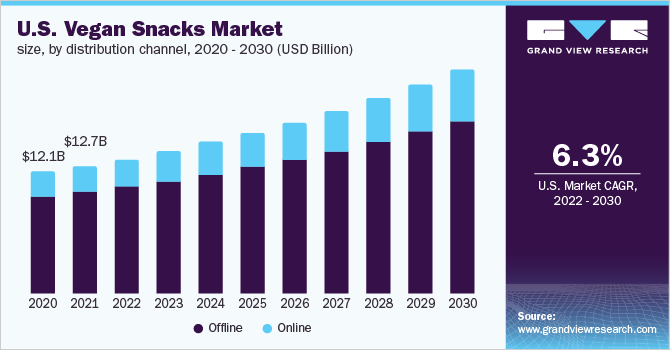 The high processing cost of vegan snacks further hinders the adoption of these snacks in low- and middle-income countries, which may hamper the industry growth during the forecast period. However, a significant number of product launches in plant-based snacks by the manufacturer are projected to provide lucrative growth opportunities for the industry. Significant demand for healthy vegan snacks during the pandemic positively impacted the industry. During the COVID-19 pandemic, the healthcare expert recommended a daily intake of nutritional food to maintain the immunity of the body. Moreover, the rise in snacking habits further supported the market growth positively. As per the survey, around 40% of the U.S. population admitted the growth in the consumption of plant-based snacks in the country.

Rapid growth in online sales of plant-based food products during the lockdown period supported the industry growth. Moreover, the increasing vegan population across the globe contributes to the growth of the industry. Major countries, such as the U.S., the U.K., Australia, Canada, and India, are contributing significantly to the growth of the industry due to the rising veganism. As per a survey by the Vegetarian Resource Group in 2020, around 3% of respondents were vegan in the U.S. Moreover, the growing trend of veganism among celebrities and athletes across the globe is projected to provide ample growth opportunities to the market. Various organizations claimed the growth in the vegan population across the globe.

For instance, in the U.K., as per a survey conducted by the Vegan Society in collaboration with Vegan Life magazine, there was around 360% growth in the vegan population. In Canada, the vegan population increased by 250% reaching around 850,000 vegans as per the survey data. Australia is second only to the U.K. in terms of plant-based eating likings as per the 2020 report survey. In addition, the growing health concerns boost the adoption of vegan food products including vegan snacks. The harmful effects of animal-based food products on human health further encourage people to choose vegan snacks over animal-based food products. For instance, as per research, the intake of red meat can increase the risk of mortality due to stroke, diabetes, and heart disease. Animal-based foods also support the unhealthful gut bacteria that cause various diseases.

On the basis of products, the global industry has been further classified into nuts & seeds, bakery, savory, confectionery, and others. Among these, the savory product segment accounted for the largest share of more than 51.00% of the global revenue in 2021. The industry is mainly driven by the significant demand for plant-based savory snacks among the working-class and college-going population in developed economies, such as the US, the U.K., and others. Moreover, savory snack foods permit people to fulfill their cravings and help avoid overeating habits. Manufacturers are introducing various vegan savory snack products, such as crackers, baked chips, and others, that have health benefits.

The bakery segment holds a significant share in the global industry. The segment is mainly driven by the significant demand for vegan bakery products, such as cookies, pretzels, pastries, cakes, and others. A wide range of products offered by key manufacturers, such as Danone S.A. and Daiya Foods Inc., is further projected to fuel the segment growth during the forecast period. In addition, the rapid expansion of the vegan bakery industry in the U.S., the U.K., Germany, and France contribute to the segment growth.

On the basis of distribution channels, the global industry is further categorized into offline and online channels. Among these, the offline distribution channel segment dominated the industry in 2021 and accounted for the largest share of around 80% of the overall revenue. The offline distribution channel segment comprises convenience stores, specialty stores, hypermarkets, and supermarkets. A significant rise in the number of supermarkets and hypermarkets has increased the overall sales of vegan snacks. Owing to the easy access and availability, consumers prefer shopping from brick-and-mortar grocers.

Moreover, the offline stores offer a wide range of options as well as the facility of scanning the product details before any purchase, thereby supporting the segment growth. The online distribution channel is expected to expand at the fastest CAGR from 2022 to 2030 owing to the growing usage of the internet as a result of the widespread usage of smartphones and other such devices. Moreover, various e-commerce companies, such as Amazon and JD.com, are partnering with vegan snacks manufacturers and retail stores to provide grocery items through their online channels. Therefore, the rising partnership activities between e-commerce and retail stores create significant growth opportunities for the segment.

North America dominated the global industry in 2021 and accounted for the largest share of more than 35.00% of the overall revenue. The regional market is mainly driven by the increased concerns regarding animal cruelty in the food industry and its negative impact on the environment. Therefore, significant growth in plant-based retail sales in the U.S further contributed to the industry growth. 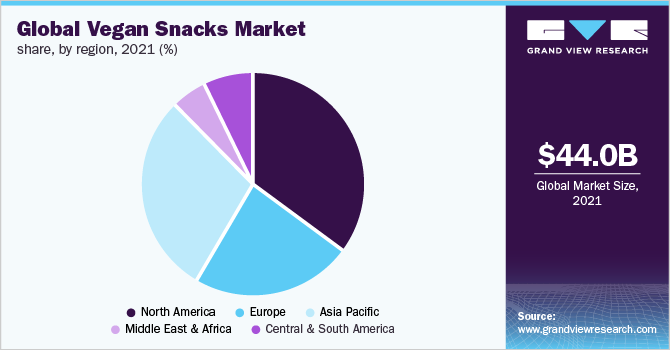 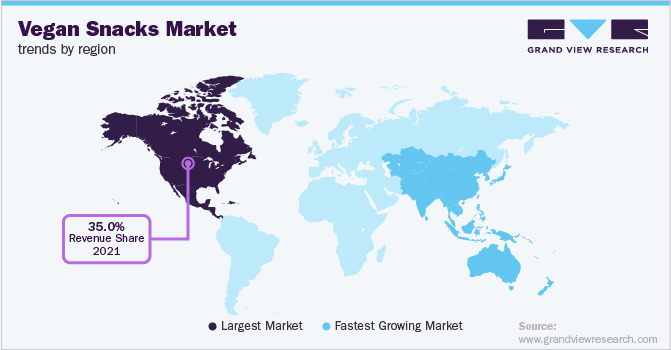 The Asia Pacific is expected to emerge as the fastest-growing regional market during the forecast period. The market is mainly driven by the rising awareness regarding the health benefits of vegan foods. The growing concern about animal cruelty further increases the demand for plant-based foods in major countries, such as India and China. Also, significant growth in the snack industry in these countries creates lucrative growth opportunities for the market.

The rising demand for flavored snacks has widened the growth opportunity for vegan food manufacturers. Thus, the new product launch has been a major competitive strategy in the global industry. To fulfill the rising consumer demand, manufacturers are launching new products that are healthy, convenient, and tasty. For instance, in 2021, MondelÄ“z International launched the Fuse Fit snack bar in the Indian market. Some of the prominent players in the global vegan snacks market include:

This report forecasts growth at global, regional, and country levels and provides an analysis of the latest industry trends in each of the sub-segments from 2017 to 2030. For the purpose of this study, Grand View Research has segmented the global vegan snacks market report based on product, distribution channel, and region: 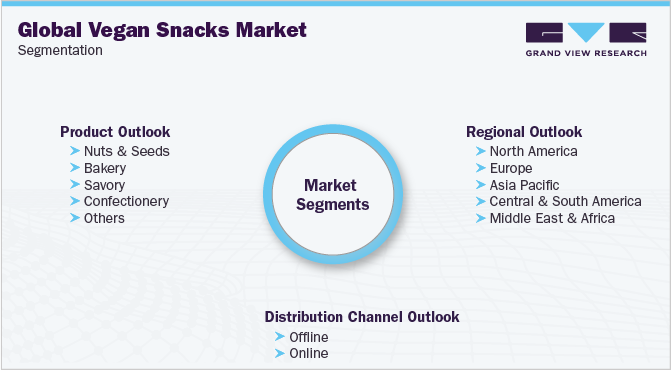 How big is the vegan snacks market?

What is the vegan snacks market growth?

Which segment accounted for the largest vegan snacks market share?

b. North America dominated the vegan snacks market with a share of 35.3% in 2021. This is attributable to increased retail sales of plant-based food that increased by 6.2% and reached around 7.4 billion in 2021 in the U.S. as per the Plant-Based Foods Association.

Who are the key players in the vegan snacks market?

What are the factors driving the vegan snacks market?

b. Key factors that are driving the vegan snacks market growth include the growing demand for plant-based snacks across the globe, significant product launches in the vegan food industry, the rising trend of veganism in U.S., UK, Australia, Canada, and India, and the growing popularity of plant-based confectionery products.