The global veterinary stereotactic radiosurgery system market size was estimated at USD 1.9 billion in 2018 and is expected to witness a CAGR of 11.4% during the forecast period. Increasing adoption of Stereotactic Radiosurgery (SRS) for the treatment of cancer in pets coupled with an upsurge in pet population is primarily driving the market growth. For instance, a published study veterinary and Comparative Oncology in 2015 described the successful usage of frameless stereotactic radiosurgery for the treatment of intracranial tumors in dogs with favorable clinical outcomes. Factors, such as government initiatives, increasing investments in the animal healthcare industry, and rapid technological advancements in noninvasive SRS systems are anticipated to further fuel the market. 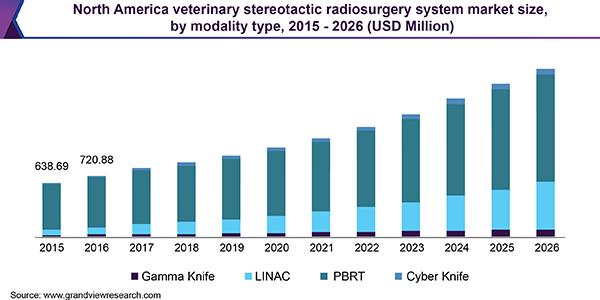 In February 2019, a new facility featuring radiation therapy for pets was opened at the College of Veterinary Medicine. It features advanced Stereotactic Radiation Therapy (SRT), which sends high-dose radiation focused at the small and accurate area. Increasing adoption of refurbished stereotactic machines for veterinary use to curb the high procedural cost is another growth promoter for the market. Refurbished devices aid the pet owners by lowering the treatment cost thereby increasing adoption in near future.

The rising population of pets coupled with a high prevalence of cancer in them is further escalating the market for veterinary stereotactic radiosurgery systems. For instance, in 2019, according to the Veterinary Cancer Society, cancer was the leading cause of mortality causing deaths of 47% of dogs over the age of 10 years and 32% of cats. Therefore, the rising cases of is leading to demand an effective stereotactic radiosurgery treatment for companion animals.

Also, according to the Survey of Stereotactic Radiation Therapy in Veterinary Medicine in Veterinary Radiology Ultrasound in 2018, the study evaluated that SRT treatment is carried out at various facilities, the result of the study evaluated, a median of 4.5 canine cases and one feline case per month. Research studies about the use of SRT treatment as veterinary medicine are further anticipated to provide lucrative growth platforms to this market in the forthcoming years.

Particle Beam Radiation Therapy (PRBT) held the largest market share in terms of revenue in 2018. Advantages, such as minimal irradiation to the healthy tissues and effective treatment even with low radiation dosage are some of the key growth drivers for the segment. According to a published article Proton Beam Therapy for Cancer in the Era of Precision Medicine in the Journal of Hematology & Oncology in2018, PRBT delivers the radiation dose on a tumor cell and deliberates very less or no irradiation effect to the surrounding tissue and organs. The treatment results in maximum tumor control and decreases tumor toxicity to an extreme extent.

LINAC based stereotactic radiosurgery treatment followed PBRT, owing to its increased adoption for veterinary use. In 2017, Veterinary CyberKnife Cancer Center installed Varian linear accelerator for pet treatment with a cancerous tumor. The installed LINAC system complemented the CyberKnife technology, to irradiate multiple forms of cancer. Increasing adoption of the LINAC based radiosurgery system as a method of treatment for animals is fostering the growth of the veterinary stereotactic radiosurgery system market.

Furthermore, CyberKnife and Gamma Knife are anticipated to expand at a CAGR of more than 11.0% over the forecast period. These technologies are still in their nascent stage and are anticipated to witness rapid adoption in near future. As these technologies are helping veterinarians to treat lung or liver tumors, historically untreatable with the use of radiation therapy.

North America is projected to dominate the market over the forecast period, owing to the increasing number of cancer incidence in the pet population, rising pet companionship along with the surge in the willingness to spend on their pets, and government initiatives for SRT treatment. According to the U.S. Pet Ownership Statistics 2018/2019, American Pet Product Association (APPA) states that 68% of the households own a pet. A total number of 90 million dogs and 94 million cats are present in the country. The presence of non-profit organizations such as APPA catering to the needs and interests of pet products and services is further fueling the regional market growth. 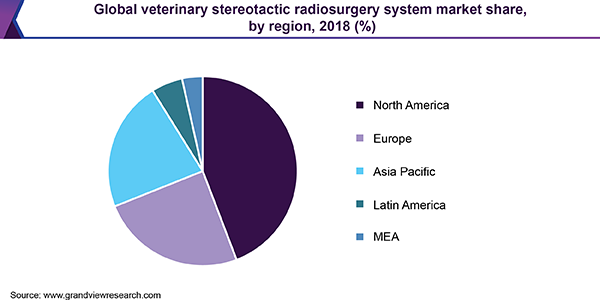 Furthermore, increasing research studies being conducted to test the safety and efficacy of SRT in animals is also driving the market growth in North America. For instance, in December 2017, the Department of Clinical Sciences at Auburn University carried out a research study titled Safety and Feasibility of Stereotactic Radiotherapy Using Computed Portal Radiography for Canine Intracranial Tumors. The study concluded that stereotactic radiosurgery treatment using computed portal radiography may be a safe diagnostic option for dogs with intracranial tumors.

Europe's market for veterinary stereotactic radiosurgery systems is anticipated to be the second-largest regional segment in terms of revenue over the forecast period. Government initiatives for research and development activities and the establishment of new centers to carry out research activities in veterinary radiation oncology are the factors anticipated to fuel the growth. For instance, in May 2017, the Cancer Therapy Unit QVSH, University of Cambridge, was the first veterinary radiation center in the country, to receive approval by the European Colleges of Diagnostic Imaging (ECVDI) and Internal Medicine (ECVIM). The establishment of these centers focused on veterinary oncology is further boosting the market growth.

The Asia Pacific held the third-largest market share in 2018 and is expected to witness significant growth over the forecast period owing to increasing awareness about various treatment methods for pets, willingness to spend more on veterinary health, and rising number of animal health awareness programs. The Middle East and Africa held a very small market share of SRT treatment due to the increasing incidence of euthanasia and pet abonnement and despite economic and political problems in the region, the pet industry remains resilient over the years.

The market is marked by the presence of very few key players and is oligopolistic. PetCure Oncology, Accuray, Varian Medical Systems, and Elekta AB are some of the key market players. Most players focus on implementing new strategies such as mergers and acquisitions, regional expansions, new product launches, partnerships, and distribution agreements to increase their revenue share. For instance, in 2017, PetCure Oncology opened its eighth location in the U.S. and partnered with South Carolina Veterinary Specialists and Emergency Care in Columbia. The company has treated more than 1200 animals since 2015 using SRT.

PetCure is also involved in several R&D activities, to increase awareness pertinent to the effectiveness of stereotactic radiosurgery in cancer treatment. For instance, in October 2019, PetCure Oncology, presented its findings at the recent Veterinary Cancer Society Annual Conference (VCS), for nine of the 11 tumor types (nasal, brain, osteosarcoma mast cell, and melanoma). The findings showed improved median survival time and concluded that stereotactic radiation treatment can be considered as a gold standard treatment of many tumor types in pets, similar to human cancer treatment.

This report forecasts revenue growth at global, regional, and country levels and provides an analysis of the latest industry trends in each of the sub-segments from 2015 to 2026. For this study, Grand View Research has segmented the global veterinary stereotactic radiosurgery system market report based on modality type and region: