Vietnam animal feed market is characterized by a high number of imports and numerous, often contradictory regulations implemented by agencies, such as the Ministry of Agriculture and Rural Development (MARD). The industry is also highly dependent upon the feed grain industry to obtain raw materials for feed production. Rising feed grain prices are thus expected to pose a challenge for profitability. 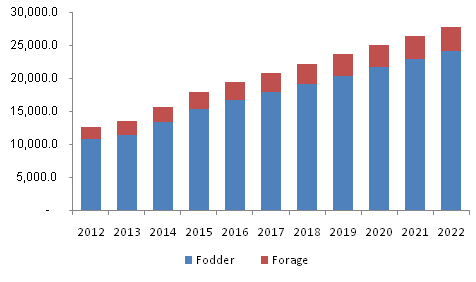 Growing regulatory pressure on companies has led to the adoption of hygienic animal husbandry practices. Emerging technologies and demand for higher quality meat products at lower prices have led to the development of efficient breeding processes utilizing statistical methods to determine genetic changes and characteristics.

Economic growth has fostered increased consumer income, most of which is diverted into the meat market contributing to animal feed demand. Numerous governmental schemes such as the ‘Livestock Development Strategy’ have contributed to rising domestic meat production and consumption. Poultry feed was the highest consumed product owing to consumer preference for ‘white’ chicken and duck meat.

Commercial animal feed products include fodder and forage. Fodder was the largest product with global consumption estimated at 13,542.0 kilo tons in 2014. Fodder is expected to grow at an estimated CAGR of 6.6% over the forecast period. Fodder is agricultural foodstuff such as plants cut and carried to animals or processed food, used specifically by breeders to nourish domesticated livestock and cattle.

On the basis of livestock, the global industry is segmented into poultry, cattle, pork or swine, aquaculture, and others such as camel, deer, goats, and sheep.  Increasing consumer demand for chicken, quail, and duck meat is expected to boost poultry meat demand. Poultry feed accounted for the highest share of 39.5% in 2014 and is expected to witness highest the growth of 6.6% CAGR over the forecast period. Pork feed followed the poultry feed segment in terms of market size and is projected to reach 8,605.7 kilo tons by 2022 at 6.2% CAGR.

Aquaculture feed is also rapidly gaining importance in Vietnam owing to innovative feeding systems developed to promote aquaculture nutrition and quality. The segment accounted for USD 355.3 million in 2014 which is projected to rise to USD 670.2 million by 2022. Other segments such as cattle feed are also expected to gain market share rapidly owing to the high demand for expensive beef products.  The industry is characterized by a high number of beef imports to cater to the rising demand for high-quality premium cuts.

The Vietnam animal feed market share is highly fragmented with domestic and international players vying for greater market share. Over 38.5% of the local market is occupied by numerous regional and multinational players. Charoen Pokphand (CP) Vietnam occupied a major share of 19.7% as of 2014. Major international players such as Cargill and Masan Group have large subsidiaries operating in Vietnam. The industry is characterized by increasing collaborations, alliances, and strategic initiatives between local players to obtain a higher share and eliminate foreign competition.