The global vitamin D testing market size was estimated at USD 498.1 million in 2016. Global rise in geriatric population coupled with increase in chronic illnesses, such as type 2 diabetes, kidney disease, Crohn's disease, and celiac disease, is anticipated to drive the growth of the market.

The group of people at high risk of developing vitamin D deficiency includes pregnant & breast feeding women, teenagers, infants, and children under 5 years of age. This also includes people above 65 years, individuals who have low or no sun exposure, and darker skinned people. 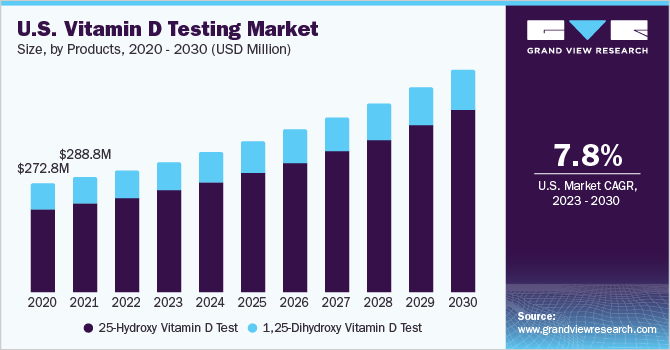 Furthermore, ongoing R&D activities, approval & commercialization of new tests, geographical expansion, and several government initiatives are likely to boost market growth during the forecast period. For instance, in the UK, various initiatives are underway to increase awareness about regular health screening amongst the low-income group, and they are likely to get free supplements through Healthy Start scheme. As per the American Osteopathic Association, nearly 1 billion people around the world have vitamin D deficiency. Hence, high incidence and availability of screening tests are likely to drive the market during the forecast period.

Two types of tests are used to measure the level of Vitamin D in the body, namely the 25 –Hydroxy Vitamin D (25 (OH)D; Calcifediol) and 1, 25-Dihydroxy Vitamin D (Calcitriol); based on which, the vitamin D testing market has been segmented into two parts.

In 2016, the 25 (OH)D test segment accounted for maximum market share and is expected to witness strong growth during the forecast period. This can be attributed to the availability of several products, recent commercialization, and the ability of the test to detect bone malfunctions accurately. For instance, in January 2015, Beckman Coulter Diagnostics received 510(k) clearance from the U.S.FDA for Access 25(OH) Vitamin D Total assay 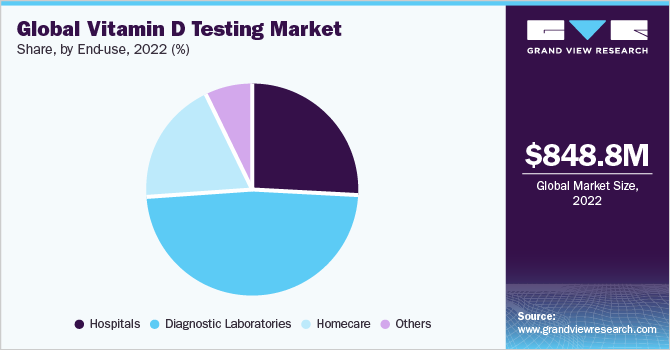 In June 2014, DiaSorin launched LIAISON XL assay outside the U.S. for quantitative determination of 1,25 Di-hydroxy Vitamin D level in human serum and plasma. This new assay is based on CLIA technology and is expected to further increase demand during the next few years.

North America dominated the global market, accounting for around 60% of the total market in 2016. This can be attributed to high awareness about regular screening, local presence of major players, and availability of several commercialized products in this region.

Asia Pacific was the fastest-growing region during the forecast period from 2017 to 2025, owing to commercialization of tests in Japan and China, growing demand in other emerging countries, such as India, and increasing expenditure on healthcare.

In July 2016, DiaSorin launched its CLIA 25 OH Vitamin D test in Japan after receiving approval of the reimbursement code from the Japanese authorities. Japan has about 13 million patients suffering from osteoporosis who will benefit from the test.

Germany, France, and Italy are the key markets in Europe, and Germany dominated in 2016. However, Spain, UK, and Switzerland are the emerging countries in this region. Good healthcare infrastructure, easy availability of products, high healthcare expenditure, and local presence of major players are the key factors driving demand.

Product development and commercialization along with geographical penetration are key strategies deployed by market players to remain competitive. For instance, in November 2014, Roche announced an investment of CHF 450 million to build a new diagnostics equipment manufacturing facility in China. The facility is expected to commence operations by 2018. Hence, through this manufacturing site, Roche is likely to capture the diagnostics market in China as well as Asia Pacific. Furthermore, in September 2013, bioMerieux launched its new assay in Europe namely VIDAS 25 OH Vitamin D Total.

This report forecasts revenue growth at global, regional, & country levels and provides an analysis on industry trends in each of the sub-segments from 2014 to 2025. For the purpose of this study, Grand View Research has segmented the global vitamin D testing market on the basis of type of test and region: